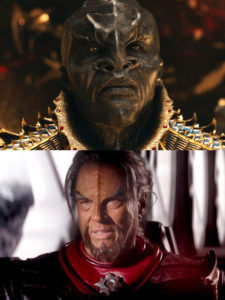 I really WANTED to like Star Trek: Discovery.  And to be honest, some things I actually DID like.  Sonequa Martin-Green put in a great performance playing the character of Commander Michael Burnham, and I loved the dynamic of seeing two women interacting as captain and first officer of a starship…and neither was caucasian!  (If only both characters could have continued beyond two episodes, but alas, we’ll soon be back to a captain who’s a white male.  Oh well, at least we’ve still got a black female lead.)

I even really liked some of the scenes…like when Burnham talks the ship’s computer into letting her out of the brig before power goes out.  But in the end, I just really didn’t enjoy the show overall—at least the first two episodes.  It was so dark (visually and emotionally), and I just couldn’t grab onto that uplifting feeling I used to get when watching Star Trek.  This new show felt so weighed down to me that even when things were moving quickly, they still seemed somehow slow and heavy.  A couple of times during those Klingon scenes with the never-ending subtitles, I nearly dozed off!

And it wasn’t even the Klingon actors’ fault they were so boring.  The decision to completely redesign the look of the Klingons not only alienated many long-time Trek fans, but it made it virtually impossible for those actors to deliver decent performances.

Imagine if you were asked to give a compelling performance while wearing a medieval suit of knight’s armor with the face-plate covering every part of your face except your mouth. You can barely move your head except a little side to side—very little!—and your arms won’t go any higher than your chest. You can’t even bend your elbows!  And then, before you go in front of the camera, you realize that all of your lines are in Polish…and your don’t speak Polish!  Sounds like an actor’s worst nightmare, right?  Well, that was pretty much the assignment these unfortunate Klingons were given.

And as I was considering this, I began to imagine what Discovery would have been like had they NOT redesigned the Klingons…or the Starfleet uniforms…or made the starships into barely-recognizable whatever-they-were…or had a dark bridge covered with lens flares.  What would Discovery have looked like then?

And then I realized: it would have looked a lot like Axanar…

I freely admit to being an Axanerd, and so it won’t come as any surprise if I say that I enjoyed Axanar more than I did Discovery.  But it goes deeper than that.  For the first time in my life, I am choosing to mentally ignore something the studio is presenting as Star Trek “canon” and consider it instead an alternate-universe.

Prior to this, I accepted the JJ Abrams Star Trek as a kind of “canon” mainly because they told us that the “prime” universe still existed (just without Romulus or Spock anymore), and this weird new stuff was all in an alternate timeline called the Kelvin-verse (or whatever).  I could live with that.

Now, however, CBS is claiming that the Discovery universe is canon.  Not in my head, it isn’t!  I mean, look at this Federation starship from Discovery‘s second episode: 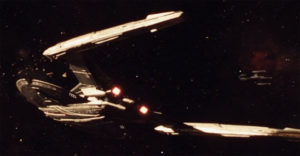 WTF???  This is supposed to be 10 years before Kirk takes command of the Enterprise NCC-1701.  In fact, somewhere out there, Captain Pike is commanding that very same starship!  What the heck is something that looks like a Sovereign-class vessel with Excelsior-class nacelles doing in Starfleet way back in 2256?  Two dozen Federation starships arrive for the battle (at nearly the exact same moment, no less!), and NONE of them looks even remotely like a Constitution-class???  Geez, come on, guys!

Now, if you want to see something that looks like it takes place ten years before Kirk, try this…

And what does a Klingon ship look like just a decade or two before Kirk?  Well, take your pick… 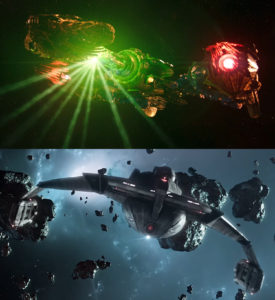 Personally, I can’t imagine the builders of the ship on top designing a D-7 battlecruiser ever, let alone just a few years later.  (Come to think of it, I can’t imagine any ship designer including burning torches to use up oxygen in a completely sealed environment in outer space.   And did the Klingons spontaneously FORGET how to build a cloaking device between the start of the war in 2256 and Star Trek III thirty years later?)

The more I thought about what Discovery looked like—just visually—the less I liked it.  It was physically exhausting for me to watch…and not simply from three-and-a-half-minute-long scenes spoken entirely in Klingon that required me to read subtitles in an ALL CAPS serif typeface (I spent two years in design school, folks…trust me, that was a bad font choice for subtitles).  My eyes also got tired watching many of the other scenes…with all the tilted camera angles and lens flares (what is it with the lens flares???).  Even the “exciting” battle sequences made me shrug.  Does this really look all that exciting?

Beyond that, the other battle shots all seemed to be way too frenetic to the point I could barely tell what was going on…a growing problem I also see elsewhere (I don’t even bother with Transformers movies anymore).

And then I thought about the wonderful space battle scenes designed and rendered by the amazing Tobias Richter for Prelude to Axanar.  They were just as exciting as the space battles in Discovery and yet visually so much easier and less exhausting to watch.  And you always knew exactly what was going on, which ships were firing and which were getting hit…and how bad the damage was.

And then there’s the backstory of the Klingons and their war as depicted in Discovery versus Axanar.  Having now seen the first two episodes of CBS’s new series, I have a much better idea why Axanar Productions was sued.  No, it’s not simply the “quality” or the fact that they crossed the $1 million “threshold” in donotions (although those both played a part in the decision to file a lawsuit)…and it certainly wasn’t the Kharn Roast coffee!

The galaxy isn’t big enough for BOTH wars.

In fact, Discovery comes right out and says the Klingons have barely been heard from for the last 100 years.  That pill would be hard to swallow if they’d just fought a Four Years War only a short decade earlier.

It seems obvious that CBS didn’t want Axanar out there, not because of some silly “competition” but mainly because of the potential confusion for the audience…especially if the production quality was close enough to something a real studio might produce to potentially fool a casual viewer who was not very familiar with Star Trek.

But when all is said and done, I prefer the Klingon war story in  Axanar in nearly every way—at least for right now.  Despite Commander Burnham being a great character and Sonequa Martin-Green an infinitely more talented actor than Alec Peters (sorry, Alec—she has you beat hands down), the whole story behind and around the Battle of Axanar just FEELS more like the Star Trek I know…and want to keep on knowing.

For example, which leads to more story possibilities: a Klingon Empire that has been butting heads with an expanding Federation for decades and seems to be on a collision course to all-out war…or a Klingon Empire that has been all but absent from the quadrant for a 100 years before suddenly, in a single day, getting its shat together after a single speech by one outcast and suddenly declaring all-out war on the Federation?  One backstory provides for decades of dramatic stories leading up to the huge confrontation, as the two sides clash and test each others’ strengths.  The other virtually eliminates all such stories (except maybe how these Klingons that have barely been heard from in a century killed Burnham’s parents 20 years earlier).

Which sounds more like Star Trek: the Vulcans, a pacifistic race, threatening to secede from the Federation in an attempt to force an end to the Four Years War with the Klingons…or the Vulcans, a pacifistic race, firing first at the Klingons, every chance they get, to give them enough of a black eye that the Kligons won’t screw with ’em?  (And hey, knowing the Klingons, would they really RUN from fight after fight with a “worthy adversary” instead of trying to kick their asteroids?  That kind of cowardice and dishonor is barely worthy of a Romulan…at least in the Star Trek I know!) 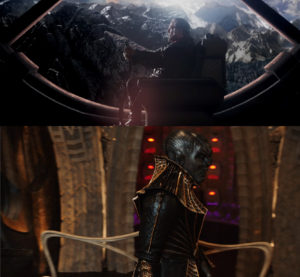 And who makes a more compelling adversary?  On the one hand, we have a proud and noble warrior used to fighting wars on planets, in space, and in front of the Klingon High Council.  He spends years leading campaigns against the humans, watching them pick themselves up off the thin ice to become worthy adversaries who develop ships stronger than what his empire possesses.  Rather than retreat, he presses the High Council to build a more powerful warship to defeat the Federation.  And he sees it through himself, leading the Klingon forces much like Admiral Yamamoto led the Japanese fleet in the Pacific theater during World War II.  This proud Klingon, played masterfully by the late Richard Hatch, was able to deliver his lines with passion, anger, frustration, even regret…a whole range of emotional intensity made possible because he had relatively little prosthetic make-up on his face and was allowed to—wait for it!—deliver his lines in ENGLISH!

On the other hand, we have a Klingon who found a broken ship, somehow repaired it with his outcast friends, went out into Federation space, took a pot-shot at a communications relay, and then sent out the Klingon equivalent of the Bat Signal to get one ship from each house to arrive (at the exact same moment, no less…how small is their empire???).  Once he has an audience of what looks like seven angry holograms, he makes a speech that sounds like Mr. Magoo choking on a chicken bone…and suddenly a war begins.  That must’ve been SOME speech…wish I’d paid more attention to the subtitles!  (Actually, I did.  It still didn’t move me enough to overcome a century of political infighting among 24 grouchy houses.)  Oh, and before this adversary can become a major and compelling character and lead his people throughout the war, he gets killed off.  So much for investing myself emotionally in the “bad guy.”  He dead.

Whether you prefer Axanar or Discovery—or like them both—either way there’s a war between the Federation and the Klingon Empire shortly before Kirk’s time in Star Trek history.  The question is: which war will be your war…in your “head canon”?

For me, it’s Axanar.  Even if the full 30-minute fan film is never made (although I fully expect it to be completed), we’ll always have Prelude.  And that’s my head canon.  I care about those six characters and their war after only 21 minutes of fan film.  And yet, after two 40-minute, studio-produced TV episodes, I feel almost nothing for the characters in Discovery.  (Oh, except for Lr. Saru, whom I occasionally want to toss out an airlock just to see if he could sense that coming.)

Does CBS care what I think of as canon?  Of course not!  It won’t change anything about the new show  They probably don’t even care whether I subscribe or not.  And they’re right not to.  This is a choice I am making for me…not for anyone else.  I’m just sharing it here because, well, it’s my blog.

And hey, even though I’ve chosen to relegate Discovery to a alternate universe in my mind, it doesn’t mean I won’t check out the rest of the Discovery series at some point when I can sign up for a month and binge-watch the remaining 13 episodes.  But when I do, it’ll feel more like I’m viewing some brand new sci-fi series…not Star Trek.  I still have 700 hours of “my” Star Trek to re-watch and cherish.  I’ll always have that.

And it includes Axanar.