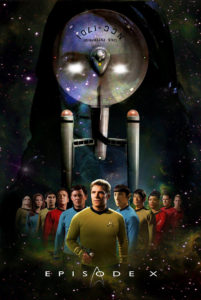 Ten down, just one more to go!

Back in 2013, STAR TREK CONTINUES came in like a lion with a sequel to the TOS episode “Who Mourns for Adonais” that featured Michael Forest reprising his role as Apollo.

Now, as 2017 comes to an end, so does the 5-year mission of the USS Enterprise NCC-1701 as Star Trek Continues goes out with a bang!  Their series finale “To Boldly Go” is making its debut to the public today with the first of two parts.  The conclusion will debut in 11 days at a live screening at L.A. Comic Con, and then the final episode of STC will be released onto the Internet for the general public on November 13.

Both parts were written by noted Canadian sci-fi author ROBERT J. SAWYER (his first-ever work for STC).  He is one of eight authors in history to win all three of the science-fiction field’s highest honors for best novel of the year: the Hugo Award (which he won for Hominids), the Nebula Award (which he won for The Terminal Experiment); and the John W. Campbell Memorial Award (which he won for Mindscan).  Sawyer is a huge Star Trek fan, which you’ll be able to tell almost immediately when you watch the episode.

I don’t want to give away any plot spoilers, so with the exception of gushing about a top-level performance by guest star NICOLA BRYANT (companion “Peri Brown” to the 5th and 6th Doctors on Doctor Who), I’ll simply tell you to note how awesome the music sounds.  A full orchestra made up of more than 40 student musicians from New York’s Empire Film Music Ensemble in Rochester, as well as several professional instrumentalists, recorded the brilliant compositions of Andy Farber.

While Star Trek: Discovery darkly reminds us that it is now 2017, this penultimate episode of STC is a like a warm, comfortable blanket wrapping us up once again in the TV magic of the 1960s (or if you weren’t there in the 60’s, then the 70’s or whenever you first discovered TOS).

Perhaps more than any other episode of STC, “To Boldly Go” will remind you of everything that Star Trek was, is, and can be when there is love and dedication…something the STC team has shared with us fans during the course of their own five-year mission.

And now, please enjoy the first half of this most wonderful gift to Star Trek fandom…