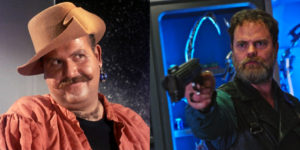 I really enjoyed the seventh episode of STAR TREK: DISCOVERY…

Perhaps the title “Magic to Make the Sanest Man Go Mad” forgives Harry Mudd’s descent into a bloodlust resulting in the repeated serial killing of Captain Lorca and the rest of the Discovery crew while stuck in a repeating time-loop.

Perhaps having that kind of “cosmic undo” power made Harry snap and become someone other than the lovable but conniving scoundrel we’d come to know and laugh at over the past 50 years.  And maybe that insanity was, in fact, only temporary—and ten years later, Mudd will return to just being, as Kirk said, a thief, swindler, con-man, liar, and rogue…and no longer a mass murderer.

As I watched this week’s episode, I actually thought it was a lot of fun.  As countless other fans noted, it was like the movie Groundhog Day, only told through the perspective of the other residents of the quiet hamlet of Punxsutawney, and where Bill Murray is replaced by a malevolent sadist who is out to kill all the townspeople and destroy the town itself.  And of course, the parallels to TNG‘s wonderful fifth season episode “Cause and Effect” are also pretty evident…except that the spatial anomaly is replaced by a homicidal lunatic who is out to murder the crew and obliterate the Enterprise-D.

But really, it was fun watching and re-watching and re-re-watching Lorca get murdered and the Discovery blow up time and again.  I’m not sure what that says about me—or about the writers on the show who came up with a script that included such scenes!—but perhaps because we all knew it was a time-loop and that nobody would die at the end, that makes it all okay, right?

As I thought more about the episode, though, I began to wonder…

It’s not like Star Trek didn’t have its fair share of detestable megalomaniacs and mass murderers over the past 50 years.  Gary Mitchell, Charlie Evens, Dr. Tristan Adams, Lenore Karidian, and of course, Khaaannnnnn…and that’s just from season 1 of TOS.  Sure, Star Trek had villains that you loved to hate, but Harry Mudd was never one of them.  You loved to love him and probably even felt a little bad that he would have to deal with 500 android Stellas yelling at him for the rest of his life.

But that was 1967.  This is 2017.  Things are different.  TV is different (you now have to pay six bucks a month to watch Star Trek!).  And the villains you love to love just won’t make sense in a dark show like Discovery.

The more I thought about this episode, the more things about it began to bother me.  And I can trace most of them back to one thing: bringing comedy to a war-based TV show.

Oh, I realize that war and comedy are hardly mutually exclusive.   Look at movies like Good Morning, Vietnam and Dr. Strangelove, or TV shows like Hogan’s Heroes and of course, M*A*S*H.  Each of those (and many more) managed to combine the two elements successfully and very effectively. 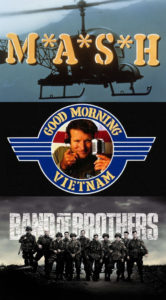 But those films and series I just named all began with their roots planted firmly in the genre of comedy or satire.  They were, at their core, intended to be funny first.  (Heck, M*A*S*H even started out in its earliest seasons with a laugh track).  So when these shows and movies went into dark places, there was a comedic “safety net” that allowed them to either go more deeply into emotional intensity or emerge from it.  In short, these productions could walk in both worlds: comedy and war.

But now imagine the min-series Band of Bothers having a “light and comedic” episode, or the last third of Saving Private Ryan or Platoon suddenly becoming funny…like the last third of Good Morning, Vietnam did in the reverse direction when it shifted from comedy to deadly serious.

(You can argue that Deep Space Nine, a series whose final four seasons were set amidst the backdrop of an interstellar war, had its comedic romps like “Treachery, Faith, and the Great River,” “The Magnificent Ferengi,” and “One Little Ship.”  But remember that DS9 did not begin as a war drama.  It could build on a rich foundation that included comic relief elements like Quark and Nog and even Bashir.  Likewise, TOS had a few of its own comedy episodes, but that series wasn’t starting out dark and intense like Discovery is.)

As I watched Discovery‘s latest episode, I noticed that I wasn’t really laughing.  I wasn’t sure what to think about Harry Mudd’s repeated assassinations of Lorca and the entire crew, and his blasé attitude about it all.  But leaving all of that aside, as I thought about it more, what bothered me the most about the episode was actually the ending.

Oh, sure, it was a hoot finally meeting the infamous Stella.  And having Harry go off with his future wife (and nagging battleaxe) was certainly intended as an “Well, he had it coming!  Good riddance!” moment.

But here’s the problem…

The crew has now let Harry Mudd go free with knowledge of their ship, its secret spore drive, its crew, its inner workings, and countless ways to get on board and quickly take control.  His memory was never wiped, was it?  All they did was tell Stella and her daddy to make sure Mudd stays out of Starfleet’s way.  Yeah, that inspires confidence in me!

What’s to stop this greedy, nefarious scoundrel from sneaking off to contact the Klingons when Stella and daddy aren’t looking and sell this information to Starfleet’s enemies?  Or maybe he just does it for revenge.  Either way, Harry Mudd is now out there, one transmission away from costing the Federation the war!

Just because his father-in-law-to-be is rich?  I guarantee you Starfleet has a card that trumps that.  Is the ship’s brig out of order?  C’mon!  Harry Mudd needs to be kept in custody at least until after the war is over.  And even if he didn’t actually kill anyone in the final time-loop scenario, breaking onto a starship, threatening the crew and trying to take it over, and attempted treason against the United Federation of Planets have got to be criminal acts, right?  This man needs to be put on trial, not handed over to his fiancee and her rich dad! 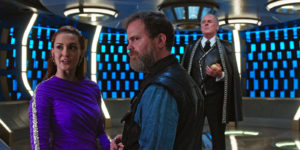 But of course, that’s the problem with suddenly writing Discovery as a comedy.  In order to have a lighthearted and funny ending, they ultimately needed to have an unbelievable one.  And the more I think about it, the less believable it becomes.

It’s a shame, really, because the episode truly was inspired in its fresh takes on the oh-so-familiar sci-fi concept of an infinite time-loop.  But in the end, it just left a bad taste in my mouth, a hangover after a night of drunken merriment when things not making sense didn’t seem to matter.  The day after, they suddenly do matter.

This series is asking me to accept a lot of things—spore drive, petulant Starfleet officers, weird-looking Klignons—and in order to enjoy it, my mind must accept all of these while I view the episodes.  And so I have granted them their reality of “this is what Starfleet looks like in the midst of a devastating war.”  But if they’re going to get that acceptance from me, then they need to stick to their stated reality.  If Starfleet is going to court-martial Burnham and work hard to keep the USS Discovery a secret, then they’ve shown us that there is a criminal justice system in place and a desire to hide the existence of Starfleet’s greatest asset and weapon.

If so, then don’t end the episode by letting Harry Mudd go.