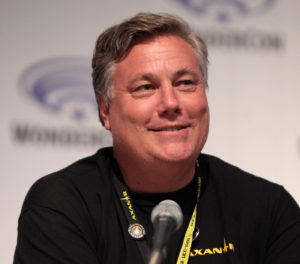 Almost from the very beginning, ROBERT MEYER BURNETT, who directed and co-wrote the film Free Enterprise with William Shatner and Eric McCormack, has been almost as synonymous with the AXANAR project as Alec Peters himself.  He edited Prelude to Axanar and is credited by many as being a major reason that this mockumentary-style fan film came out as well as it did.

For the past three years, Rob has been listed as the director of the upcoming Axanar fan film, originally intended as a 90-minute feature film.  In fact, Rob directed the impressive 3-minute “Vulcan scene” vignette, planned to be a part of that final feature.  After a legal settlement with CBS and Paramount, the Axanar production has now been shortened to two 15-minute mockumentary-style sequels to Prelude.

Rob has been one of the staunchest supporters and cheerleaders for the project (probably even more than me!) and has been involved in pre-production efforts, podcasts, convention appearances, and social media outreach for Axanar over the past two and a half years.  But with the move of Alec Peters and the Axanar sets across the country from Los Angeles to Atlanta, GA, the logistics of a bi-coastal collaboration became more of a challenge.

Yesterday, Rob announced that he was moving on from the production…

Today, I notified ​AXANAR’s executive producer, Alec Peters, that I’ve decided to pursue other opportunities and move on from any future involvement with that project. I have no desire to linger on the past and will not be answering any other questions related to Axanar, Axanar Productions or my relationship with Alec from now on. I do retain the right to release some of the material I worked so hard on at some point in the future. Currently, I’m focused on a number of very exciting projects and opportunities that have opened up for me recently, and look forward to moving ahead with my continued output of great works.

Obviously, I wish Alec and his team the very best and look forward to seeing the fruits of their labor in the future.

In parting, I offer the one scene I directed as a glimpse into what could’ve been…I also produced, edited and co-wrote (along with Bill Hunt), with Visual Effects by the incomparable Tobias Richter and his company, The Light Works. Original Score by Alex Bornstein.

Some detractors have come up with wild theories as to the reason for Rob’s “sudden” departure.  A few of them believe that Rob wanted to get as far away from the Axanar production as he could before it “damaged” his career.

That one actually made me laugh the most.

The time to abandon ship isn’t now when the lawsuit is over and things are going really well.  Had Rob been worried about the optics of being involved with Axanar, then he should have left a year ago during the dark days of the lawsuit when Axanar was getting all the media attention.  Instead, Rob continually spoke out in support of the production and of Alec Peters himself.

It’s also been suggested that Rob was angered about Alec’s controversial posts last week announcing his intention to take legal action against Gabe Koerner (a prolific Axanar detractor) for harassment…and potentially contacting Gabe’s employers at Fox to share with them the things Gabe has done and posted.  (Gabe does digital VFX on The Orville).  Gabe and Rob are friends, and it’s been theorized that Rob was so infuriated by Alec’s posts that he made a knee-jerk decision to walk away from both Alec and Axanar.

I’ve spoken with Rob candidly many times over the past several months, and his potential departure has been in consideration for a while now…long before Alec’s posts last week.  Yes, it’s true that Alec and Rob haven’t seen eye-to-eye everything.  But that’s simply creative differences…not personal conflict or open warfare.  They’re still good friends.

In the end, the fact is that Rob’s been getting some really decent (and paying!) work recently here in Los Angeles…and other opportunities are making 2018 look potentially really good for him career-wise (congrats, Rob!).  And as anyone in the industry can tell you, it’s tough to devote yourself full-time to two different productions simultaneously.  That wouldn’t be fair to the productions, to Rob, to Alec, or to the fans who have been waiting so long to discover what happened at the Battle of Axanar.

So no, there is no new “fan film feud” brewing.  Both Rob and Alec have known this moment was coming for a while.  It’s simply that the announcement didn’t come until yesterday.

This evening, I received and accepted the resignation of Robert Meyer Burnett as the director of the two, upcoming 15-minute segments of The Four Years War mock documentary about the Battle of Axanar.

Although we’re sorry to see Rob move on to other projects, the decision was not entirely surprising given the fact that much of the pre-production work on the two films is being done here in the Atlanta area and Rob still lives and works in Los Angeles.

Rob has also been very busy with some projects of his own over the past year and feels the time is right to focus even more on those opportunities going forward. On behalf of everyone involved in both PRELUDE TO AXANAR and our current production, I’d like to say “thanks” to Rob for his creativity, initiative and hard work to make our projects – from podcasts to finished films – look and sound great. We wish him the very best of luck.

Axanar Productions is currently in discussions with a new director who is very familiar with this project and what we accomplished with our award-winning fan film: PRELUDE TO AXANAR. Once the details of his engagement are finalized, we’ll introduce him to our fans and the greater Star Trek community.

15 thoughts on “ROBERT MEYER BURNETT resigns as director on AXANAR!”