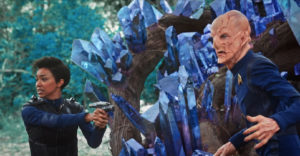 There’s a misconception out there that I never write blogs that have anything nice to say about STAR TREK: DISCOVERY.  To hopefully dispel this silly rumor, I would like to acknowledge publicly that the eighth episode, titled “Si Vis Pacem, Para Bellum” (“If you want peace, prepare for war”) was MARVELOUS!  I enjoyed it thoroughly in ways that I haven’t enjoyed the previous seven episodes.  In short, this episode was true Star Trek.

And it wasn’t just I who thought that.  Many fans, including After Trek host MATT MIRA agreed…

The woman to whom they are referring is episode writer Kirsten Beyer, who has also written nearly a dozen Star Trek: Voyager novels and is working with Pocket Books on the Discovery novels and IDW Publishing on their Star Trek: Discovery comic book series.  In other words, she’s a true, long-time fan…something that I’ve felt has been missing from the writing of the other seven episodes.

To me at least, the Star Trek elements of this series to date have felt more like last-minute add-ons to their scripts rather than an intrinsic part of them…almost like hanging Hallmark Star Trek ornaments onto a tree at Christmas.  Underneath all those decorations, it’s still just a tree without any inherent connection to Star Trek.

Not so with this eighth episode!  It really did feel like Star Trek.

Interestingly, this episode was NOT loaded up with references to canon.  It didn’t need them.  While some other episodes have tended to squeeze canon Easter eggs in like sardines—as if to say, “Look at how Star Trek we are!”—this episode included only a couple: a reference to the Prime Directive and the good ol’ “Needs of the many…” quote from Vulcan philosophy.  But rather than being add-ons to the story, both were essential parts of it.

Really, though, here’s what made this episode feel like it had the  true spirit of Star Trek for me…

I almost hadn’t noticed how much this element has been missing from the series, but do you realize that this is the first time ANY member of the Discovery crew has stepped foot on an actual PLANET so far in the series???

In fact, the last time we saw any Starfleet officer(s) on an alien world, it was in the opening moments of the first episode when Captain Georgiou and Commander Burnham if the USS Shenzhou are on a desert world.  Since then, we’ve Sarek briefly on Vulcan (along with Burnham in a memory flashback), and…what else?  Nothing.  No other planets other than that dilithium mining colony getting blasted from space.  Heck, even the Klingons haven’t left their ships yet…not even to visit Qo’nos!

While the characters on the USS Discovery are interesting and generally well-acted, they haven’t really been AFFECTED by what they’ve encountered so far.  Remember Picard finding the Ressikan flute?  Kira bonding with that Cardassian prisoner in the first season DS9 episode “Duet”?  Worf choosing to kill Duras for the murder of K’Ehleyr?  Kirk’s decision to let Edith Keeler die?  Sure, sometimes these characters were only affected for just one episode, but those moments were deep and emotional…so much so that we viewers felt their impact as well.  That’s good TV, and it’s certainly great Star Trek.

For the most part, that hasn’t really been happening much on Discovery.  With the exception of Burnham, characters are pretty much starting the episodes the same way they finish them (funky mushroom spores notwithstanding).  Even Lorca, after getting captured and tortured by the Klingons, didn’t seem all that affected by it…nor is Lt. Ash “McDreamy” Tyler, for that matter.

But in this latest episode, we finally get a character truly impacted by something he encounters: Saru.  And in having him be so affected by it (and the truth that he reveals because of it), we now know SO much more about his character.  We FEEL so much more for this character.  And in some ways, Saru might never be the same after this.  Or even if he does return to being the “Chicken Little” of Starfleet, he’s now tasted what life is like without anxiety disorder.  Cheers for giving us a true Star Trek story of how the unknown can touch and impact a member of our gallant crew!

For the first time in two months, I couldn’t correctly predict things that would happen later in the episode.  I thought L’Rell’s “faux” interrogation of Cornwell was just a trick to win the Admiral’s trust and then get the info out of her later.  But no, L’Rell really was trying to get away.  I didn’t foresee the inhabitants of the planet Pandora…er, Pavho—or was it the planet itself?—reaching out to the Klingons to try to arrange a group hug.  And I didn’t expect Saru to open up about his lingering resentments to Burnham in the midst of their rumble-in-the-jungle/forest.

The episode wasn’t perfect.  I still find the Klingon scenes with the subtitles pretty onerous and bland.  I’m not really invested in any of the Klingon characters as either villains or potential heroes… although I think some of the Klingon actors are beginning to get the hang of reciting dialogue in another language and wearing 35 pounds of prosthesis and make-up on their heads while speaking through a mouthful of marbles.

But I have to say that I didn’t really follow the action on the Klingon ship—why L’Rell was so quick to try to help Cornwell or why Cornwell was so quick to agree…or for that matter, what finally happened when L’Rell shot Cornwell.  Obviously, we’re not supposed to know yet whether or not the Admiral is dead, but the whole sequence of scenes just felt rushed and a little bit sloppy.

Oh, and speaking of the subtitles, I really, REALLY need to finally show you all something!

For the Klingon subtitles, the  producers decided to use a styled serif typeface (“serif” means there are little “feet” on each letter) in ALL CAPS with a larger-sized capital letter at the beginning of each sentence.  It looks like this…

I get it.  They wanted to do something “exotic,” something that didn’t look like every other subtitle out there.

Here’s the problem, though: there’s a reason why all those other subtitles look alike…BECAUSE IT’S READABLE!!!

I have a graphic design degree from Pratt Manhattan, and I studied typography extensively.  So trust what I am about to tell you (as Rose Wasserman spent ten months drilling this into the brains of her students)…

ALL CAPS is not meant for long lines of text or full sentences.  It’s meant for headlines…preferably short headlines.

Also, serif fonts don’t read well against intricate backgrounds.  They work best against flat backgrounds like a white page or a black website.  This is because each letter has both thick and thin lines, so the letters themselves are visually complex to the eye.  This tends to “camouflage” the letters somewhat and tire out the reader.

And finally, the letters are pretty thin and don’t have much of a drop shadow.  If you look at the screen cap above, there are places where the white letters over the white textured backgrounds are pretty difficult to read.

After a three minute scene filled with a constant stream of subtitles in this type style, a viewer can literally become exhausted (I know I do!). 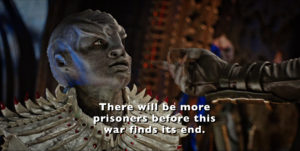 If anyone is curious, that font is Gill Sans Bold.  It’s the same size as what the producers used, but it’s not in ALL CAPS, has thicker letters, and a slightly deeper drop shadow.  And it makes a HUGE difference.

In addition to being easier and less exhausting read, it also gives more “weight” to the Klingons’ words, subtly implying strength and power in the way the current Discovery subtitle font does not.

The point is that this latest episode of Discovery was, to a large extent, the “Star Trek” many of us disgruntled fans have been waiting for.  And I agree with After Trek host Matt Mira: let’s bring Kirsten Beyer back to write more episodes!

I wonder if Matt realized the implication of what he had said.  If you think about it, according to Matt, the other episodes thus far were not as “Star Trekian” as this one.  In other words, he’s seen the series falling short of being true Star Trek the same way many other fans have…so much so that he’d like this writer back.  So would I.

In fact, I think the show needs MORE established Star Trek writers—and there are many out there—who better understand what makes Star Trek actually be Star Trek…rather than writers who think you can simply throw a Tribble or Gorn skeleton into a scene or include Harry Mudd in a story line and—POOF!—you have Star Trek.

Maybe the producers will realize this in season two and bring in more writers who have been hard-core Trek fans all along.  And if they do, then maybe I won’t complain as much.

We can but hope…

15 thoughts on “FINALLY…DISCOVERY does a STAR TREK episode! (editorial review)”