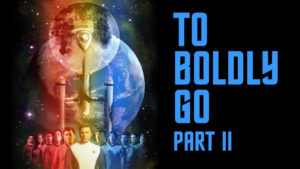 Now listen to me very carefully:

There’s no need to say anything more, unless you missed “To Boldly Go, Part I” (in which case, watch that first and then follow my previous orders).

Comments with spoilers are welcome below, but if you haven’t watched the episode yet, for heaven’s sake, DON’T SCROLL DOWN THIS PAGE!!!  Just…don’t.  Watch the finale first.  It’s 58 minutes and 10 seconds of absolute Star Trek bliss.

Also, don’t miss the final two installments of my “History of Star Trek Continues“ blog series this Friday and next.  Out of respect for those who don’t follow orders, I will be waiting until next Friday to get into any details about the finale.  I will also be including video segments from the STC panel discussion after the live screening).

Speaking of which, here is a SPECIAL INTRODUCTION by show-runner VIC MIGNOGNA that was given in Los Angeles before the screening…

And now, after fifty years, it’s time to finally witness the end of that historic five-year mission and celebrate this groundbreaking fan series…a precious gift to all of Star Trek fandom.  Ladies and gentlemen, this is why I’m here…