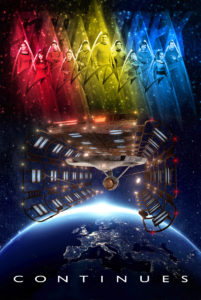 Now that all 11 episodes of STAR TREK CONTINUES have been completed and released, the question rings out: Will there be DVD’s available for sale?

Some Trek fans like having DVDs of their favorite fan films, and some productions have obliged.  However, with the guidelines now forbidding the sale or distribution of fan films on DVDs or Blu-rays, most fan producers are opting not to release their episodes on disc except in the rare circumstance where they are given directly only to people who worked on their productions.

However, Star Trek Continues hasn’t exactly been following all of those guidelines.  So the question of whether they will continue that philosophy and release DVDs anyway is certainly a fair one to ask.

And now STC has answered.  In an e-mail sent out Saturday, executive producer VIC MIGNOGNA said the following:

Thousands of you have been asking for years if our series would ever be available on DVD & Blu-ray. Because there is significant cost in having discs and artwork pressed & packaged, it’s not feasible for us to make physical discs since we cannot sell them. That’s the bad news….

Now for the good news.  From the cast & crew of STC, our Christmas present to all of you is this: ISO image files (files in the .iso format) of all four volumes (and all 11 episodes) of our series are now available for free download on our website at so you can burn your own DVDs & Blu-ray discs:

You can also download the artwork inserts & disc art for all four volumes for free as well!

But that’s not all! We have made available the full-sized 24”x36” posters of all 11 episodes for free, including a custom STC poster I created which is displayed in this newsletter. [See the image at the top of this blog -Jonathan] All of our final shooting scripts can be downloaded as well.

But that’s not all! Many of you have asked about the original music that has been composed & produced for STC. We are releasing all of that music for free download, as well as the artwork and disc art for “The Music Of Star Trek Continues.”