I actually liked the tenth episode of STAR TREK: DISCOVERY…until I hated it.

Well, “hate” is a strong word.  So instead, I’m just gonna go with “totally pissed me off!”

So what was the straw that stuck in my craw?

Was it the underwhelming “surprise” that Ash Tyler is really the Klingon Voq and that there never was any “rape”?  Nah.  I knew he was Voq all along.  Being predictable doesn’t piss me off.

Was it that Ash/Voq killed Dr. Culber…arguably the only character on the ship I was starting to actually like?  No.  That stung, but as I said in a previous blog, I’m not really emotionally invested in any of the characters.  So I got over Culber pretty quickly.

Was it that I still have to wait to say “I told you so!” when we finally learn that Captain Lorca was/is originally from the Mirror Universe?  Not really.  I can wait another week or two for that “surprise” reveal.

Was it the cringe-worthy scene of Tilly’s first attempt at being “Captain Killy”?  No.  I pretty much expected something like that to happen—the inevitable “fish out of water” scene to establish that our civilized folks are gonna find it tough to pretend to be barbarians.  And it wasn’t too bad.  It was even kinda fun and cutesy. 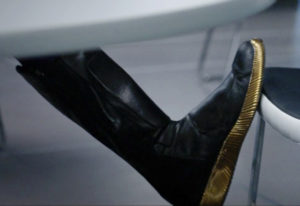 Was it the Mirror Universe uniforms that somehow managed to be even more outrageous than the Starfleet uniforms?  No, I pretty much ignored the glitzy half-vests…right after singing Let’s Do The Time Warp Again when I first saw the Discovery crew wearing them.  Actually, I was more horrified to discover that the Elvis-like Starfleet uniforms on this show include golden soles on the boots!  Who designed their footwear…Usain Bolt???

Was it the lack of banter?  No.  This episode actually had some decent banter for a change.  (When I see/hear banter in an episode, my friends, I freely admit it.)

But not just any stupidity…it has to be stupidity that makes me say, “I just can’t believe that!”  I mean, for Star Trek, I believe in faster-than-light space travel, transporters, food replicators, and even an energy barrier at the edge of our galaxy that turns ESPers into gods.  But it’s the unbelievably stupid where I draw the line!

And while those moments didn’t ruin the entire movies for me (well, Trek V was pretty much ruined by the time Uhura was doing her seductive fan dance and Kirk was telling Spock to “be one with the horse”), those scenes still pissed me off at how unbelievably stupid and stupidly unbelievable they were.

Yeah, I realize that, had the USS Grissom picked up Spock’s body or Admiral Grandpa sent the Enterprise AND another starship (with a working transporter) to Nimbus III, that those movies would have been over in 18 minutes each.  But still, stupid is as stupid does.  And writing where the plot depends on something stupidly unbelievable happening just bothers the bejeebus out of me!

So what was so unbelievably stupid about Discovery‘s latest episode “Despite Yourself”?  Two things, actually…

Ash Tyler snaps the neck of Dr. Culber.  Fine.  But remember that Lorca ordered another doctor to handle Stamets.  I realize that other doctor wasn’t there at the moment when Culber croaked, but by the time Burnham had been on the ISS Shenzhou for a few hours trying to find some time to grab the data on the Defiant while getting constantly interrupted, Dr. Whoever or one of his nurses should have come into sickbay to check on Stamets and found a dead Culber splayed across the floor.

At this point, the following things would happen:

Now, this sequence of events still might happen next episode (although I somehow doubt it, based on the previews), but still, Burnham has already been on the Shenzhou long enough (gotta be HOURS!) to feel burnt out (get it?), and now she’s gonna get down and get funky with McScruffy the Security Hottie.  The longer it takes for someone—anyone—on the Discovery to, um, discover that Culber is dead, the less believable this all becomes.

And don’t say that Shenzhou was simply out of communication range.  Lorca ordered Saru to stay within transporter range, and unless Scotty somehow invented transwarp beaming in THIS universe, too, then transporter range also means comm range.

And speaking of the horizontally-bopping Michash (man, that couple doesn’t ‘ship well!)…WTF???  I mean, literally!  They’ve got time to do the nasty???  I thought they were on a mission!!  I mean, Kirk never…oh, bad example.  But that was the 1960s!

Seriously, though, I don’t care how hard a day “Captain” Burnham had in her ready room.  This is no time for foreplay and a quickie…and especially not a longie!  Lorca’s in the brig.  (And yeah, I was thinking that the last scene would show him in the agony booth…and it did…so predictable again!  And hey, who didn’t see the assassination attempt in the turbolift coming as soon as Burnham asked to be escorted by the ambitious Number One who was now feeling like number two?)  The longer Lorca is in the brig, the more danger he’s in.  Burnham’s not dumb; she knows this!

Oh, and the longer it takes the Discovery to get back to our universe to share the secret of detecting the Klingon cloak (which they never bothered to transmit back to Starfleet before jumping???), the more of their fellow officers will likely be blasted to atoms by the aforementioned newly cloaked Klingon ships!  So hurry the hell up!!!

Sorry for all the exclamation points, folks.  No I’m not!  I’m pissed!!!

I mean, I’m all for Burnham getting laid.  She’s been beyond tense for the last eight episodes!  But seriously, people, let’s stay focused on mission here!  Assuming Burnham doesn’t have computer access from her quarters (seriously???), isn’t there SOMEplace on the ship where she can sit at a terminal in peace?  Can’t the Discovery‘s chief of security, I don’t know, secure Burnham in a computer alcove before he, um, secures her in her quarters?  (Man, I’m running out of euphemisms for sex!!!)

Anyway I totally lost it when I saw this…

Stupid writing.  Stupid, stupid, stupid.  Obviously, they have to give Burnham her piece of Ash before the big “surprise” reveal that he’s really Voq.  But they’ve written themselves into this corner.  They’ve only got five more episodes total and a lot still to do.  I suppose that’s the challenge and the risk of serialized writing…having to include certain scenes before other scenes happen and figuring out where to, um, stick ’em in.  But if you want to play in the big leagues, then get the right players on your team.

Having Burnham come back to her quarters with a “It was a really hard day at the office, honey…” look of exhaustion was ridiculous.  This was a human child raised by Vulcans, dammit!  WHAT WOULD SAREK SAY???  Actually, he’d say, “Put your big girl panties (back) on, and figure out a way to get to a computer…NOW!”

Up until that last scene, I was mostly okay with the episode.  But after the fade-to-black, I just stormed right to my computer and started to blog.  I actually don’t believe in blogging while angry…and perhaps I’ll feel differently in the morning.