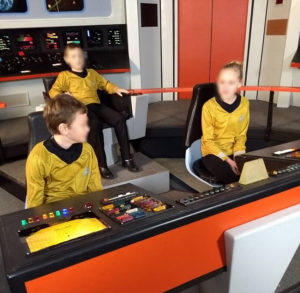 There’s a lot going on behind the scenes at STARBASE STUDIOS recently, and I’ll get to that in a moment.  But first, you might want to read up on the current situation if you don’t already know about the lawsuit and all of the other drama going on of late.

All right, strap in.  Let’s start with this past weekend when a group of 5th and 6th graders from Parkview Elementary School Music Club got a chance to film a music video project on the amazing TOS sets of Starbase Studios, currently located in Marble Falls, Arkansas.

The field trip was set up by their teacher, KEVIN CROXTON, who had composed the music for THE FEDERATION FILES’ second episode Walking Bear, Running Wolf last summer.  In exchange, Kevin had asked show-runner GLEN L. WOLFE for the opportunity to bring Kevin’s music students (they’re local) to the sets to film a video project.  So this past weekend’s excursion has been planned for nearly 7 months.

And, really, isn’t this what Starbase Studios is all about?  Sets by the fans, for the fans…and even attracting a whole new (next!) generation of young fans.  So what could possibly be wrong with that?

Apparently, there was an assumption made by SCOTT JOHNSON and KENT “WORDS” EDWARDS that the Starbase Studios sets were officially “closed” to filming last September after Glen Wolfe removed items from the building where everything was housed, making much of the Starbase sets unusable for filming.

So Scott and Kent were shocked and furious to find out that Glen Wolfe was on the sets during this past weekend’s shoot.  (Glen appeared a photo posted to The Federation Files‘ Facebook page.)

Scott and Kent felt strongly that they should have at least been consulted about this visit, as they firmly believe that the sets belong to them, and that Glen was barred from using them.  This has resulted in Scott and Kent announcing that “it looks like no deal will be reached” to avoid going to court.  And as usual, the fan community is rapidly taking sides and going ballistic.

Ladies and gentlemen, please remain calm and stay in your seats.

In the lawsuit, Glen contests Scott and Kent’s claim of ownership and contends that nearly all of the current Starbase Studios sets are his personal property.  Now, speaking only as an impartial observer, I think Glen has the weaker claim, but I’m not a lawyer or a judge.  The only point that I want to make here is that the ownership status of the TOS sets has NOT yet been legally resolved.  I repeat: NOT  legally resolved!

I say this because the misinformation is already starting to spread through the fan community (doesn’t it always?), and I want to nip any false assumptions in the bud asap.  One example is JUSTIN BURTON, who inaccurately reported on the All Things TREK Facebook Group:

While this was awaiting trial in small claims court a agreement was reached for there to be NO USE OF the studio by any party until the situation was resolved. This was signed off of by the Judge and this is now most likely a contempt of court case which could mean more legal trouble for Glen and Dan and who ever let them in to the studio.

Nope.  Not even close to being close.

According to Glen, no such understanding was ever agreed to by him, and certainly there was NO judge’s sign-off…ever.  I’ve seen all of the legal filings, as has VANCE MAJOR (creator of the MINARD saga of fan films and who, I’ll explain shortly, is very involved in all of this), and neither of us ever saw anything from any court preventing Glen Wolfe from using or being on the sets…no agreement, no injunction.  Scott and Kent claim full ownership, of course, but as I said, that ownership is still legally in dispute.  So no, there’s nothing that would have officially prevented Glen Wolfe from using those sets for filming (or to help his friend film there).

One interesting wrinkle to all of this (that’s left some fans scratching their heads) is that the sets are currently housed in a building owned by CHARLES “BUD” PELSOR…and Charles is one of the people being sued by Glen.  So why would Charles even let Glen inside the building in the first place?  Well, according to Glen, the two of them actually have an amicable relationship, and even if Glen wins the lawsuit, he has no intention of pressing to collect damages from Charles.  Charles was only added to the lawsuit at the recommendation of Glen’s lawyer.

Anyway, long story short for anyone thinking that Glen and his teacher friend and a bunch of adorable 11 and 12-year-olds broke into the building to film: no, they were happily let in by the building’s owner.

HOW I SPENT MY WINTER VACATION – TRYING TO SETTLE THIS MESS!

Assuming that a settlement agreement is ultimately signed and Starbase Studios continues to operate for fan filmmakers to use, our entire fan film community owes an incredible debt to Vance Major!  I just need to say that up front.

While Scott/Kent and Glen were seething, griping, fuming, and generally not communicating with each other, Vance was Switzerland and provided a conduit of communication because he was good friends with all three of them.  Despite Vance’s own frustrations with Glen’s decision to remove items from the sets without the knowledge or permission of the others, Vance understood why Glen made that decision.  (He didn’t agree wait the decision, but he understood  Glen’s reasons.)  And Vance continued for many weeks to work exhaustively with Scott, Kent, and Glen…trying desperately to negotiate some kind of settlement.

Vance didn’t have any selfish reason for doing this.  He’s pretty much done with Trek fan films and doesn’t intend to use the Starbase sets ever again.  He doesn’t even want any credit.  I’d written up a blog cheering his efforts, and Vance asked me not to publish it.  Vance was simply doing this because, as the old Vulcan proverb says, “Only Nixon could go to China.”  While other fan film people were grumbling, “Why don’t they just talk to each other and work this all out…?” Vance was the only one who could and was willing to step forward, listen to both sides, and try to carve out a settlement that was fair and acceptable to both sides.

Why was it so hard?  Well, first of all, there was (and still is) a lot of anger and resentment on both sides.  And second, everyone does have valid concerns and grievances, for instance…

What Vance ultimately came up with was a compromise that sounded reasonable to me:

There were some other minor details, but that was essentially it.  And there were some false starts.  At one point, Glen’s lawyer advised him not to sign the deal as submitted by Vance.  So Glen’s lawyer wrote up an agreement with more legally accurate wording.  Now it was Scott’s turn not to want to sign, as point #3 above had been cleverly reworded with a loophole, which Scott’s legal advisor caught.  And when I looked it over myself, yeah, there was that loophole, although I don’t think Glen was aware of it.  I suspect it was just his lawyer trying to be protect his client.  Unfortunately, that little bit of “protection” nearly killed this whole deal.

That’s when I entered the story.

I wasn’t planning on ever discussing my own involvement with negotiations here on Fan Film Factor.  But Scott “outed” me yesterday on the Starbase Studios Facebook page, so yeah, folks, the cat’s out of the bag.  I did help both sides come up with a revised settlement.  Here’s what happened….

“Let me try one last Hail Mary pass,” I told Vance.  Yeah, folks, I live in a world of hope.

I contacted Scott and said (in my best Mr. Morden impersonation from Babylon 5): “What do you want?”  Obviously, Scott wanted Glen to drop the lawsuit, which of course, was part of the agreement that no one seemed willing to sign.  But what was it specifically in Glen’s agreement that didn’t work for Scott?  Obviously, the loophole.  But I could easily fix that by tweaking part of a sentence…and Glen was okay with it.  So what else?  I didn’t want to make that one tweak and then have Scott still refuse to sign.  “What do you want?” I asked again.

“Anything else…aside from fixing the loophole?”

“Let’s find out,” I replied.  I messaged Vance: “Before you walk away from this completely, Vance, can you call Glen and ask if he’d accept a 50/50 ownership of the sets shared with Scott?”

Come back tomorrow to discover what Glen said and what happened next.  And I’ll also explain why I believe the only logical move now for everyone involved is to sign a compromise settlement agreement…and why I also believe that whoever refuses to do so will be known as the person(s) who ended Starbase Studios.

45 thoughts on “Elementary school kids have a blast filming at STARBASE STUDIOS…and all hell breaks loose in fandom! (part 1)”