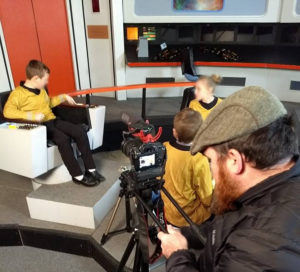 Read Part 1 of this blog entry if you haven’t already.  Did you do it?  Good.

So it was now a few weeks before Christmas, and VANCE MAJOR was ready to tag out and I was ready to tag in to try to get this compromise settlement for STARBASE STUDIOS to the finish line.  Vance was exhausted, but he got the runners 90% of the way there.  Just a few teensy details left to work out…or so I thought.

Keep in mind, neither Vance nor I is a lawyer.  Instead, we were just trying, as friends, to help SCOTT JOHNSON and KENT EDWARDS work out a way where GLEN L. WOLFE would drop his lawsuit against them, and Starbase Studios could continue without fan filmmakers having to pay hundreds or even thousands of dollars to use the Starbase Studios TOS sets.

By the time I tagged in, there was a full legal settlement agreement already written up by Glen’s lawyer, ready for Scott and Kent to sign.  But they still had some issues with it.  One of the biggest was that Scott decided that he didn’t want Glen to own 100% of the Starbase sets.  But he was willing to split them 50/50.  Would Glen agree?  Scott didn’t think so.  And frankly, neither did Vance.

Vance agreed to make the call.  Five minutes later, I had Glen’s answer…

Glen would be willing to accept a 50/50 split of ownership.  YAY!  That was easy enough for me to tweak in the contract.  Glen told Vance, “Look, just have them make their changes, and I’ll sign.”  So I didn’t need to do any real lawyering (I’m a blogger not a lawyer, dammit!).  All I was really doing was was playing “copy editor.”

The agreement Glen’s lawyer submitted stated that Scott and Kent would sell their ownership to Glen for $10, and if Glen ever wanted to sell the sets in the future, he had to first offer them back to Scott and Kent for that same price of $10.  But now instead of full ownership for Glen, it had to be 50/50.  Okay, that was easy to fix.  Y’see, Kent wanted out completely, no more ownership of any of the sets.  He’d continue to be a principle of Starbase Studios, LLC, but that’s just a production company.  The sets are completely separate.

So just have Kent sell his 50% ownership to Glen.  Simple!  We arrive at Scott and Glen each owning 50%, and Kent owning nothing…as requested.  As for that sellback/buyback thing, if ever Glen or Scott wanted to sell, they simply had to offer their 50% stake to the other owner first.  Okay, done!

I exported a PDF with all the edits in red, sent it to everyone involved, and they all seemed to be okay.  Scott and Kent even signed and notarized their copies.  Great!!!  I’d just helped Vance Major save Starbase Studios!  What a wonderful blog to write to kick off the New Year!!

(You just know something’s about to go wrong, dontcha?)

Okay, potentially easy fix for Item 1: just don’t have Kent “sell” anything.  The agreement would simply state that, once signed, Scott would have 50%, Glen would have 50%, and Kent would have zero.  And if Kent really wanted that ten bucks, I’d drop a Hamilton into an envelope and mail it to him myself!

Item #2, however, made my heart sink.  Scott doesn’t have a lot of money.  How much exactly did Glen want Scott to chip in?  Half of the expenses would be potentially $2,000/year.  Scott doesn’t have that!  Also, it’s not really fair for Scott, who lives four hours drive away in Oklahoma City, to pay the same as Glen, who will be living close-by in Arkansas.

Fortunately, Glen didn’t want to suck Scott dry.  He just wanted a token amount that would assure him that Scott had at least have some “skin in the game.”  Maybe $50/month?  Okay, I crossed my fingers and took that proposal back to Scott.

On a three-way call with Scott and Vance (no, Vance never tagged out…exhausted though he was!), Scott said there was no way he could afford $600/year.  But Vance suggested he could rally the other fan filmmakers who used Starbase Studios to help.  Ten of them each giving $50/year would decrease Scott’s responsibility to about $10/month.  Yeah, Scott could do that.

I went back to Glen—beginning to feel like a ping pong ball!  I told him the situation, and Glen didn’t want to force the other fan filmmakers into such a messy and hassle-filled arrangement.  He just wanted Scott to pay something…even if it was just $10/month.  Glen was actually very fair and reasonable—at least with me—every time we spoke.  (Like Vance, I have no horse in this race so I don’t play favorites.  I just want these sets made whole so fans can start using them again and I can write more blogs!)

Now Kent had a problem!  It wasn’t that he wanted the $10; it was just that he wanted it acknowledged that he was, in fact, a partial owner of the sets before he becomes a non-owner.  So he still wanted Glen to buy him out.

All right…got it!  Kent sells his ownership stake to Glen, but the contract doesn’t say how much that stake is…only that Kent winds up with nothing and Glen and Scott each wind up with 50%.  Purposefully vague, but it solves the problem.

My God, that felt like applying to college!  To six colleges!!!  Okay, I had all the notes…time to make the final edits.  I sent the re-re-revised document to everyone involved.  Glen just needed to show it to his lawyer, sign it, notarize it, send copies to Scott and Kent for them to sign and notarize, and our long fan film nightmare would finally be over.

Time to finally write up the first draft of the “Starbase Studios Crisis Resolved!” blog entry, right?  Actually, no…

This past weekend’s video shoot with the elementary school kids happened, Glen was present, Scott and Kent both had a cow, and suddenly Scott was posting on the Starbase Studios Facebook page:

…it looks like no deal will be reached and now more time has been wasted.
It looks like court is on the horizon.
It seems to be the ONLY option left.

…WHY SIGNING AND SETTLING IS THE ONLY LOGICAL OPTION!

All right, everyone, if this goes to court…

Lawsuits typically cost at least $20,000/month to litigate.  Glen told me on Sunday night that his lawyer has estimated about $10,000 to do everything up until the trial starts.  Then he has to pay for the trial itself!  Likewise, Scott and Kent will also have to find an attorney (they haven’t yet).  It’s not a pro-bono kind of case, so Scott and Kent are looking at putting $10,000 up immediately just to get their lawyer up to speed before the case goes to trial in a few weeks…plus another $20,000 if they’re lucky enough that things don’t stretch out more than a few weeks.

If Scott and Kent don’t get a lawyer, they lose by default.  You can’t just ignore a lawsuit and not show up in court.  The would result in an automatic summary judgement by the judge against the defendants.  And according to the Legal Summons, Glen isn’t just suing for full ownership of nearly all of the sets; he’s also suing for nearly $29,000 in damages for illegally detaining the sets.  So not getting a lawyer means Scott and Kent are potentially out the same amount as getting a lawyer AND they lose the sets forever!

Even if they get a lawyer, this is still the Kobayshi Maru for Scott and Kent.  If they lose, Glen gets the sets free and clear…potentially with monetary damages, as well.

If they win, they still lose.  Why?  Charles Pelsor wants his building back…especially after all this drama over the sets.  So unless Scott and Kent can find free rent in perpetuity somewhere else, those sets are out on the sidewalk getting rained on by late February.

I’ve spoken with Glen.  If he loses, he’ll just rebuild the sets anyway, but Starbase Studios won’t be permitted to use them.  If Glen wins, he isn’t planning on letting Starbase Studios use them anymore either.

But he is willing to agree to it now.  Why?  Because Glen doesn’t want to go to court.  He’d rather spend those tens of thousands of dollars fixing up the existing sets and building new sets.  So there’s a very attractive compromise settlement agreement for both parties that essentially says, “Let’s just move forward and get back to making fan films.”  But if Scott and Kent refuse to sign it, why should Glen continue to deal with them at all?

So in my opinion, this is a no-brainer situation for Starbase Studios…a let me state this clearly and in ALL CAPS:

IF YOU LOVE TREK FAN FILMS, YOU WANT ALL THREE OF THEM TO SIGN THIS SETTLEMENT AGREEMENT!!!

If they don’t sign, Starbase Studios ends—regardless of the verdict in court—unless there’s another Glen Wolfe somewhere out there with big bucks, offering free rent, and not expecting anything in return.  (And if there is, tell him about the Star Trek Continues sets in Georgia, too!)  But frankly, folks, I doubt Scott and Kent are likely to find another rich Trekkie from the central U.S. before the first rains come.

If they do sign, then the sets are moved into a modern building with dedicated electrical to light up the entire bridge, flushing toilets (something the sets never had back in Oklahoma City), and space to expand a little to add other set pieces.  Oh, and Starbase Studios (and any fan filmmaker going through them) still gets full access to the sets for FREE (or the cost of electrical)…same as it ever was!

Seriously, is there anything NOT good about that scenario?  I think not!

I am told by Glen Wolfe that he intends to sign the settlement agreement this week (assuming his lawyer is okay with my latest proposed version), notarize it, and send it certified mail to both Scott and Kent.  Then the ball’s in their court.  And I do mean “court.”  If they refuse to sign because Glen hosted a bunch of 5th and 6th graders at the sets without getting permission first, well, someone’s gonna be writing a very angry and frustrated blog!

But as I’ve said many times in many places, I believe in all of these folks.  Signing the agreement saves Starbase Studios.  Going to court almost certainly ends it.  I have faith that everyone will make the logical decision.

42 thoughts on “Elementary school kids have a blast filming at STARBASE STUDIOS…and all hell breaks loose in fandom! (part 2)”