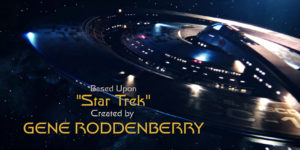 Ever since William Shatner first said the words, “Space, the final frontier…” every Star Trek series has had an opening title sequence featuring, well, space!  All but one, that is…

STAR TREK: DISCOVERY broke with tradition to give fans an odd montage of seemingly random images—a drafting sketch of the USS Discovery, the Victoria Crater of Mars, a human nose/mouth/neck, a close-up on a human eye, an EVA-suit, a phaser, a communicator, a Vulcan salute, a Klingon blade, a weird giant plant spitting out the Discovery, a grappling hook, two space-gloved hands reminiscent of the iconic “The Creation of Adam” biblical fresco by Michelangelo, and finally the logo for the series and a fly-by of the USS Discovery again.

But no space (the final frontier).

The music is an eerie-sounding composition that transitions into a sometimes driving, sometimes mournful orchestral piece culminating in the familiar opening melody of the original Alexander Courage Star Trek theme.  Composed by Jeff Russo, the Discovery music combines with the visuals to create an intensely surreal impression similar to the opening title sequence of the series Westworld.

For those who haven’t watched Discovery yet, here’s the opening title sequence that begins each episode…

Like the series itself, people seem to either love or hate the opening title sequence for Star Trek: Discovery…just as they did for the “Faith of the Heart” opening for Star Trek: Enterprise.

But Enterprise was canceled before YouTube existed (or rather, just as it was being launched).  Now, however, fans feel quite comfortable making and posting their own new versions of the opening title sequence, and there are currently dozens of videos out there!

After reviewing all the ones I could find, I selected my TOP TWELVE.  Yeah, I know it’s supposed to be TOP TEN, but I just couldn’t eliminate the final two.  They were just so good!

I’ve assembled those twelve fan-made videos here in one blog—ranked in order so that my favorite is last.  Which one is YOUR favorite?

Byron Man used VFX footage from the first nine episodes of Discovery to create a very nice opening montage.  He included the names of more members of the cast and left out completely the parade of 147 producers, consulting producers, executive producers, co-executive producers, and janitorial staff that clutter up the existing opening credit sequence.

Speaking of all of the producers listed in the opening credits, DrewVan Media felt that it might be less cluttered to just group all of those folks into just three of mega-listings and give more time to to the cast.  And if you’re wondering if such a thing would ever happen in Hollywood today, the answer is: what planet do you live on???

Have you ever used the “invert” filter on a photo or video?  Usually, it creates a weird “negative” image where black is white, red is blue, and everything looks like the two Lazarus’s are fighting each other in the chamber between the matter and anti-matter universes in “The Alternative Factor.”  But the week after Discovery premiered last September, Chaosnaut decided to try the filter on the opening title sequence, and it actually looks pretty decent!  In fact, inverting the colors actually makes the sequence seem more like it takes place in space…

When Luke Wade watched the first episode of Star Trek: Discovery, he enjoyed the episode but was left rather unimpressed with the theme song.  So he “whipped up” his own theme song over a couple of nights.  Not being able to compose music myself, I’m in awe of people who can do it so quickly and easily.  I’m not sure if this music fits the relentless fast pace of the series, but perhaps if the theme song had been a little more light and upbeat like Luke’s version, the series might have followed suit.  (Actually, this music gives me an almost grand western motion picture feel…and maybe this is what Wagon Train to the Stars might have sounded like!)

Like the first alternative sequence (#12), Space Dave took some of the best VFX shots from the first nine episodes and put together a stunning montage over the Jeff Russo music.  The reason Space Dave gets to sit four slots higher is because he added some Discovery sound effects to the music toward the end, and it’s a cool effect (like the USS Enterprise-D or Voyager warping away at the end of their opening title sequences).

Here’s another fan who decided to take the Discovery opening title sequence and spice it up with different music.  This time, the fan was DBF68YT, and he didn’t compose the music himself.  Instead, a song called “First Flight” from Position Music‘s MAGICAL FANTASY VOL. 2 release grabbed his attention.  “This is a little Star Treky,” he thought, “but I’m not entirely sure since it’s a bit fast.”  So he downloaded the music and played around with it in a sound editing program, slowing it down in places, trimming out certain parts, etc.  What emerged is a really compelling opening title sequence that I like quite a bit more than what CBS decided to go with…

ZEFilms Productions did something really fun.  He used the Star Trek Online Multi-Player Online Game to generate a series of animations of the USS Discovery.  Then, using music from HypeSounds, he created an opening title sequence in the best traditions of Star Trek.  From TOS to TNG to DS9 to Voyager, the series openings have always spotlighted the central starship (or deep space station) in multiple “glamour” shots.  This sequence harkens us back to those good old days…

Dr. Zaius, in addition to being a talking orangutan and leading member of the Ape National Assembly, Minister of Science and also Chief Defender of the Faith, is apparently a Star Trek fan with a penchant for editing together montage sequences.  This version takes VFX footage from the entire 15-episode first season of Discovery and combines it with the music from Star Trek: The Next Generation.  And it’s not just the familiar Jerry Goldsmith theme that was used in the TNG series, but he also added the less familiar alternate theme that was composed by Dennis McCarthy and never used.  The result is quite elegant and adds a really nice touch of showing each of the characters when the actors’ names are listed.  No Trek series has ever done that before, but personally, I kinda like it!

This is the final (and highest ranked) of the sequences that use the original version and simply change the music.  In this case, Kris Taylor made a very interesting choice.  In the third Netflix trailer for Discovery, they used Jetta’s modern cover of the 1971 rock classic “I’d Love To Change The World” by Ten Years After (here’s a link to the original).  Kris decided to see how the haunting melody works under the Discovery title sequence.  And frankly, I think it’s incredible!

This next version begins with the same slow-tempo melody as the current Discovery theme.  But then it jumps (and I do mean jumps!) into the tense, hard-driving music used for the title sequence for the two-part “In A Mirror, Darkly” episodes of Star Trek: Enterprise.  It turns out that music works even better for the fast-cut VFX from the first nine episodes of Discovery!  Too bad CNCcamon1 didn’t have any footage from the four mirror universe episodes of Discovery when he edited this sequence, but even so, it’s pretty awesome to watch and really drives home the breakneck pace of most of season one.  There’s even a cool mirror universe logo at the end…nicely done!

This next one almost got the #1 spot (it was a really tough choice!).       aRcTiCADOptEd used free music from the YouTube Audio Library (a trailer theme called “Pucker Up” by Jingle Punks) and added a fun “Black Alert!” to create an exciting montage of VFX shots from the first nine episodes of Discovery.  The cuts are quick and action packed, and promise a show that’s a non-stop rollercoaster ride.  The sequence is really well edited, with transitions that hit perfectly on the beats of the music and a lettering style that matches closely to what appears in the original version.  An all-around spectacular job…

There’s a couple of reasons that NicholsonD (a.k.a Dennis Alexander Nicholson) got the top spot from me.  First, when it comes to Star Trek, I’m a traditionalist; I love what’s come before.  And while I know that CBS wants Discovery to be fresh and different and stand on its own as a modern, cutting-edge Star Trek series, it was still a special feeling for me to see a title sequence done in the style of Deep Space Nine and Voyager.  And second, as I said earlier, I’m in awe of people who can compose and produce their own original music.  Dennis wrote “Trek Through The Stars” as an inspirational piece of music, and inspire it does…as Star Trek always should!

Okay, yeah, I’m sneaking in one more.  When Discovery aired its season one finale, the episode ended with the surprise appearance of the USS Enterprise, followed by a new rendition of the Alexander Courage theme from the original Star Trek over the closing credits.  Leandro Martins Pinto Magalhães thought it might be fun to redo those closing credits in the same style as TOS did 50 years ago.  And guess what?  It IS fun!  Take a look…

Oh, and don’t think I didn’t notice that the final image is of Clint Howard’s appearance in the Discovery finale.  Clint Howard played Balok at the end of the TOS episode “The Corbomite Maneuver.”  Balok’s mannequin alter-ego appeared at the end of the closing credits during TOS’s second season.  So, yeah, Leandro, I noticed that… 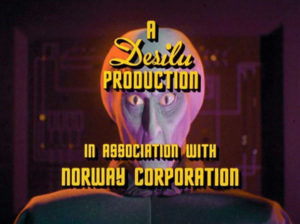