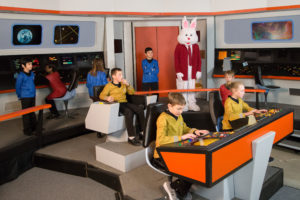 The previous summer, Kevin had agreed to compose and record music for GLEN WOLFE’s and DAN REYNOLD’s fan production “Walking Bear, Running Wolf” (part of their FEDERATION FILES anthology fan series).  In exchange, Kevin was invited to bring his 4th and 5th grade students to the Starbase Studios TOS sets in Marble Falls, Arkansas (about three hours from Parkview Elementary) to spend a day there filming.

The finished product was released a couple of weeks ago and is already up to an impressive 3,200 views.  I consider this a MUST SEE Trek fan film not simply because the kids are adorable but because it really is a remarkably well-produced fan film!  It’s well-lit with lots of interesting camera angles, the sound levels are perfect, the music is great (the kids even get to sing!), there’s amazing make-up on Spock and the Klingons (plus really nice TOS Klingon uniforms), and all of the children do a spectacular job.

But don’t just take my word for it, have a look…

I reached out to Kevin for an interview, and we had a wonderful chat.  Toward the end, he told me that a photographer named BRENDA YELVINGTON had taken hundreds of behind-the-scenes photos, and offered to let me use them for the interview.

Normally, I just do my audio interviews as MP3 files with no visual elements.  But this time, I was able to do something a little extra special and turn the interview into a full YouTube video.  But before anyone says, “That looked really great, Jonathan, you should do it more often…” it only works when you’ve got hundreds of photos and I have a lot of extra time!

Anyway, now that you’ve watched this wonderful little fan film, please enjoy this behind-the-scenes look at group of kids and adults who made it possible…