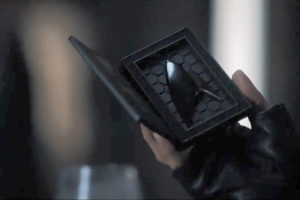 Over this past weekend, at WonderCon in Anaheim, CA, STAR TREK: DISCOVERY show-runner AARON HARBERTS released what he referred to as a “secret scene. ” He told the audience, in what I thought was a strange comment, that they decided to cut the scene out of the season one finale because it would be “…more exciting to bring it to a place like [WonderCon].”

By now, many of you have probably viewed the two and a half-minute “secret scene” (complete with a full minute and a half of credits…which seemed odd and unnecessary to me).  If you’re in the U.S., you can view the clip below…

And in a case of international legalistic inconvenience, those folks in Canada can only watch it here, and the rest of the world can see it here.

Almost immediately, fans started talking excitedly about this “new” scene and what it means for season two.  And not surprisingly, a whole bunch of folks e-mailed and/or IM’d me to ask what I thought about it.  I guess all those Discovery blogs I’ve written have marked me as some kind of fan barometer or something…or maybe they were just hoping I had some interesting insight or that maybe I’d find some fun way to trash the scene.  Who knows?

But since I’ve had a bunch of people ask for my opinion, I thought it best to just write it once.  Obviously, I’m not going to put any spoiler warnings here, as the season ended last month and the “secret scene” is right here on this blog.

So here we go…

Writers are allowed to change their minds…and often do.  Also, they don’t always figure out everything that’s going to happen all at once, and sometimes they’ll plant “seeds” of stuff they hope or expect to develop further at a later point.  Such was the case with the Section 31 reference in Discovery‘s third episode, “Context Is for Kings”…

At the time, many fans (including myself) thought this Starfleet black badge represented Section 31 and that the USS Discovery (NCC-1031…did you notice the “31”? Of course you did!) was some kind of “black ops” ship.  Black badge, black ops…even the “black alert” had the word “black” in it.  Dark show!

Of course, we viewers couldn’t be certain, especially since the black-badge guys were never seen again in any of the remaining dozen episodes.  However, now the “secret scene” confirms that, yes, the black badge does indeed mean that the person wearing it is Section 31.

As a side note, if the idea of your ultra-secret, clandestine, no-one-knows-about-us organization is to keep it, well, secret…maybe you shouldn’t have a special uniform for your operatives that invites questions like, “Hey, dude, what does that black badge mean?  I’ve never seen it before; it’s cool!” 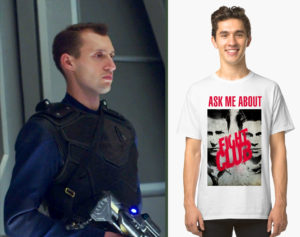 Anyway, it’s clear that the writers initially intended to make Section 31 more a part of season one and then changed their minds.  Why?  Well, hey, shat happens.  And as storylines got worked out, the writers probably realized they already had a lot on their plates and needed to trim back a few things in order to include everything they wanted to in the remaining twelve episodes.  And so out went Section 31!

THE THREE ENDINGS FOR SEASON ONE

It’s obvious that three different endings were filmed for the season one finale.  Of course, there’s the “secret scene,” which certainly provides a tantalizing tease that Section 13 might be coming in season two.  But remember that this episode was written long before the production team ever learned that they had been renewed.  Filming wrapped on October 12, 2017, but the show’s renewal wasn’t announced until October 23.

That means that, most likely, the episode initially ended like this…

It’s a good ending, hopeful, and leaves open the possibility for anything…including a lack of a season two.  Had there been no renewal of the series,  Star Trek: Discovery could have ended right there, wrapped up nicely with a bow.

So what very likely happened was, just in case they did get renewed, the alternate Section 31 scene was filmed as a possible epilogue leading with a cliffhanger into season two.  It was very probably filmed along with the final episode, as it used the same sets and lighting as the Qo’noS brothel/cabaret  scenes that appeared earlier in the episode.

And then there was ending number three, the one that was actually used, with the unexpected arrival of the USS Enterprise…

So what happened to make the producers decide to keep the Enterprise ending and ditch/delay the Section 31 ending?

Here’s where we get into rumor and conjecture, so take the next few paragraphs with crate of salt tablets…

Okay, so the first question is “When did they film the Enterprise ending?”  It’s likely that the Section 31 ending was filmed concurrently with the rest of the finale episode because there were extras in full make-up and a lot of cameras were set up to cover a good portion of those brothel sets.  Likely, those shots were filmed when the other scenes that took place in those sets were filmed and all of the lighting was set up properly.  And as I said, they probably wanted to get a usable “cliffhanger” ending option in the can on the chance that they got renewed for a second season (which, admittedly, was probably something most of the producers thought was very likely).

So was the Enterprise ending filmed along with the rest of the season finale…or did it come later?

There have been rumors that the Enterprise ending was filmed days or even weeks later, while the cast was still up in Toronto and available for reshoots, pick-ups, ADR, etc.  Apparently, according to these same rumors, not everyone was happy with the Section 31 ending.  By mid-to-late October, feedback was coming in about the show’s first 5 or 6 episodes, new subscriptions to All Access were modest at best, and the higher-ups were a little concerned about what was going to be shown at the end of season one to generate excitement for season two.  They weren’t panicking about Discovery (as some as conjectured), but they did want something really exciting for fans to be the last scene of the finale.

Many of these higher-ups aren’t hard-core Star Trek fans, and when they heard the final line was “Welcome to Section 31…” they apparently responded with something akin to, “What in blazes is a Section 31????”  (At least, that’s the rumor.)

When the meaning of Section 31 was explained to them by the producers, I imagine their response must have sounded like, “Wait a second!  You’re saying that this Section 31 was mentioned in just three episodes of Deep Space Nine and four episodes of Enterprise?  That’s it???  Who cares about THAT???  Look, we need something that EVERY fan is going to get excited about, not just the ones who know about this Section 31 thing.  Go big or go home.  Figure out a way to get everybody talking about season two!”

And apparently, that’s what led to the Enterprise epilogue scene…if you believe the rumors, that is.

Frankly, I’m tempted to believe them.  After all, the Enterprise epilogue scene was a pretty easy one to film and could have been set up and shot in probably half a day or less.  It only used one set (the bridge) with well-established lighting and camera placement, relatively minimal camera movement, and a few inserted VFX shots to reduce the amount of footage needed.  So the scene could have been written and shot after the main filming wrapped in mid-October.

But even if both endings were, in fact, shot during the filming of the actual episode, I can still imagine the higher-ups being shown both possible epilogues and choosing their preferred one.  After all, it’s doubtful both epilogues would have worked together.  Certainly the Enterprise ending needed to be the last thing fans saw, as it’s the way more exciting of the two.  But would the episode have flowed if we went from the Starfleet ceremony back to Georgiou on Qo’noS talking to the Section 31 guy and then back to the Discovery encountering the Enterprise?  That feels like an unnecessary layering of cliffhanger after cliffhanger.

It makes much more sense (at least in my head) that a choice was made, and that the Section 31 scene could easily be held to insert into the following season.  It’s not like such a move is unprecedented on TV or sci-fi.  Babylon 5‘s final scene was filmed during season four but not shown until season five.  It’s rare, but it does happen.

IS SECTION 31 A GOOD OR BAD PLAN FOR SEASON TWO?

As far as I’m concerned, it depends what they do with it.  Like many fans, I’m intrigued with Section 31 and want to learn more.  But what is the best way to handle them?  Is Section 31 just a convenient bad guy (like they were in DS9)?  Are they a good guy that we don’t like to admit that we need in order to do the dirty work (which kind of happened in Enterprise)?  Or are they somewhere in between?

It’s possible that Section 31 can make season two a bit more interesting than simply exploring strange, new worlds.  But on the other hand, I do sorta want Discovery to, y’know, DISCOVER things next season.  All the dark intensity, the politics, the intrigue, the hidden agendas…that pretty much filled up season one.  Will it fill up season two, as well?  Are we no longer watching Star Trek so much as a cross between The Last Ship and 24…but in space?

I guess I’m—as I was before season one premiered—cautiously optimistic.  Section 31 can be fun to play with and allow the series to explore yet another set of morally ambiguous questions that must be deeply pondered.  But it’s also very Earth-centered and Starfleet-based.  While both of these elements should play some role in Star Trek, if there’s too much of either, the stories can easily lose the “Star,” the “Trek,” or both.