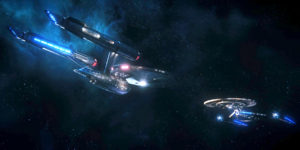 Now THIS is exciting!  I don’t know whether the producers of STAR TREK: DISCOVERY
intentionally leaked this snippet of the script for the first episode of season two or if it just “sneaked” out the door somehow.  But it provides an intriguing look at the direction the creative team will be taking going into the second season.

As has been reported elsewhere, the writing team for Discovery re-assembled at the beginning of last month to begin breaking down season two.  Co-creator Alex Kurtzman, who will be directing the first episode of season two, recently explained, “Breaking story is, in some ways, the easier and faster thing; it’s the ability to execute on it that’s much harder. We want to take the right amount of time and don’t want to rush.”

But with production on the first episode set to kick off later this month, the first script needed to be completed quickly.  Jonathan Frakes, who just confirmed that he will be directing an episode later in season two, commented, “I just read the first script of the second season and the outline for the second script and it’s on fire now.”

Indeed!  And from this leaked scene, I think he’s right.

Granted, there’s no guarantee that the following snippet from the season two premiere script will make it into the actual episode exactly as initially written.  Dialog can get changed, segments added and cut, etc.  But if this leaked scene does make it into the finished episode, I think we’ll all be very surprised and even enthusiastic about the new direction of the series now that the Klingon War is over.

Naturally, the most exciting thing about this leaked snippet is that fans get a glimpse into how the series will be handing the character of Captain Christopher Pike of the USS Enterprise who, like Sarek, Amanda, and Harry Mudd, has already been seen in canonical Star Trek history.  Will Captain Pike hew closely to his original version (like Sarek does), or will he be a radical departure (like Harry Mudd)?

I’m not sure if I’m even allowed to post this, so read it fast before I get an e-mail on Monday morning from someone with the initials of “C.B.S.” telling me to immediately take it down.

VFX: The two starships sit ominously silent in space, facing each other.  The moment hangs before we…

Establishing shot of the crew manning their stations: SARU, BURNHAM, STAMETS, TILLY, DETMER, and the rest.  SAREK is also present.  All are listening intently, waiting for the message from ENTERPRISE to become intelligible.

I think I’ve cleared up the subspace interference.  Comm channel with ENTERPRISE open.

This is Captain Christopher Pike of the USS ENTERPRISE on emergency channel. Please respond.

Reaction shots from crew members around the bridge, looking concerned but ready for action.

Burnham presses a few buttons, and PIKE appears on their bridge as a translucent hologram.  PIKE looks around, confused and disoriented.

What’s going on?  I’m still standing on my bridge looking at your bridge on my view screen, but I can see myself standing on your bridge.  How is that possible?

It’s WHAT???  Starfleet doesn’t have that!  Who am I talking to?

This is Acting Captain Saru of the USS DISCOVERY.  Thank you for contacting us.  How may I direct your call?

DISCOVERY, we have a dire situation. We urgently need to discuss continuity for the future. You’ve gotten us into one hell of a mess…

HOLD MUSIC
(As crew looks at each other with confused expressions,
the following song plays under their concerned glances…)

It’s been a long road, getting from there to here. It’s been a looooong time, but my time is finally near. And I can see my dream come alive—

BURNHAM
(steps forward from her station)

This is Commander Michael Burnham. Please state your emergency.

The mutineer?  Burnham, where’s your captain?

I have all the important dialogue on this ship, Captain Pike. I am a Starfleet officer, and I bleed Starfleet principles. I am its very conscience, and the firmness of the ground on which it stands. There is no higher calling than to carry the shining torch of our ideals. We must cling dearly to these principles or we are nothing but the bleak vacuum of space.

PIKE’s hologram looks down at his watch.

I am duty-bound to be the voice of strength and reason among an otherwise unremarkable bridge crew with little meaningful dialogue. Without my guardianship of these principles, there will be no bold journeys across the final frontier…only cancellation and despair.

This is hardly the time for principles, Burnham! There are so many things to fix, I don’t know where to even start.  And it’s not just this crazy hologram technology you use to communicate or the fact that you don’t have proper buttons that look like candy and marbles glued to your consoles or that you don’t use paper computer printouts.  No, the problem is MUCH bigger than that!

To what problem are you referring, Captain?

For one thing, we’ve got to completely erase your spore-drive from history. You can’t just magic yourself from one corner of the galaxy to another. And you have a spinning—thing!—on your primary hull for no reason whatsoever. Your uniforms look like shell suits, and the Klingons are ridiculous. They can hardly even lift their arms in those bulky outfits, let alone fight convincingly!  And I can barely read those awful subtitles…

Do not doubt my principles, Captain Pike. Principles are all we have! Just ask Admiral Cornwell—I’ve just given her a verbal slapping she’ll never forget. You’re talking to a two-mutiny veteran here. And did I mention my principles? Boy, do I have principles…

Burnham…is this a joke? We don’t need non-stop principles, we need entertainment. I’ve got 203 people over here on a wagon train to the stars. Where are your miniskirts and coloured uniforms? Where are the back-stories for your plucky bridge crew? I’ve got a bunch of hot-blooded guys who want to make out with sexy space babes and shoot aliens. I’ve got redshirts galore ready to die in vain. I’ve even got a doctor who makes martinis, for Christ’s sake! It’s like MAD MEN in space. Nostalgia TV…this is what people want!

This is the 2250’s, Captain Pike, and those days are truly over. Our new adventures will feature gender-balanced, socio-political allegory smeared on with a trowel. Each week my bottom lip will quiver as I emancipate downtrodden aliens, eschew ancient Republican dogma, and wax lyrical about Starfleet’s highest Democratic principles.

What—no space chicks in skimpy costumes? Burnham are you serious?

Captain Pike, let me assure you that, despite your place in history, things are going to be different from now on. There will be no damsels in distress or green Orion slave women to objectify…only to emancipate.  Oh, and we’ll have green Orion slave MEN, as well, because our ideals are those of the highest gender-neutral purity.

There will be no daughters of mad scientists in need of discovering the ways of love from a strong male captain.  Those outdated stereotypes will be consigned to history. If we encounter such women, they will now be given the option of learning the ways of love from a man OR a woman…or both, if they’d like. We have crew members from all different sexual orientations.  In fact, most of our remaining male crew members are completely gay.

Actually, I am bi.  Most Kelpians are.  Now that I’ve become so popular, you will all be learning much more about me and my species in the coming episodes…I mean, in the coming months.

Isn’t the ship’s captain the one who is supposed to speak in situations like this?

You’re only ACTING captain right now, and I’m the one with top billing in the opening credits—and what’s up with that giant plant spitting us out during the title sequence? I don’t get it.

Anyway, I was on a roll.  Where was I again?  Oh, yeah, total gender equality and progressive-minded representations of the LGBTQCYDSAKHM community.

What do all those letters stand for?

I can’t remember all of them anymore…new letters keep getting added every few years.  But I will tell you what WE stand for: principles.  Did I mention those?  No longer will we aggressively engage violent alien races and try to defeat them in space combat.  Other franchises can waste their VFX budgets doing that.

Instead, we will meet hostility with a liberal-minded acceptance of diversity and embrace our foes and their belligerence with open arms.  No more Vulcan hello’s.

Someone has to stop them!

You can’t just give everyone you meet on a first contact mission a great big hug. Hell, I can’t even count how many self-aware computers are threatening to destroy the galaxy and have to be tricked into self-destructing themselves!

When you explore the final frontier, Burnham, you have to be prepared for the worst.

Oh, seeking out new life and new civilizations is only PART of what we do, Captain Pike.  And we’ll get to it eventually.

But isn’t your ship called “DISCOVERY”?

We’re on a voyage of SELF-discovery, Captain.  We’re trying to discover our own humanity.

I should point out that I am not human.

I would respectfully disagree, Commander.  I’m very tall, I have hoofed feet and ganglia, and I can sense the coming of death…which no human is capable of doing unless they’re about to stick a fork into a toaster.  Oh, and I can run significantly faster than any human.

Commander, may I say something?

Actually, I’ve got something important to add.

Because you don’t get paid enough to talk, Detmer.  Now, Tilly, what did you want to say?

I think I forgot.

SAREK
(quiet aside to STAMETS)

BURNHAM turns back to face the hologram of PIKE.

As I was saying…

By discovering our humanity—

BURNHAM (cont.)
(back to PIKE)

By discovering our inner moral compass, we can evolve from being a crew of prissy divas who haven’t had our morning coffee yet into noble Starfleet officers carrying the ideals of the United Federation of Planets to the farthest reaches of our galaxy…which we can now get to if we ever decide to plug in the magic mushroom drive again.

They’re NOT magic mushrooms, dammit!!  They’re multi-dimensional cosmic spore entities linked to the vast Mycelial Network that spans across this universe and beyond…

….and they just happen to be, um, mushrooms.  But they’re NOT magic!

These are our principles, Captain. Yes, I am a Starfleet Officer, and yes, I will no longer take shortcuts on my way to righteousness. I bleed Starfleet princip—

Oh, give it a rest, Burnham! I’ve got a female XO of my own, but she knows when to keep quiet.

PIKE looks downward to his right, and suddenly his first officer, NUMBER ONE, appears as a translucent hologram next to him, seated at a translucent helm console.

NUMBER ONE, ready main phasers, and take that ship out. Then get me a scotch and a couple of aspirin.

NUMBER ONE
(looking up at Pike with concern)

The hologram fades away from the DISCOVERY bridge, but we can still hear PIKE’s angry voice.

My thanks to Fan Film Factor reader BORIS from the United Kingdom for helping me to discover this “leak” just in time for the first day of April.  Thanks, Boris!