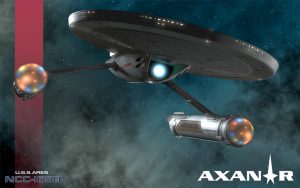 AXANAR has a new co-writer!  Ladies and gentlemen, meet PAUL JENKINS.  As you can see from his IMDb page, this bloke (he’s British) has done a LOT of stuff in television, film, and video games.  He’s also one of the writers credited with helping to rescue Marvel Comics from Chapter 11 bankruptcy in the late 1990s with the introduction of the “Marvel Knights” series of titles.  Since then, Paul has written everything from Spider-Man and the Incredible Hulk to the ground-breaking Wolverine: Origin (which served as the basis for the feature film with Hugh Jackman).

And now, Paul will be helping ALEC PETERS complete the scripts for the Axanar fan films.

The script for Axanar has trekked a long road.  Alec first began working on the story back in 2011.  And Alec welcomed input from folks like John Muenchrath (who played Dr. McCoy on Star Trek: New Voyages under the stage name “John Kelley”), Star Trek novelist Dave Galanter (see Dave Galanter’s post below in the comments section), Prelude to Axanar director Christian Gossett, and of course, “Trouble with Tribbles” episode writer David Gerrold.  During 2015, then-Axanar director ROBERT MEYER BURNETT brought on BILL HUNT to take yet another pass at tweaking the script.  By the time Axanar was ready to shoot in early 2016, the 90-minute script was already on version 7.

During the lawsuit, Bill Hunt and Alec worked on additional revisions of the script.   I read one of their iterations, and it was up to version 9.

Finally, after the lawsuit settled, Alec was permitted to make Axanar not as a 90-minute feature film but rather as two 15-minute short fan films.  There would still be a full 90-minute script distributed to donors, but two 15-minute scripts would now need to be written, based on the longer version.

Alec decided to write the new 15-minute scripts as “Part IV” and “Part V” of The Four Years War mock documentary, with Prelude to Axanar having been “Part III.”  The first drafts of both of those scripts were completed by Alec this past summer, with a number of people (including me) reviewing them an providing feedback.  Then, on October 6, Alec announced that Paul Jenkins would be joining the Axanar team as co-writer.

So what was a major comic book and Hollywood writer was doing coming to work on a Star Trek fan film???