The name of this blog is FAN FILM FACTOR, and if it has to do with Star Trek fan films, it’s news to this website.  And so with that, I’ve got some more to report on what’s been happening here in Las Vegas (which is, obviously, not staying in Vegas)…

First of all, I did manage to verify from another celebrity guest that fan films in general and Axanar in particular were a forbidden topic at the con (and again, Creation had spoken to that actor’s agent, not the actor directly).  And this guest told me that a good number of people had come over to their autograph table wanting to discuss this or that fan series, and obviously, that didn’t happen.

However, despite what happened on stage on Friday during the segment with Tim Russ, Ethan Phillips, and Garrett Wang, apparently one member of the Renegades cast DID talk rather extensively about that project.  The guest was Walter “Chekov” Koenig, who plays a role in the series.  I wasn’t there to see Walter’s presentation myself, but I did speak to someone who was in the audience during his talk.  And apparently, Walter made it clear that Renegades: The Series is no longer a Star Trek fan film (it’s now an independent sci-fi production), and therefore, it was okay to discuss it openly at the convention…which he proceeded to do.

The second interesting thing I heard came after I posted my previous blog entry about Creation’s new policy.  Alec Peters of Axanar came over to talk to me and shared that Creation co-founder Gary Berman had approached Alec directly and asked specifically that he not wear any Axanar T-shirts or costumes during the convention.  Apparently, according to Alec, this did not apply to other fan series, as he told me he’d seen Vic Mignogna [show-runner and star of Star Trek Continues] walking around wearing a Star Trek Continues T-shirt. 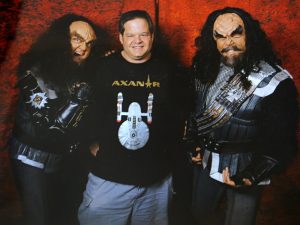 And apparently, the moratorium on Axanar T-shirts didn’t apply to “normal” attendees like yours truly, as I got to wear my custom-make Axanar T-shirt all day long on Wednesday and even took this awesome photo with J.G. Hertzler (who appeared in Prelude to Axanar) and Robert O’Reilly in their characters of General Martok and Chancellor Gowron.  They even growled at my shirt…as the Klingons might not be the biggest fans of the USS Ares class.  So no, I was never asked to remove my shirt (and the rest of the attendees breathed a HUGE sigh of relief!).

The last fan film-related item worth reporting on came during the Saturday evening concert by the band The Roddenberries…the most AWESOME Star Trek rock band I have EVER seen!  I missed their shows earlier in the week, but I caught their final one and was kicking myself for missing the others.  If you ever have a chance to see these guys live, DO IT!  They’re amazing.

They’re also no strangers to the latest fan film controversies, as I learned when I watched this song intro about halfway through the 90-minute concert:

I guess the band didn’t get the memo.  Granted, Rod Roddenberry was sitting in the audience, and he played a major role in bringing the Roddenberries to play the Vegas con.  So there was probably a little extra leeway given to these musicians (and did I mention how AWESOME they are???).

And really, they didn’t technically mention the fan film Prelude to Axanar or say the name “Alec Peters.”  Instead, it was simply a song intro for “Space Lord” (originally recorded by the band Monster Magnet) sung by lead vocalist “Sister Spock,” dressed as a female Garth of Izar.  And she totally ROCKED the song (I’ll post more of the concert soon–after I’ve had time to edit it–because I really want people to see these guys do their thing).

But let’s face it, despite the “clever” way they avoided mentioning a particular controversial fan film, the audience knew who they were talking about…especially the cast members and crew of Star Trek Continues (including Vic Mignogna and Chris Doohan), who were themselves sitting in the audience.  In fact, a few songs later, Sister Spock spoke for a minute about Star Trek Continues and how much the whole Roddenberries band loves that fan series.  She invited Vic and Chris and company to stand up, and the audience gave them a well-deserved round of applause.