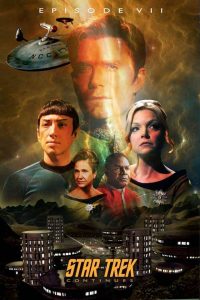 STAR TREK CONTINUES’ seventh full-length episode, “Embracing the Winds” is–at least in my opinion–a masterpiece.  It’s a MUST SEE+ Star Trek fan film and possibly one of the best ones released to date.  Fan reaction has ranged generally from positive to gushing, with almost no one saying anything overall negative (only pointing out this or that little issue…and we Trekkers always have our “little issues”).

But really, STC has continued to up their game, and the quality and watchability of their newest offering is superb.  The acting, writing, directing, pacing…everything is top-notch.  There’s not of a lot of “wasted” scenes where the viewer feels the production has indulged itself too much and stretched things out.  In short, it’s a tight, exciting story that does what Star Trek has traditionally done so well: take a modern day issue (in this case, a very politically charged one at the moment) and provide a “safe” mirror through which we can examine our society and beliefs…and look at ourselves with a critical eye. 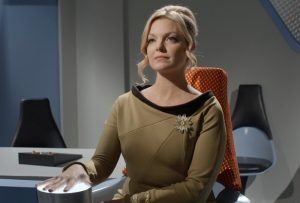 Indeed, the greatest compliment I can give to this latest episode is that I now want to talk about it with other fans!  I’m not giving spoilers here, but man, I so want to!  There’s just so much to discuss.  And my other sincere compliment is that, at least for me, this episode is now in my “head canon.”  As far as I’m concerned, the events of this episode actually happened early during the fifth year of the five-year mission.  So congratulations, STC team, for another triumph…possibly your greatest one yet!

But with such an amazing, quality fan production, the debate about the fan film guidelines has heated up yet again.  One fan, Fred Archer, summed it up pretty concisely: “…[this latest STC episode] is genuine proof the fan film guidelines DO NOT WORK.  A story like the one they told CANNOT be told in 15 minutes.”  Granted, STC could have done a two-parter totaling 30 minutes, but even then, I don’t think it would have worked.  This 44-minute episode was tightly edited.  There were maybe 3 or 4 minutes of dialogue that didn’t really serve much of a purpose (Sulu discussing going to a museum, for example, although still necessary to give a reason for him not being on a Enterprise…and I will say no more about it for fear of spoiling).

Another fan, Mickey Goins, pointed out that STC is “…also in flagrant violation of Guidelines 1-8.”  Granted, this episode was already in post production when the guidelines were announced, so it’s being assumed by the producers (and by some other fan films like Star Trek: Raven) that the almost-completed production might be “grandfathered in” and not earn the legal wrath of CBS and Paramount…at least not this time.  But STC is still planning to produce and release four more original episodes (as discussed here), and one would assume they will continue to do so in a way that does not follow most of the guidelines.  And while it isn’t as bad as violating all or even most of guidelines 1-8 (sorry, Mickey), they still come in conflict with a few of the biggies.

For example, simply by being an ongoing fan series, STC violates the first guideline, which says “…with no additional seasons, episodes, parts, sequels or remakes.”  STC has released seven episodes so far and plans four more.  Also, the 15-minute time limit of the first guideline is pretty much ignored, as STC episodes are typically about 45 minutes in length, just like TOS episodes were five decades ago.

Of course, STC has the words “Star Trek” in the title, but that guideline and many of the others are minor rumbles.  Where the big earthquakes hit are in Guidelines #5 and #6, which limit the amount of funding that can be publicly crowd-sourced and, of course, the moratorium on using professionals or paying any participant who works on the fan production.

STC, according to writer/director/co-producer James Kerwin, has about $400,000 available to spend on their final four episodes…about half of which was generated through their most recent Indiegogo crowd-funding campaign.  Technically, that campaign finished before the guidelines were announced, and STC is not planning another at this point.  (They are, however, asking for donations directly through their website.)  So really, STC won’t be violating guideline #6 limiting crowdfunding to $50,000 anytime soon.

But then there’s the infamous Guideline #5:

The fan production must be a real “fan” production, i.e., creators, actors and all other participants must be amateurs, cannot be compensated for their services, and cannot be currently or previously employed on any Star Trek series, films, production of DVDs or with any of CBS or Paramount Pictures’ licensees.

Like many other of the major fan productions such as Renegades, Axanar, Of Gods and Men, and New Voyages–and even some of the “smaller” ones like Starship Farragut and Equinox–STC uses professional actors (members of the SAG-AFTRA union) and even some professionals who have previously appeared on studio-produced Star Trek or other sci-fi series.  In STC‘s latest episode, Marina “Counselor Troi” Sirtis voices the Starfleet computer (and considering that Troi’s mother, Lwaxana, was played by the actress who voiced the Starfleet computer originally, Majel Barrett, Marina Sirtis’ casting seems wonderfully appropriate). But as someone who has previously worked on Star Trek professionally, Marina’s participation in the production would be prohibited by guideline #5.

Vic Mignogna himself, who portrays Captain Kirk (and I, for one, love his performances), did voice-over work for Star Trek Online, which is an officially licensed Star Trek product.  So he also would be barred from working on the very production he himself founded, funded, nurtured, and brought to fruition.  Also in this latest episode, actress Erin Gray (who played Commander Wilma Deering on Buck Rogers in the 25th Century nearly 27 years ago) plays a Starfleet commodore and starbase commander.  And even though she wouldn’t be barred from participating because she’s previously worked on Star Trek, she wouldn’t be allowed to be paid to be part of the production.  And STC does, in fact, pay some of their actors and crew (which is the case for a fair number Star Trek fan productions, such as Axanar and Renegades and others).

Granted, many fans are not aware that paying professionals and others salaries on “fan” productions is as common a practice as it is, since most productions don’t discuss it (and when they do, they tend to get sued…don’t they, Mr. Peters?).  But as was publicly documented when STC applied for their 501(c)(3) tax-exempt non-profit status application (on page 9, which I’ve screen-capped and highlighted below), the STC production pays actors about $12,000 on average per year (for the past three years) in contractual fees.  That not too much, all things considered.  A big-name professional actor might only be making a few thousand dollars to appear in an episode of STC, and that’s a bargain.

STC also pays about $40,000-$50,000 annually in contract labor to crew members over the last three years.  (I’ve highlighted that line item in yellow, as well.)  In this addendum to their 501(c)(3) application, STC explained this $139K expense as follows:

In the interest of full disclosure, some of the professional “guest stars,” episode directors (but not if a board member), stage managers, cinematographers, video editors, special effects experts, etc. have been compensated in sums approaching $4000 per year – about $500-$2500 per episode, depending on the skill level. All are working for approximately 10% of the amount they would usually bill a for-profit production company. All Forms 1099 have been filed and are available for in camera review on request.

My point here is a simple one: those arguing that the guidelines, constraining as they are, still allow for creative storytelling within the strict limits imposed…they are NOT entirely wrong–believe it or not!–but they’re not entirely right either.

What STC has just produced is a masterpiece, but it required 44 minutes to tell the story, it cost about $100,000 to make (according to comments from James Kerwin of an average cost of about $100,000 per episode), and it needed to hire and pay professional actors and crew to do so.

Can a fan film masterpiece still be made for $50,000, last for just 15 minutes, use no professionals at all, and compensate no one?  Sure.  But take a look at the following painting… 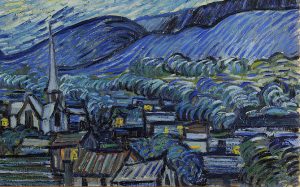 A very famous artist painted it back in 1888.  It’s pretty…isn’t it?  Definitely a masterpiece in its own right.  However, this artist actually had a much larger canvas to work with than what I’ve just shown you.  What you see here is just a small portion of what could have been painted…had I not just arbitrarily imposed constraints on the size of this artist’s canvas.

If you’re curious to see what he painted without those limitations and restrictions, click here.

The same holds true for fan films.  I, along with a number of other fans, agree that a good short story can be told in 15 minutes and for $50,000 or less with no professionals getting paid.  And we also agree that million-dollar fan films reaching feature length proportions may, indeed, be crossing the line and moving into territory that should rightly be claimed by the studios.

But do the studios really need to make the guidelines so restrictive, the canvas made so small, that a masterpiece like STC‘s latest episode could never be made without risking legal action?  Isn’t there a middle ground somewhere between the extremes of no limits and the current Draconian limits?

That’s our point…and our plea to the studios:

Limit fan films if you must.  Having guidelines that define a safe harbor is actually a welcome development.  Just please don’t go so far as to turn an inspirational sky full of stars into a dark night lit only by the dim glow of a few valiant and intrepid survivors…themselves struggling to shine through the stifling haze of restrictions that allows their light to burn only so brightly before it must be snuffed out.