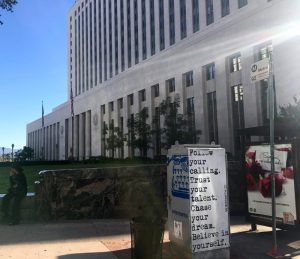 The motions for summary judgment had been filed last month by both parties in the AXANAR lawsuit, followed by opposition briefs and reply briefs from both sides.  Next Monday, at 9:00 a.m. at the Ninth Circuit Federal Court Building, lawyers from both sides were scheduled to appear before Judge R. Gary Klausner to argue the merits of their motions and oppose the other side.  And I was planning to be there.

Looks like I don’t have to schlep to downtown anymore.  The court just sent the following message to the attorneys in the case:

SCHEDULING NOTICE TO ALL PARTIES AND ORDER by Judge R. Gary Klausner. Plaintiffs CBS Studios Inc. and Paramount Pictures Corporation’s Motion for Partial Summary Judgment [72, 85] and Defendants Axanar Productions, Inc. and Alec Peters’ Motion for Summary Judgment [75], calendared for hearing on December 19, 2016, have been taken under submission and off the motion calendar. No appearances by counsel are necessary. The Court will issue a ruling after full consideration of properly submitted pleadings. IT IS SO ORDERED.

In other words, Judge Klausner will decide the motions based solely on the documents that have been filed.  This is not unusual for him.  In fact, I am told that it’s unusual for him to NOT cancel oral arguments!

And so his decision could come at any moment–today, tomorrow, next week–and when it does, you can believe I’m gonna post it as soon as I can!!!

23 thoughts on “BREAKING NEWS – ORAL ARGUMENTS in the AXANAR LAWSUIT have been CANCELED for next Monday!”