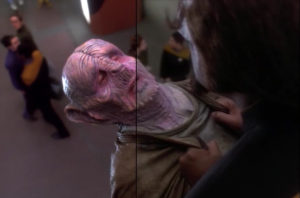 Yesterday, I reported that the new Deep Space Nine documentary WHAT WE LEFT BEHIND had just crossed the $400,000 milestone on their Indiegogo campaign (with 9 days left).  This amount is well more than double their original goal of $150,000 and has allowed them to reach certain stretch goals.  Among these are a longer running length (from 60 to 90+ minutes), an extended writers room feature, original music performed by an orchestra, and new 3D graphics and animations.

Their next goal is $425,000 (allowing for more interviews), but there was also a $500,000 stretch goal that was left a mystery…at least when I wrote yesterday’s blog entry.  Now the veil has been lifted and the mysterious half-million-dollar stretch goal revealed:

When Star Trek: The Next Generation was remastered into high-definition (HD), it took several years and cost millions of dollars.  Original film negatives were meticulously re-edited while entirely new VFX sequences were modeled and rendered by computer.  But in the end, sales of the remastered ST:TNG Blu-rays were disappointing (to say the least), leaving CBS and Paramount quite hesitant about ever trying to remaster DS9.

Now, before anyone starts drooling about this Indiegogo campaign resulting in a complete HD-remastered Blu-ray collection of all seven seasons of Star Trek: Deep Space Nine, that’s not going to happen…and certainly not for a measly $75,000.  But their next stretch goal level will potentially allow the producers to remaster the DS9 clips that they’ll be showing during the documentary.  This involves getting access to the original archival masters and original film elements from the Deep Space Nine series. The documentary team announced yesterday that they have, in fact, officially been in talks with CBS Television Studios to do just that.

And if they manage to hit or surpass $500,000 in the next 8 days (right now, they stand at $413, 374–so it’s certainly within reach!–click HERE to donate), they will be able to use that footage along with CGI effects rendered by DS9 VFX alum Doug Drexler to give fans a taste of what DS9 could look like if it were ever to be remastered.