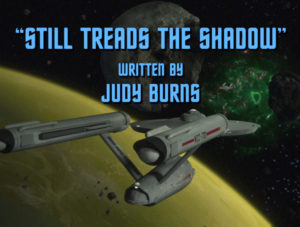 Once again, STAR TREK CONTINUES proves itself the undisputed king of the Trek fan film genre.  This isn’t meant as a slight against any other fan film or series.  It’s simply that STC‘s eight full episodes just get better and better and are all but flawless in their interpretation of classic Star Trek.  They tell stories that are both well-written and extraordinarily well-produced and well-directed…with excellent editing, musical scoring, visual effects, costumes, make-up, lighting, and of course, meticulously recreated TOS sets.

“Still Treads the Shadow” was written by Judy Burns, a professional Hollywood screenwriter and producer with a long list of credits.  And her very first one was as co-writer for the third season TOS episode “The Tholian Web”…which should be kept in mind as fans watch this latest episode from STC.  (No spoilers!)  Also of note is a guest appearance by Battlestar Galactica series regular Rekha Sharma (one of the final five “sleeper” Cylons), who has an extensive list of Hollywood television roles.  The episode was directed be Julian Higgins, who also directed the sixth episode of Star Trek Continues, “Come Not Between the Dragons.”  Both episodes were magnificently directed.

In the finest traditions of Star Trek, this latest episode provides wonderful literary themes that serve to richly enhance the viewing experience.  The title, “Still Treads the Shadow,” is taken from poetic masterpiece The Rhyme of the Ancient Mariner by Samuel Taylor Coleridge.  A passage from that epic poem is quoted during the episode, and I highly recommend that you click that link I just provided and (re)read that classic work (especially if you skipped reading it in high school!).  It will provide some interesting insights into the symbolic “ancient mariner” who appears in this episode.

So now the question is: what will CBS and Paramount do…if anything?  STC has now finished production on its final four episodes (this being the first of them) and plans to release all of them over the next several months.  And although the $200,000 in crowd-funding was completed shortly before the new fan film guidelines went into effect, the run-time of this episode is 54 minutes (longer thsn 15 minute), it’s part of a continuing fan series, it features paid professionals including alumni of studio-based Star Trek productions (including writer Judy Burns and star/executive producer Vic Mignogna himself, who worked on Star Trek Online), and of course, it has the words “Star Trek” in the title.

In the meantime, “Still Treads the Shadow” premiered yesterday at the Fan Expo Dallas convention with a sneak preview for donors.  But now it’s available for everyone.  Enjoy…