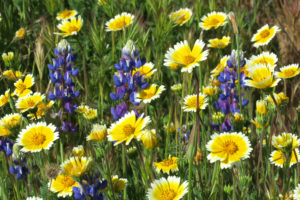 Yesterday, as many of you probably already know, ALEC PETERS broke the Internet by making this announcement.  Although the INDUSTRY STUDIOS Indiegogo campaign has raised $20,000 and still has 14 days to go, it looks like it will fall far short of the $60,000 goal (or their six-figure stretch goals).  And this has necessitated some hard decisions on the part of Alec, his team, and a few key donors.

It’s also led to a flurry of activity, accusation, and antagonism (I love alliteration!) on the part of the Axanar/Alec “detractor brigade”…along with a whole bunch of rumors that I’ve seen spring up like, well, like wildflowers during a California super-bloom!

And speaking of wildflowers, I’ve had a wonderful spring break vacation with my family this past week.  We visited Santa Barbara, Solvang, and finally Pismo Beach.  And this past Wednesday, while Wendy and Jayden enjoyed a lovely beach day, I took the car and drove 200 miles round trip to Carrizo Plain National Monument…a.k.a. “the middle of nowhere.”  Paved roads are a rarity there, but in a good rain year, the wildflowers can be stunning!  And this year, the bloom was indescribable…except through photos (and not even then, because you can’t smell photos).

So what do wildflowers and dirt roads have to do with Star Trek fan films and Industry Studios?  Absolutely nothing!  But unfortunately, the timing of Alec’s announcement corresponded with the final two days of our family vacation along the scenic Central California coast.  Today we drive 190 miles down US 101 back to L.A.  Then we unpack.

And while I have a lot to say about the breaking Industry Studios news and the crazy rumors (like eviction or that there never really was a landlord—sheesh, really???), I just don’t have the time at the moment…I have to pack up my computer in just a few more minutes!  Also, the situation itself is still developing and unfolding, and new details will be coming over the next few days and weeks.

So yes, expect some coverage here on Fan Film Factor with Jonathan’s usual colorful commentary.  But for right now—since it’s my blog and there’s no rules about what I can feature—I’d like to invite you to enjoy a different kind of colorful commentary and enjoy a sampling of 45 (out of 600!!!) of the best wildflower photos that I took at Carrizo Plain last Wednesday.  Just click on any of the images below…

A day-trip to the middle of nowhere yielded one of my best wildflower picture days ever!

9 thoughts on “And while everyone ELSE talks about Industry Studios…let’s look at some WILDFLOWERS!”