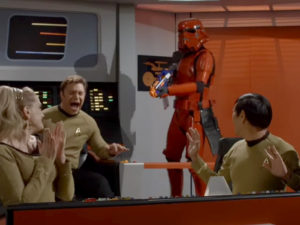 Bloopers.  Gag reels.  Behind-the-scenes flubs.  Call them what you will, but they’ve been a part of the Star Trek fan experience since the 1970s when Gene Roddenberry first began bringing his TOS “blooper reel” to conventions to show hilarious outtakes by Shatner, Nimoy, Kelley, and the rest of the original cast to fans in the audience.

The tradition continued with The Next Generation, and I recall owning bootlegged copies of both blooper reels on VHS tapes that I bought at cons in the late 1980s and early 1990s.

The reason these outtakes are so special and treasured isn’t simply because they’re funny but because they give fans a glimpse into who these beloved actors and producers were as people…people who make mistakes and can laugh at themselves, cut loose sometimes, and have fun.

Not all fan films collect their bloopers and release them.  Some don’t even have time to do multiple takes of the same scene.  Others simply have collections of goofs and flubs.  But the best of the gag reels contain just that: gags.  It’s not just the missed cues and forgotten lines.  Sometimes the actors know they’re going to have to do another take, and so they just go with it and have fun playing with the scene.  And if we’re lucky, hilarity ensues while the camera is still rolling.

Such is the case with Star Trek Continues.  They have edited together and released hysterically entertaining gag reels for all but their second episode.  (You can view all seven gag reel videos at the bottom section of this web page.)

It’s no secret that I love this particular fan series and lament its impending conclusion in the coming  year.  But I don’t love STC only because of the great episodes it produces.  I love it because of what I see on their gag reels.

I’ve worked on fan films, and it can be tedious, mind-numbing, stressful, exhausting, frustrating, irritable, and even confrontational.  But it can also be a lot of fun.  In fact, if it weren’t for the FUN, I can’t imagine why anyone would ever do it!  STC‘s gag reels show us the camaraderie that can exist at the core of fan productions.  Sure, the actors and crew work hard—incredibly hard!—but they play hard, too.  They laugh at themselves, play practical jokes on each other, and keep their sense of humor through the seemingly endless late-into-the-night hours when shoots can shift between moving at a snail’s pace to a manic sprint in the span of seconds.

So I invite you to join me and others in celebrating Star Trek Continues in that most special of ways: sharing their laughter…