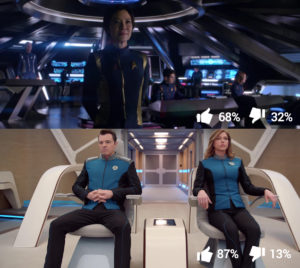 Last time, I discussed the recent release by two of the major networks of official trailers for their new sci-fi shows debuting for the upcoming 2017 season.  CBS, of course, unveiled STAR TREK: DISCOVERY, while FOX surprised (many) genre fans with a new Star Trek-ish series from Seth MacFarlane titled THE ORVILLE.  Both trailers were viewed millions of times with thousands of comments.  But what was very intriguing came from the thumbs-up/thumbs-down ratios.

The trailer for Star Trek: Discovery has about two and a half times more thumbs-down reactions than the trailer for The Orville.  Some misunderstood my previous blog and thought I was calling this a competition—as though fans were going to choose EITHER Discovery OR Orville.  Not quite.  Many fans (like me) might choose to watch both series.

But what makes this interesting is that we have a pretty close comparison of trailers and their reactions from viewers.  The two shows are coveting essentially the same audience (Trekkies and sci-fi fans), so the trailers and series themselves are unmistakably in the same “marketing category.”  The two trailers have almost the same run-length (2.5 minutes) and were released at nearly the same time using the same platform (Youtube).  But beyond that, the two networks are going in very different directions.

CBS is making Discovery available only through paid subscription streaming services (after a free preview of the pilot on CBS).  FOX is putting Orville on their regular network.  CBS went for a very unfamiliar (to Trekkers) production design with dark sets and mostly monochromatic uniforms.  FOX is using a very familiar-looking Star Trek visual approach of brightly-lit sets and and colorful uniforms.

So these two series are coveting the same kinds of fans with very different approaches.  One is very derivative of Star Trek but based within a different universe, and the other is very different but based within the Star Trek universe.  So the word “versus” in the title of this blog entry doesn’t imply that fans must make a choice but rather simply refers to putting the two series side-by-side for comparison, analyzing the very noticeable differences in fan reaction.

So with fans appearing to show a measurable preference for Orville over Discovery—admittedly using only online reaction through thumbs-up/down plus a general trend in posted comments—should CBS be worried?

Last time I listed the three main reasons that CBS should NOT be worried:

And now, let me move over to the opposite podium and argue for the other conclusion…

Why CBS should be worried

We need to understand two things.  First, you don’t have to contact millions of people to track polling data.  Those political pollsters who report this or that candidate is ahead by 9 percentage points usually poll only a few hundred or, at most, a few thousand people at a time.  Why are such polls considered reliable with such a relatively low number of respondents?  Rather than take up time explaining that, let me just provide you this link and tell you to scroll down to question #3.  They explain it better than I could.

But the important thing to know is that, while Orville may not be exactly 20% more popular among fans right now, there is still a likelihood that fans currently have more enthusiasm for Orville than for Discovery.  It’s hard to argue that fans are feeling less enthusiastic for Orville than Discovery.

And that brings us to the second thing, which is that CBS really needs approval numbers for Discovery that are HIGHER than Orville, not lower.  And the reason is pretty obvious: people have to do and pay more to see Discovery.  If you want to check out The Orville, just turn on FOX Thursday nights at 9:00 pm or set your DVR to record the show.  But if you want to watch Star Trek: Discovery, that’s a much more significant commitment on the viewer’s part.

Of course, the first thing I have to do as a viewer to watch Discovery (since I’m not planning to illegally download it) is pay $5.99/month for a subscription to CBS All Access (or the Canadian equivalent…or just watch on Netflix in the rest of the world)…or pay $9.99/month if I don’t want commercials.  But is that really the first thing I need to do?

I realize that some of you out there already subscribe to CBS All Access.  Others have smart boxes like Amazon FireTV or Roku or Apple TV or an XBox, etc.  And of course, the service will work on an iPad or iPhone or Android device.

And then there’s little ol’ me…and those like me.

I want to watch Star Trek: Discovery on my TV (I’m old-fashioned that way, and I want to invite over some friends).  So that rules out my iPhone and iPad.  My two smart blu-ray players in the house don’t have the ability to install the All Access software.  So for me, I’ll need to go out and buy a new smart box of some sort before I subscribe.

Now, I admit that that’s not a huge hassle; many smart boxes sell for under a hundred bucks.  But if I want to watch Discovery, I still have to do the following things:

Again, none of that is rocket surgery.  It’s just a multi-step process that involves some extra effort and spending on my part.  Now compare that to the steps I need to take to watch Orville:

See why Discovery needs to have loyalty and enthusiasm numbers HIGHER than Orville?  It doesn’t matter if the thumbs-up/down difference is 20%, 50%, or just 10% in favor of Orville.  CBS needs those numbers in FAVOR of Discovery (not vice-versa) because they are asking more from their viewers.

Sure TNG and DS9 and the other Trek series got off to rocky starts, too.  But in those cases, as good word-of-mouth spread among fans and the general public, more people tuned in.  Viewers’ only challenge was figuring out what channel to watch and when (since the shows were syndicated and on at different times in different markets).

But will people check out Discovery as readily?  Hardcore fans might if other hardcore fans report back favorably.  I’m not as certain about non-fans as Star Trek has 50 years of history behind it, and not as many “newbies” are interested in jumping onto a moving train already so far along in its journey.  But who knows?

Right now, CBS All Access has a subscriber base of under 2 million (it was barely 1.5 million back in February).  Their goal is to reach 4 million subscribers with the help of Star Trek: Discovery.  So if we assume an awesome number of viewers tune into the premiere (say 10-12 million), they need a conversion rate of 20% to attract 2 million new subscribers.

Right now, it’s not known whether they have such a strong conversion rate.  Based on CBS’s reticence to share specific numbers after the premiere of their other original series, The Good Fight, last February, one would reasonably assume it’s nothing to shout about (or else CBS would be shouting rather than keeping their mouths shut).  So assuming a low conversion rate, CBS needs a LOT of people to check out their free pilot premiere later this fall on the main network.

And who is most likely to watch that premiere?  Well, obviously the hard-core Trek fans represent a huge portion of the viewership, but we card-carrying Trekkies tend to skew a little older.  Right now, the average subscriber to All Access has an age of 42 or 43 (skewing younger than the typical CBS viewer) with 30% in the under-34 millennial range…according to this interview.  (It’s also a 60-40 female-male ratio, which may or may not have to do with why the two leading characters in Discovery are female…not that I’m complaining!)

In short, CBS needs the demographic mix of older Trekkies and younger general sci-fi fans…the ones that seem to feel so positively about the trailer for The Orville.  And CBS needs them to show up in huge numbers for the premiere in order to convert a decent percentage into subscribers.  So again, at least for now, the news isn’t great for CBS if they have an enthusiasm gap already.

And that brings us to the final argument for CBS not worrying: this trailer was cut for advertisers, NOT for fans.  That argument breaks down when you realize two things…

First, The Orville‘s trailer was ALSO meant for advertisers, as was The Gifted‘s trailer  (86% positive, 14% negative) and the Black Lightning trailer (87% positive, 13% negative).  Sure, the audience for superheros isn’t the same as general sci-fi and Star Trek, but there is a fair amount of overlap.  Most of the trailers seem to be matching the 87%/13% split of The Orville…making Discovery a notable exception.  Why did fans like all the other trailers cut for advertisers more than they liked the one for Discovery?

And finally, do you remember that first trailer for Star Trek Beyond with the Beastie Boys soundtrack?  That adrenaline-overloaded, action-packed jumble seemed more like The Trek and the Furious and so repelled  Star Trek fans that even Simon “Scotty” Pegg (who co-wrote the movie) was critical of it.  Eventually, the studio cut a new, less manic trailer that was much more warmly received by fans.  But was the damage already done?

They say you never get a second chance to make a first impression.  That might have been the case for Star Trek Beyond.  Of course, we’ll never know for certain, but a film that most fans agree was better than its predecessor, Star Trek Into Darkness, ended up grossing $70 million less.  It’s very possible that first “Beastie Boys” trailer dug a hole that Beyond simply wasn’t able to climb out of.  And it’s also now possible that Discovery might be in the same hole.

Granted, Discovery‘s hole might not be nearly as deep.  Last week’s trailer isn’t being universally panned by fans the way that Beyond‘s first trailer was.  At worst, according to those Youtube numbers, about two-thirds of viewers still liked what they saw.  So the sky isn’t falling.

But as I said above, CBS has a higher mountain to climb because the new series isn’t on regular network TV.  And the last thing they wanted was to have to begin climbing that mountain from a starting point already inside a hole…not a deep hole but still a hole.

So, should CBS be worried?  What do you think?

98 thoughts on “STAR TREK: DISCOVERY vs. THE ORVILLE – Should CBS be worried? (Part 2)”