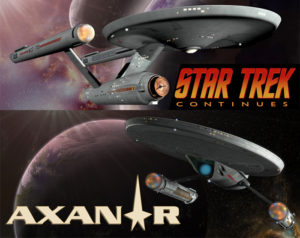 Last Wednesday, STAR TREK CONTINUES announced that none other than actor JOHN “Q” DE LANCIE is going to guest star in the ninth episode of their fan series, “What Ships Are For,” which will premiere the last weekend of July.

And now I am about to get myself into a shatload of trouble!  But before I jump into the smoldering volcano of fan film frenzy and fanatical fealty, let me state the following up front:

I love Vic Mignogna (not romantically, just as a fan).  Yes, I’ve heard him called every name in the book by people who don’t like him.  I’ve heard vitriolic complaints about Vic’s ego, lack of integrity, and even his acting ability.  (And I’ve heard similar rants about Alec Peters, by the way.)  The fact is: I don’t care!  I think very highly of both of these men…and for very similar reasons.  But for right now, let’s focus on why I love Vic.

Every fan production has one bright sun at the center of its solar system.  And for STC, that has always been Vic Mignogna.  He’s a leader and inspiration to his production team.  He makes things happen.  He has set the tone for an endeavor where everyone gives 200% and does it all with smiles while having a blast.  You can see it in their behind-the-scenes videos, and I’ve seen it in person at cons I’ve attended where the STC cast is in attendance…with Vic right there in the middle of the enthusiasm.

I also think Vic does a fantastic job being James T. Kirk.  Many have attempted the role—from the late/great John Belushi to Jim Carey and even Carol Burnett to fan film actors James Cawley and Brian Gross.  Each has brought something different and unique to the character.  So before any of you criticize Vic Mignogna for his performance, imagine yourself trying to portray the legendary captain of the USS Enterprise NCC-1701 and tell me if you could do any better.  As far as I’m concerned, Vic nails it.

So regardless of everything else I am about to say in this blog editorial, let me state for the record that I am a big fan of Vic Mignogna and a HUGE fan of (and proud donor to) Star Trek Continues.

And with that, it’s time for Jonathan to jump into the volcano…

A few weeks ago, a short snippet of an interview with Vic Mignogna was posted to YouTube.  In answering the question of why there were only three more episodes of Star Trek Continues, he began his answer like this…

CBS has always been very, very gracious to fan films, allowing them to exist and share their love of Star Trek…under one very clear condition.  And that is you’re not allowed to profit personally.  You’re not allowed to make money from somebody else’s property.  And everybody pretty much understands that…makes sense.

But a couple of years ago, another production came along, and they raised a lot of money under the guise of planning to make a Star Trek feature film.  And not only was the film never made, but they profited personally off of it.  The paid themselves salaries.  They rented a building that they were planning to rent out to other productions for profit, and flew around the world promoting a movie that didn’t exist, and just spent the money on other things besides that which the fans gave it.

And when that line was crossed after all these years and many productions, CBS basically said, “Y’know what?  Enough is enough.  We’ve gotta step in here and protect our license.”  And so they filed a lawsuit against that production.  And what came out of that lawsuit were some fan film guidelines.

Now, this isn’t the first time Vic Mignogna has recited this mantra.  He’s done many interviews telling this same story.  But I think the time has come for someone to finally say to Vic: you can’t have it both ways, dude!  Captains who live in glass starships shouldn’t hurl stone knives (or something like that).

I’m NOT saying that STC set out to make a profit.  Heavens no!  What I’m referring to is Vic’s very first sentence: “…allowing them to exist and share their love of Star Trek…under one very clear condition.”  Of course, now there are TEN conditions (actually fifteen, since one of the conditions contains six parts), and STC has chosen to release four episodes which go against at least FIVE of those conditions.

Contrary to what some people claim or have heard, NONE of these four episodes being released this year was in any kind of production prior to the fan film guidelines being announced by CBS and Paramount in June of last year. Only the crowd-funding campaign itself (which raised about $200K) was completed before the guidelines came out.  Aside from that, there is no “grandfather clause” that would apply to these four episodes.

So when Star Trek Continues decided to complete their final episodes, they were also choosing, with full knowledge, NOT to follow these five specific guidelines that had already been announced:

Keep in mind, I do NOT have a problem with any of the above!  More power to ’em!!!  You know I’m not the biggest fan of the guidelines, and I believe that Guideline #5 (the one about not paying anyone and not allowing Star Trek veterans) violates California labor law.  And the SMALL ACCESS protest campaign is trying to convince CBS to revise the “no ongoing series” guideline.  So I am NOT saying that STC needs to change anything about what they’re doing with their fan series.

And in fact, the folks at STC have pointed out that these guidelines are simply that: guidelines.  They are not “rules” or “laws” that, if violated, automatically get a fan production sued.  Any fan series is welcome to produce whatever they want to, and CBS and Paramount are welcome to take action or not take action as they see fit.

And yet, that same argument that Vic Mignogna is using in 2017 could just as easily have been used by Alec Peters in 2015!

In 2015 (and prior to that), the only “condition” that CBS and Paramount had was: “You can’t make a profit from your fan film.”  And if you’ll recall, that “condition” was never officially put in writing or even spoken aloud by anyone at either studio.  Fan producers ASSUMED it, but it was more of a “don’t ask, don’t tell” relationship.

In the case of the fan film guidelines, those ARE in writing, and quite clearly stated.  So while Alec Peters may allegedly have knowing violated a condition that wasn’t written down (don’t make a profit), STC is knowingly violating FIVE conditions that are written down.

I can already hear some of you typing, “But STC has a really good relationship with CBS and Paramount and has been talking to them all along” (according to some accounts).  Well, again, so was Alec Peters.  According to filings in last years lawsuit, it was confirmed by the studios that Alec met face-to-face with CBS and Paramount executives no less than FOUR times in 2014 and 2015, and they never said, “Hey, stop, don’t do this.”  Instead, they said, “We can’t tell you what you are and aren’t allowed to do, but we’ll let you know if you cross over a line.”  And they ultimately did…with a lawsuit!  (And before anyone starts mentioning that 2015 article in The Wrap, an anonymous media quote from an unnamed source is obviously trumped by an in-person conversation with actual studio executives.)

I suppose you can also argue that STC has always shown great respect for Star Trek and CBS’s ownership of it while some have claimed that Alec Peters made grandiose statements about how Axanar was the Star Trek that fans wanted to see and other such arguably controversial comments.  But it should be noted that each Axanar crowd-funding campaign stipulated, “Star Trek is a licensed property of CBS and so they have the final say in any Star Trek venture.”

And ultimately, Alec wasn’t sued for making grandiose statements…but I do understand the argument.  However, CBS spent a good deal of time composing those guidelines (or so I have been told by someone who was involved in the process).  For a fan production to release four fan films that blatantly ignore not just one but multiple guidelines…that takes chutzpah.  And it does put the studios into an awkward position.  If they try to shut down STC (which is already shutting down after these final episodes), then CBS and Paramount just look like bullies again.  But if they do nothing, they they risk strengthening a potential non-willful infringement defense (just like Axanar used) if there ever is another copyright lawsuit somewhere down the line.  So in that way, both Axanar and STC kind of thumb their noses at the studios…STC just does it more politely.

Now, it’s possible that CBS and Paramount will simply look the other way and do nothing as STC finishes up over the next few months.  It’s also possible that the studios might decide afterwards to put the kibosh on all fan films and say, “Y’know what?  Enough is enough.  We’ve gotta step in here and protect our license…again!”

There’s no way to know which outcome will happen…just as there was no way for Alec Peters to know in 2014 and 2015 what repercussions his decisions and actions would have in 2016.

Look, it’s not like I want Star Trek Continues to do anything other than what they’re planning to do: release three more full-length episodes between now and October and hope for the best.  I’m very excited to see John de Lancie guest starring in the next one…and I’m curious to see if there are any other surprise guest stars lined up for the final two episodes.  (I suspect there will be.)

No, my issue is much simpler than that: I hate hypocrisy. As I said, I love Vic Mignogna, but I can’t stand that he’s pretty much trying to live by a double standard.  Vic crucifies Alec Peters for knowingly and willingly ignoring the one “condition” that CBS and Paramount had about fan films…and yet here Vic is, knowingly and willingly ignoring five of the “conditions” that CBS and Paramount now have about fan films.

I think it’s fine that STC is choosing to break those rules and see what happens.  But Vic can’t have it both ways.  If it’s good for the goose now, then it was good for the gander two years ago.

If Vic Mignogna wants to do interviews and bask in some well-deserved glory before the fans, then I say go for it.  You’ve more than earned it, man!  But it’s time to stop making the accusations against Alec and Axanar.  Especially with the John de Lancie announcement this past week, this is absolutely a pot/kettle situation—and Vic just needs to own the fact that he’s choosing to ignore those clearly-started conditions…so stop complaining by saying that Alec did the same thing two years ago.

You may now start posting your angry comments.