It’s been a while since I wrote a biography blog…nearly a year and a half, in fact! I’d started out thinking I’d write these regularly, as I’ve had some interesting adventures as a fan: sneaking onto the Voyager and DS9 sets at Paramount, writing the Star Trek reference book Starship Spotter in just 18 days, directing Majel Barrett Roddenberry doing voice-over for four hours…in her living room! The list goes on.

But then I got busy writing about fan films, and suddenly it’s 17 months later with no second entry to follow up on the “to be continued…” that ended my first biography blog. Time to fix that! (I’m even adding a new tab to the main menu that says “BIOGRAPHY” in the hope it’ll inspire me to write more of these entries before another 17 months go by.)

When last we left off, it was December of 1993, and I’d just turned down a job working for MICHAEL OKUDA in the Star Trek Art Department! (Was I nuts???? Read my first biography blog to find out why.)

So instead of doing graphics and animations for DS9, Voyager, and Generations, I stayed with my brother David and grew our fledgling multimedia company, 2-Lane Media, Inc. Over the next two and a half years, we expanded to about a dozen employees doing websites for clients like Disney, Nestlé, Transamerica, and Tenet Healthcare.

But in 1996, we added a new client that would change my Star Trek life forever…

2-Lane Media wasn’t a game developer. Instead, we were hired by Interplay to design and build their marketing website. We would have thought they would have hired a Website Design Toronto to do the work, but no, they turned to us. It was a great surprise! And as the resident Trekkie of the company, I took the assignment of writing the proposal to be approved by Viacom Consumer Products (Paramount’s licensing division). Yep, even a marketing website for a Star Trek product needed to be approved by licensing! 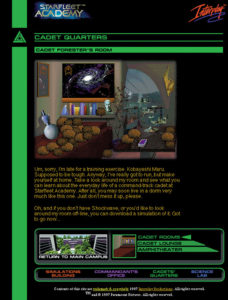 I actually included some really fun Easter eggs for visitors to click on (anyone remember Shockwave?—it predated Flash as a plug-in for web browsers). For example, in the image to the right, the following things would happen if clicked on…

The challenge with writing the proposal was is figuring out how to get all of these ideas approved. After all, I had no idea if the folks in licensing were obsessive Star Trek experts like myself or normal people with no clue what a cloaking device was or why a weird bird would suddenly appear over a picture of the galaxy.

I decided to err on the side of caution and not assume the person(s) reading my proposal knew anything about the show. I explained every inside joke: “The reason for the red jack playing card is because, in the second season Star Trek episode ‘Wolf in the Fold,’ the Enterprise is invaded by the spirit of Jack the Ripper…otherwise known as Redjac or ‘red jack.’ The sound byte would be sampled from that episode.”

Yep, I was that specific! At worst, they’d skim over what I wrote. At best, this could be the difference between getting rejected versus approved.

It turns out my reader was, indeed, a Star Trek “novice.” Hired just seven months earlier with little-to-no Trek knowledge, Juliet had been taking home two episodes each night to watch with her husband on their VCR before bed. But by 1996, there were already well over 350 hour-long episodes and seven movies! Poor Juliet was being tasked with approving Star Trek CD-ROM games and had no idea how to tell an Andorian from a Tellarite!

Juliet approved my proposal, and appreciated the fact that I wrote it in English and not in “Trekkie.” She could tell that I knew Star Trek backwards and forwards but that I also understood the business world enough to write a coherent proposal.

“Jonathan, I was wondering if you’d like to work as a consultant for me on a freelance basis,” she said to me over the phone, quite unexpectedly! “I’d send you CD-ROM game proposals to read, and then you would tell me if they were consistent with canon or if they needed changes. We can’t afford to pay you much, only $20 per hour. But it would be such a help for me.”

“I’d love to!” I responded as calmly as I could manage. But seriously, I wasn’t going to turn down an offer to work professionally on Star Trek a SECOND time!!! I am not that nuts!

So here I was finally working for Paramount Pictures—perhaps not on the Star Trek set itself, but this was closer than most fan get, right?

And my adventure was only just beginning!

To be continued (hopefully soon)….