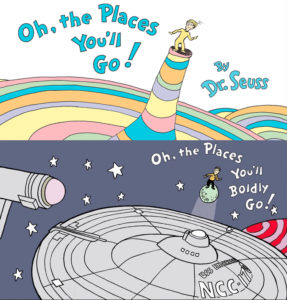 Last time, we began looking at the intriguing case of the Dr. Seuss/Star Trek “mash-up” book Oh, the Places You’ll Boldly Go! by DAVID GERROLD and TY TEMPLETON.  Last November, they got sued by Dr. Seuss Enterprises for copyright infringement, trademark infringement, and unfair competition.  The defense quickly filed a motion to dismiss the case.  After a brief extension, the judge issued a ruling last month.  (For more details, read yesterday’s blog.)

The motion to dismiss centered around the “mash-up” being protected as “fair use.”  And while judges do not usually rule on fair use this early in a case, the Honorable Janis L. Sammartino of the 9th Circuit Federal Court did (again for reasons explained in yesterday’s blog).

So did the fair use defense work or not?  What did the judge say???

In short, it’s a tie.  She called it a “near-perfect balancing of the factors” of fair use.  And what does that mean?  Get comfy, folks, ’cause Jonny’s gonna do his best to break this down into layperson’s English for you all…

Congress determined four factors that should be weighed by a judge and/or jury when there’s a question of fair use (and I quote):

Let’s take these four factors one at a time…

#1 goes in favor of the defendants

Although the description above implies that “commercial nature” is part of the consideration of the first factor, the law allows for that aspect to be somewhat ignored or minimized if the new work is transformative enough from the original.  (Remember that wonderful word “transformative” from the Axanar case?  You could almost turn it into a drinking game: take a shot every time you see the word “transformative” in a legal filing!)

Anyway, here’s what the judge had to say on the transformative nature of the mash-up:

…although Boldly fails to qualify as a parody it is no doubt transformative. In particular, it combines into a completely unique work the two disparate worlds of Dr. Seuss and Star Trek. Go! tells the tale of a young boy setting out on adventure and discovering and confronting many strange beings and circumstances along his path. Boldly tells the tale of the similarly strange beings and circumstances encountered during the voyages of the Star Trek Enterprise, and it does so through Go!’s communicative style and method. Go!’s rhyming lines and striking images, as well as other Dr. Seuss works, are often copied by Boldly, but the copied elements are always interspersed with original writing and illustrations that transform Go!’s pages into repurposed, Star-Trek–centric ones.

Given the foregoing, and on balance, this factor weighs in favor of finding Defendants’ use to be fair.

#2 goes in favor of the plaintiffs…but barely

Some of you might remember me talking about the memoirs of former President Gerald R. Ford.  Before his publisher could release Ford’s autobiography, a magazine that hadn’t been given permission by the author or publisher printed excerpts from the book…specifically the part about why Ford pardoned Richard Nixon.  With that no longer a “surprise,” way fewer people would be all that interested in purchasing and reading Ford’s memoirs.  A deal with Time magazine (which had been offered an exclusive) fell through, and money was lost because of the unapproved early public release of portions of the book.

In Ford’s case, the original work was unpublished and, therefore, the early unapproved release significantly damaged the author and publisher.  Despite the defense that Ford was a public figure and the memoirs should be considered “news” in the public interest, the defendant lost and Ford’s publisher received a damages award of $12,500.

In the case of Dr. Seuss, however, while a creative work of literature is almost always considered deserving of copyright protection (the nature of the work), the fact is that—at this point—the books by Dr. Seuss area pretty well-established.  A Trekkie mash-up book is probably not going to hurt the Dr. Seuss “empire” as much as the too-early release of Ford’s memoirs did.

Because in the present case Dr. Seuss published Go! several decades ago—and indeed “Dr. Seuss books have topped many bestseller lists, sold over 650 million copies worldwide, and been translated into more than a dozen languages, this factor as a whole . . . weighs only slightly in [Plaintiff’s] favor.”

So technically a “point” for the plaintiff, but only a very small one.

#3 does not weigh against the defendants

Okay, so you copied something.  But how much did you copy?  If you copied it all, then that could be a problem.  But if you copied only what you needed, the bare minimum that was necessary to create your new and transformative work—even if it was a LOT of copying—then you might qualify for fair use.  But how much is too much?  It’s almost always an arbitrary judgment, but here’s what Judge Sammartino had to say:

In the present case, there is no dispute that Boldly copies many aspects of Go!’s and other Dr. Seuss illustrations. However Boldly does not copy them in their entirety; each is infused with new meaning and additional illustrations that reframe the Seuss images from a unique Star-Trek viewpoint. Nor does Boldly copy more than is necessary to accomplish its transformative purpose.

This conclusion wasn’t reached haphazardly either.  The judge actually broke down in detail one of the illustrations: 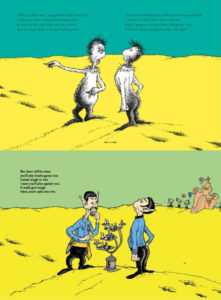 Plaintiff’s work depicts two similar-looking, fanciful “Zax” creatures arguing in the middle of a desert, with footprints to mark their arrival. Boldly takes the same desert landscape and footprints, and in the fanciful creatures’ place puts two similar-looking beings of seemingly Vulcan descent—one of which is drawn in the same position as his Dr. Seuss counterpart and one of which is transformed from the Dr. Seuss creatures’ aggressive stance into a contemplative pose—deep in the midst of playing some type of alien board game. Boldly also adds similar-looking children playing in the background near a slide-like structure and a green, rather than Go!’s deep blue, sky. Additionally, Boldly’s text reveals that the two Vulcan creatures are, in fact, the same person, unlike Go!’s distinct “North-Going” and “South-Going” Zaxes. Boldly therefore transforms the argumentative Zaxes and their corresponding depiction into a cloned Vulcan matching wits with himself over an alien boardgame. One Vulcan is positioned almost identically to his Zax counterpart to “conjure up” the Dr. Seuss work, while the other Vulcan is drawn anew and a board-game added in order to fully accomplish the work’s overall transformative purpose.

#4 weighs in favor of the plaintiff…at least for now

The whole reason for the lawsuit was that Dr. Seuss Enterprises claimed that the mere existence of the mash-up threatens its licensing opportunities.  Y’see, not only do they own the rights to publish and sell the many works of Dr. Seuss, they also license the characters to new authors as well as to merchandisers, theme parks, etc.  If potential licensees see this mash-up getting away with not licensing through the Dr. Seuss Enterprises, that’s possibly lost revenue.  And if the “trick” to getting around the need to pay a license is simply to do a “mash-up,” who’s to stop a future book like The Cat in the Batcave or How Cruella Deville Stole Christmas?

(Oh, snap.  I just pissed off two major Hollywood Studios…one of which is Disney!!!)

The judge was sensitive to the conundrum of the “mash-up” (more on that next time), but for the moment, the question remained for factor #4—will Oh, the Places You’ll Boldly Go! have a negative impact on the plaintiff’s business?

The judge was realistic about the potential of the mash-up “hurting” the plaintiff’s sales.  After all, the mash-up targets a different audience…and one that is likely to have already purchased many of Dr. Seuss’ books anyway:

…this presumed harm is neutralized somewhat by the fact that Boldly does not substitute for the original and serves a different market function than Go!. (“A transformative work is less likely to have an adverse impact on the market of the original than a work that merely supersedes the copyrighted work.”). Indeed, Boldly’s market relies on consumers who have already read and greatly appreciated Go! and Dr. Seuss’s other works, and who simultaneously have a strong working knowledge of the Star Trek series. It is therefore unlikely that Boldly would severely impact the market for Dr. Seuss’s works.

However, at this early stage, the judge must, by law, accept the claims of the plaintiff as true and assume that there could or will be some kind of potential revenue impact from lost licensing opportunities.

As it stands in this case, factors one and four—which “have ‘dominated the case law’ and are generally viewed as the most important factors,”—currently stand in equipoise. Factor two weighs slightly in favor of Plaintiff, and factor three is neutral. And although it would appear that the purposes of copyright favor Defendants, that determination is also a close and unsettled call.

Ultimately, given the procedural posture of this motion and near-perfect balancing of the factors, the Court DENIES Defendants’ Motion to Dismiss. Specifically, without relevant evidence regarding factor four the Court concludes that Defendants’ fair use defense currently fails as a matter of law.

In other words, winning this case is going to come down to factor #4!  Is this mash-up with Dr. Seuss and Star Trek going to financially harm Dr. Seuss Enterprises?  If the plaintiffs can prove real potential damages, then they might actually win this case.  If not, the judge seems to be leaning towards the defendant…at least at the moment.

Here is a copy of the Judge’s initial order on dismissal , if you’re interested in reading it.

Come back tomorrow for the conclusion of this deep dive into the exciting world of Star Trek, Dr. Seuss, and intellectual property law.  Why were the trademark and unfair competition claims dismissed?  What did the plaintiffs put into the amended filing, and what’s in the NEW Motion to Dismiss?  And…is it likely to work?

4 thoughts on “DR. SEUSS/STAR TREK: A “near-perfect balancing” of FAIR USE factors! (Part 2)”