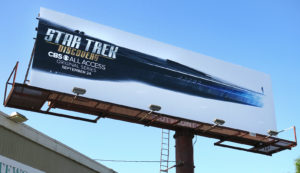 In yesterday’s blog, while many Star Trek fans are debating uniforms, starships, bridge lighting, hairless Klingons, and adopted human sisters, I decided to look at a much more fundamental question regarding the new Star Trek: Discovery television series.  Was it a good or bad business decision by CBS to make the new show available (at least in the U.S) exclusively via subscription to their ALL ACCESS streaming service?

We already looked at CBS’s decision to target the series to a younger audience, based on a statement made be CBS President and CEO Les Moonves back in May.  This means that the older, more loyal Star Trek fans, “yesterday’s fan-base” as I call them, aren’t the primary target…which is kinda why Discovery isn’t sweating the details in hewing to established Star Trek canon.

Instead, CBS is focusing their attention and hopes on younger viewers who are more likely to subscribe to a brand new streaming video on demand (SVOD) service than the older fans.

Ah, but therein lies the rub!

These younger viewers don’t have an existing, decades-long relationship with Star Trek.  They weren’t watching TOS when it first aired in the 1960s or grew up with it in the 1970s.  They didn’t even watch TNG in the 1980s and 1990s as kids.  All those folks are already pushing 40 (or 50 or 60 or 70!)  CBS is targeting viewers in their 30s or even 20s.  By the time these younger viewers were old enough to watch Star Trek, the ratings for the show had already plummeted and few people were watching at all.

In other words, the vast majority of these young viewers aren’t really Star Trek “fans.”  To them, Discovery is more like a new science fiction show based on an old series that their parents or grandparents used to watch…except this version has cool sets, dazzling VFX, action, adventure, and a TV-MA rating.  And there’s nothing inherently wrong with that.  I don’t fault CBS for choosing to make the new series young and hip.

But they made another choice to put the new series exclusively on the ALL ACCESS subscription service here in the U.S.  And today, I want to look at some of the consequences of that decision—not from the perspective of an angry fan (which I’m not; I actually want the new series to succeed), but as a business analyst.

If you subscribe to, say, Netflix, you’ve got a seemingly endless parade of nearly any genre of filmed entertainment: action, comedy, drama, romance, horror, sci-fi, children’s programming…just to name a few.  But despite the long list of TV series and specials that ALL ACCESS provides, CBS is still limited in what they have to offer—pretty much only shows from their own “vault.”

Remember that, by targeting the younger viewer, CBS is trying to attract a “fan” who is NOT really a Star Trek fan yet (since we tend to skew older).  So who is this viewer?  For me, it’s really simple:

After all, Discovery is a science fiction show.  My non-geek, lawyer wife isn’t going to watch Discovery—she’ll be more attracted to the legal drama and sexual eye-candy of The Good Fight (CBS ALL ACCESS’ only other original programming at the moment).  That show’s targeted viewership skews mainly female, and many aren’t really sci-fi fans, so they probably aren’t going to cross-pollinate into Discovery…despite the lead character on the new Trek series being a female.  (Yeah, that casting decision wasn’t an accident, folks.)

So in order to create an audience for Star Trek: Discovery, CBS has to rely on attracting younger sci-fi fans who don’t have a pre-existing connection with or loyalty to Star Trek.  But does ALL ACCESS really give these viewers their money’s worth with what it has to offer?

ALL ACCESS offers classic television like I Love Lucy, Perry Mason, and The Brady Bunch.  It offers Frasier, Cheers, Wings, and many other comedies and dramas.  In other words, it offers a bunch of stuff that’s available elsewhere and people watch when there’s nothing else on TV.  You flip through channels, find an episode of Taxi you don’t remember, and you veg out and watch it.  This isn’t really a “valuable” offering for ALL ACCESS.

The NFL?  Maybe.  I like football.  Of course, I usually watch it on Sundays anyway.  It’s not like I can get it ONLY from ALL ACCESS.  The Emmys, Tonys, and Grammys?  I can watch those on regular broadcast TV and don’t really feel like enduring them again years later.  60 minutes and Face the Nation from years or decades ago?  Not unless I’m writing a term paper for a political science course!

Instead of looking at everything ALL ACCESS has to offer, let’s look at what the target sci-fi fan wants to actually see…in other words: science fiction.  What does ALL ACCESS have to offer in that category? 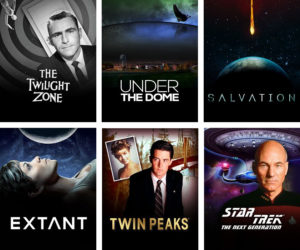 There’s 156 episodes of The Twilight Zone plus all the older Star Trek series (which are also on Netflix).  Beyond that, however…um, not much.  The short-lived Halle Berry series Extant is up there, plus Under the Dome, the original Twin Peaks, and Salvation…none of which are really “pure” sci-fi.

So if you’re a young science fiction fan in the U.S. thinking of “cutting the cord”…then you’re subscribing to ALL ACCESS mainly for Discovery (and maybe The Big Bang Theory).  And will that be enough to justify your $6 or $10/month?

CBS thinks so.  I don’t.  Soon enough we’ll find out who was right.

One Episode, One Chance…

Some shows are a hit from day one.  Others take time to build an audience.  The Big Bang Theory didn’t start off as CBS’s number one show.  But after a few seasons, word began to spread, and more and more people tuned in.

Building an audience through good word-of-mouth will be more of a challenge for Star Trek: Discovery.  Even if it generates lots of positive buzz, people can’t just change the channel or set a DVR timer and check it out later.

Of course, if someone from CBS were here in my home at the moment, they’d surely say, “Okay, Mr. Smarty-pants!  What about House of Cards?  That was a show exclusive to Netflix, and it still built an audience over time!”  True, but much of that audience was already subscribed to Netflix, and all they needed to do was click on “House of Cards” and start watching it.  And later, when the show was a hit at the Emmys, more people subscribed not only to check out this hot new series but also because of everything else that Netflix had to offer.

As I said, CBS doesn’t have nearly as much to offer.  It’s not that ALL ACCESS has nothing.  It’s just that Netflix has SO much more…nearly every genre you can name.  For some people, House of Cards was the last piece of the puzzle in convincing them to finally take the plunge and subscribe to Netflix.  Star Trek: Discovery pretty much has to be the entire puzzle for a potential subscriber…and that’s asking a LOT.

The other challenge is that Discovery has just one realistic chance to be “awesome.”  Unlike Netflix, which already had 44 million subscribers when House of Cards debuted—and those were the people who spread the word—ALL ACCESS only has a reported 2 million subscribers at present (possibly less; they don’t exactly shout the number from the rooftops).  So the only opportunity that Star Trek: Discovery has to be watched by 10 or 20 million people and impress them is when its first episode airs for “free” after NFL Football on Sunday, September 24 on CBS.  If that first episode doesn’t blow people away, I’m not exactly sure there’s much of a second chance for a mass amount of people to see it…at least not in America.

Outside of the U.S. and Canada, Discovery will be available on Netflix, which does have many more subscribers than ALL ACCESS.  So they might end up being the word-of-mouth.  But it’s unclear whether a show that’s popular everywhere except America is going to also attract American audiences.  And of course, that all presupposes that Discovery is a hit internationally…which is far from a guarantee.

And there’s A LOT Of Competition!

The last point I want to hit is the fact that Discovery not only has to overcome a lack of breadth and depth of the CBS offerings on ALL ACCESS, plus a limited potential for word-of-mouth growth, but the new series is also facing off against quite a staggering amount of quality TV science fiction that is carried on regular network and cable television.  Among the sci-fi and genre shows that do NOT require a special subscription are The Expanse, Doctor Who, all the stuff on the CW, The Walking Dead, Gotham, Lucifer, Preacher, the soon-to-debut The Orville and The Gifted…just to name a tiny few.  And if you already subscribe to Netflix or HBO or STARZ, then you’ve got the Marvel shows, Game of Thrones, Westworld, American Gods, and a veritable all-you-can-watch buffet of other genre offerings.

Is Discovery just another brick in an ever-growing wall of quality sci-fi offerings?  If so, then why pay a $6 or $10 monthly subscription to watch it when so much other great stuff is so readily available?

Already, I’ve seen a number of comments from the younger generation saying, “Oh, man, not ANOTHER subscription!”  Many viewers (young and old) are already paying for Netflix, HBO, and possibly one or two other premium services.  If you’re a sci-fi fan, Netflix and HBO make sense to have.  But does ALL ACCESS?

And remember that Netflix releases its content in season-long batches all at once.  Not only is ALL ACCESS not doing that, but the 15 episodes of Discovery won’t even air over a continuous span of 15 consecutive weeks.  So a Discovery viewer will either have to subscribe for at least 5 or 6 straight months, or start and stop and then restart their subscription, or simply wait for the first season to complete before subscribing for one month, binge-watching the season, and then canceling.  Only the first option makes any decent revenue for CBS.

In the end, I believe CBS and the other networks (possibly with the exception of Disney) are simply getting into the game too late.  They want to be “the next Netflix” at almost the same price point while offering significantly less content for the typical young (and restless?) sci-fi viewer.  And add to that the fact that $6/month still gets you 12 minutes of commercials per HOUR!!!  (Yeah, still scratching my head over that one.)

So while, in my heart of hearts, I do sincerely want Star Trek: Discovery to succeed, I just think CBS has painted themselves into a Kobayshi Maru no-win scenario for their new series by putting it on ALL ACCESS.

And that’s pretty much the point of this editorial.  If I’m wrong, great.  CBS won’t care what I say.  But if Discovery fails to bring in 2 million new subscribers, there will potentially be an argument made by CBS that Star Trek‘s popularity has simply run its course.  I want an alternative narrative circulating out there that maybe it wasn’t that Star Trek is finally dead as a franchise but rather that CBS set the new series up for an inevitable failure by placing it on ALL ACCESS.

36 thoughts on “Did CBS doom STAR TREK: DISCOVERY by putting it on ALL ACCESS? (editorial, part 2)”