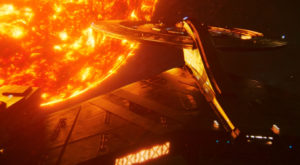 Captain’s blog, supplemental.  While I’m going to try to keep this follow-up review less spoiler-y than my last one, a few minor spoilers might creep in.  Consider this your official warning.

My STAR TREK: DISCOVERY review from last Thursday certainly hit a lot of nerves, but it also gave a lot of people an incorrect impression that I didn’t like the new series and that I wanted CBS to fail.  What I actually said was that I didn’t feel like Discovery was “my” Star Trek—the Star Trek that I have held in my heart for these past five decades.

And yes, when it comes to imagining what a war with the Klingons would have looked like a decade or two before Kirk, my “head canon” will remain with Axanar, and I’ll think of Discovery as some kind of alternate universe like the JJ Abrams movies.

But that doesn’t mean that think Discovery is a bad show or that I won’t be watching it.  In fact, last night at a friend’s home, I had a chance to see the third episode of the new series, “Context Is for Kings.”

So, is Discovery STILL not “my” Star Trek…or did they manage to change my mind?

I’m going to delay answering that question for just a moment.  First, I want to say that the producers, writers, directors, actors, and the entire production crew are giving their ALL to this new series.  Nobody is sleeping on the job.  The show looks amazing, sounds amazing, and has the kind of production value that’s necessary in order to get noticed in today’s media environment. 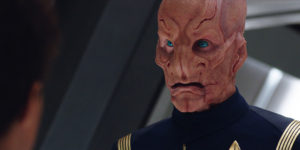 And as such, I truly enjoyed watching the third episode.  While I thought the first two episodes were also well-produced and well-acted (except for those poor Klingon actors who probably felt like they were at war with their make-up and costumes rather than with Starfleet!), the third episode was a HUGE step up.  It flowed better.  I was able to get a more solid feel for the characters, and some were actually pretty darn intriguing!  The idea of a “special needs” officer on the autism scale is gutsy…perhaps annoying to some but relatable to others (especially some parents out there hoping their child will grow up with opportunities to fit in and excel).

But it’s still not “my” Star Trek.

It’s not just the uniforms or the ship designs or the funky Klingon make-up.  It’s not simply that Discovery LOOKS different than what’s come before, it FEELS different.  And I think I’ve figured out why…

Starfleet crews are teams that work together.  Sure, there can be frictions—like Bashir and O’Brien in the beginning of Ds9 or the Maquis crew on Voyager.  T’Pol started out with issues, and Lt. Reed often found it tough to fit in.  But in the end (and even in the beginning), you never felt like these people were antagonistic to each other.  Folks even tried to be nice to Reg Barclay!

Star Trek crews felt like people I could look up to.  The human race had finally evolved past so much of the pettiness and self-importance that people in today’s world seem to suffer from.  Although Twitter and Facebook didn’t exist yet for the majority of the various Star Trek series, you kinda got the feeling that there weren’t flame wars and trolling in the 23rd and 24th centuries.

I don’t get that feeling from Star Trek: Discovery.  I can totally picture this crew having all sorts of dysfunctional issues.  If fact, I don’t have to imagine it; I saw it! 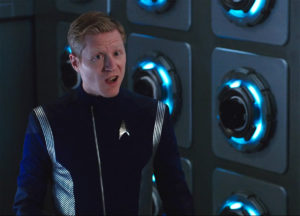 So I get it, Lt. Stamets is stuck up and bitchy.  McCoy was often bitchy, too.  But he was never a passive-aggressive dick to the captain or to any crewman!  Security officers would immediately do their jobs in breaking up fights, especially if someone were getting the shat beaten out of her…or him.  A security chief wouldn’t just stand back, hold her men back, and just watch to see who won.  Such an officer would be up on report or even booted off the ship.

Of course, first officers don’t mutiny against their captains by rendering them unconscious either, and that’s kind of the nexus of this whole series. That said, while I understand Burnham getting the cold shoulder for being a mutineer, I don’t understand why everyone keeps blaming her for starting the war.  The mutiny failed, and the Klingons still fired first!  The admiral came to clean up the mess and got killed for his trouble…with Burnham already in the brig and out of the  picture by the time the shooting war started.  As for getting her captain killed, it was Georgiou’s order to board the Klingon flagship, not Burnham’s.  Mutineer?  Sure.  War-starter?  That’s just fake news! 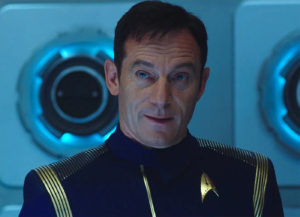 But back to the Discovery crew.  To me, the first duty of every Starfleet officer is to the truth.  Why does it feel like Captain Lorca is hiding a lot?  I suppose that keeping the truth to oneself isn’t technically lying, but it’s not really inspiring me in the ways that Kirk and Picard used to.  So no, this show doesn’t give me that same uplifting feeling that Star Trek has for the last 50 years.

So why do I like Discovery at all then?

Because it’s a good show…especially this third episode.  It shows promise.  I was entertained.  I want to watch more and learn more.  I won’t hold it against the writers that they made the choices they did because, in the end, I enjoyed the final result. 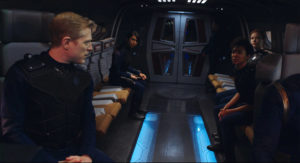 The characters might not be the paragons that I so admired in previous Star Treks, but they are intriguing and compelling nevertheless.  They are defined (so far) by both their strengths AND their weaknesses.  Sure, Michael Burnham might be mopey and arrogant, but she’s also incredibly bright and intuitive (and not afraid to be proactive and often sneaky).  Tilly might have punk’d Burnham with the “there’s assigned seats” comment (notice there weren’t actually seats, everyone stood at their station), but then she opened up later to Burnham with an honest apology.  Saru might have landed that zinger about protecting his captain better than Burnham protected hers, but he’s showing the first signs of possibly forgiving Burnham someday.  And if he can reach that point, then both characters will grow and develop.

In fact, each of the characters seems to have their own path to walk down in this series, and the viewers will get to watch these people evolve.  With luck, by the end of the season, most of them will no longer be such dicks (well, maybe Stamets will still be a dick, that barnacle seems pretty well stuck to the boat)!

This is a modern-day sci-fi show for the new golden age of television–dark, edgy, full of mystery.  If it didn’t have the words “Star Trek” on it, I’d probably enjoy it completely (except for those three minute long subtitle scenes spoken entirely in Klingon!).  I’d most likely think the show was fresh, complex, engaging…with characters showing a rawness reminiscent of the rebooted Battlestar Galactica, brought about by the emotional stresses and devastating losses of war.  Without the words “Star Trek,” I doubt I would mind the uniforms, the too-dark lighting, or even those gosh darn lens flares!

The problem is that they ARE calling it “Star Trek.”  And as a long-time fan, I’m having trouble reconciling this new series in my mind with the well-established history of the show…even though Discovery really is quite good.

Yes, Star Trek is a rich, expansive tapestry upon which can be painted an infinite number of interlocking masterpieces.  That’s why fan fiction and fan films can work so well, even if some efforts are the equivalent of crayon scribbles next to baroque masters.  (Who says “If it ain’t baroque, don’t fix it”?)  Star Trek is a big enough universe to hold the inspiration of the many, not just the few. 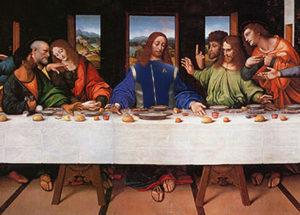 But watch out when you’re painting that you don’t paint OVER other parts of the canvas!  Changing the colors of the robes that Jesus is wearing in The Last Supper might seem cool and modern, but you’re also erasing a lot of history.

The reason that Star Trek was able to “leap” forward into the new look and feel of The Motion Picture or The Next Generation was because they did, after all, leap FORWARD.  These were still the same characters, or in the case of TNG, the same kind of brave and noble Starfleet officers, regardless of the era.  The news Treks were expanding the canvas, not painting over it.

And when J.J. Abrams decided that he DID need to paint over parts of the existing canvas, he went and started another canvas!  Alternate timeline, parallel universe…call it what you will.  The original canvas was still there.

One of my readers says he watches Discovery and thinks of the show as being set in future of Star Trek (like 25th century), and then the show works without bothering him.  The only problem with that for me is all those darn mentions of Sarek and Amanda!  They’ve locked the series to a fixed point in Trek history.  So all that leaves me is alternate reality.

Therefore, as I continue watching the series, and I will (hopefully enjoying it as much as I did episode 3), I’ll just keep imagining that I’m glancing into a parallel universe, like the mirror universe… except where those people were evil, these people on the Discovery are just passive-aggressive, bitchy little dicks to one another.

And hopefully they’ll grow out of it.

91 thoughts on “My real problem with DISCOVERY – the ship is full of D*CKS! (editorial / supplemental review)”