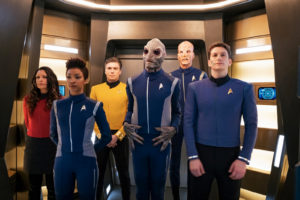 Okay, San Diego Comic Con 2018 is now in the history books, and nearly every Trekker is now talking about Season Two of STAR TREK: DISCOVERY.

Fans now know that, in addition to Anson Mount playing Captain Christopher Pike, Rebecca Romijn (who played the shape-shifting Mystique in the early X-Men films) will play Number One, and yes, we will be seeing Spock at some point this season.  Other new characters, like Tig Notaro as Chief Engineer Reno, are also being added (not sure as regulars or guests stars), plus at least one actor whose character died during Season One will be returning in some undisclosed way.

In addition to the debut of Season Two of Discovery sometime in early 2019, four “Short Treks” (about 10-15 minutes each) will tell stories focusing on the histories of established characters like Tilly and Saru plus a new character named Craft, and a fourth featuring Harry Mudd (played by Rainn Wilson, who will also direct his mini-episode).  Reportedly, one of these four shorts will be released each month leading up to the January premiere of Season Two.  Whether these “Short Treks” will be exclusive to CBS All Access (and Netflix outside of America and Canada) or posted for free on the Internet has not been made clear yet.  Personally, I think they should be posted publicly to draw in more viewers to the subscription service…but what do I know?

(Side/snide note – for any fan filmmaker who’s been complaining, “You can’t tell a decent Star Trek story in less than 15 minutes…” well, CBS is about to either prove you right or wrong.  Stay tuned!)

But by far, the most excitement came from this intriguing Season Two trailer.  And for the 1% of you out there who haven’t seen it yet, here ’tis…

Not bad, huh?  But there was something oddly familiar about it…

At first, I couldn’t put my finger on it.  I was dazzled by Anson Mount as Pike and seeing more traditional Starfleet uniforms that didn’t look like something Elvis Presley would say were just too shiny to wear, baby.  Granted, I did think to myself, “What’s with all these spinning ships???” and did a quick Rorschach test with this freeze-frame image…

But for the most part, I was more than just cautiously optimistic; I was downright excited!  Sure, I might end up with some of the same complaints and frustrations that I had during the first season of Discovery, but I’m not being pessimistic about it.  Just the opposite, in fact.

What a difference a year and a season makes, huh?  Back then, yeah, I was not only cautiously optimistic, I was even a bit worried.  But now I’m excited.  And it’s not just because I know Spock is coming or I’m looking forward to seeing the Enterprise and uniforms that aren’t all that same drab blue color.

I’m excited because I saw something I’d been complaining was all-but-missing during Season 1: BANTER!  Hooray for banter!!!

And it wasn’t just that the trailer was edited to be funny.  In order to include the humor, you first have to HAVE the humor.  Season One of Discovery didn’t feature dialog like this at all…

C’mon!  Did you ever see anything like that in Season One?  How about…

TILLY: “This is the power of math, people!”

BURNHAM: “We’re on a collision course with a pulsar!”
RENO: “Oh, what a relief.  I though we were gonna die…”

PIKE: “Wherever our mission takes us, we try to have a little fun along the way.”

Nobody would have said that in Season One…not even in the first half of the pilot.  Lorca would certainly never have said it.  (Man, that starship was morbid last season!)

And of course, there was the music soundtrack to the trailer.  It was hard-rockin’ Lenny Kravitz doing “I Want to Fly Away”…really catchy and upbeat.  Perhaps not “classic” Star Trek music, per se, but at least it wasn’t the Beastie Boys or some haunting slow ballad version of “I’d Love to Change the World.”

And that final scene in the turbolift where the alien crewman, Linus, sneezes all over Lt. Connolly—that was hilarious (albeit slightly disgusting and a bit over the top silly).

Hey, wait-a-minute!  Now I know why this Season Two trailer feels so familiar to me!

Take a look at this other Comic Con 2018 trailer for the second season of another sci-fi series that’ll be debuting at just about the same time as Star Trek: Discovery…

What Discovery seems to be doing in Season Two is what The Orville did in Season One.  I could totally see that turbolift sneeze scene happening on Fox’s flagship sci-fi series, but it would NEVER have happened during Discovery‘s first season.

So what’s going on?  It’s hard to say with certainty, but I suspect that the folks behind Discovery (and the executives at CBS) are not ignoring what what has happened with The Orville.  Fox’s show debuted to comparable ratings as Discovery‘s pilot, and, even though total viewership dropped after its premiere, The Orville still pulled in 3.5 million viewers in the Nielsen overnights and even higher numbers in the 18-49 demographic when adjusted for delayed DVR viewing over the following three nights.

By comparison, some estimates of viewership for Discovery via CBS All Access are as low as only 250,000 to 500,000 per episode.  (Actually, it’s closer to 250K, but I can’t tell you how I know that.)  And even if every subscriber to All Access was watching Discovery (which isn’t the case), that’s still a million viewers less per episode than what Orville gets domestically.

So that’s at least one possible reason…not just for the added banter and gags but also for the brighter-colored uniforms and—did you notice?—more brightly lit sets.

Another reason for the changes might be the departure of executive producer Akiva Goldsman before the beginning of Discovery‘s second season.  Later on, it was reported that executive producers Gretchen J. Berg and Aaron Harberts were also let go (that’ll free up some much-needed space in the opening credits!), leaving Alex Kurtzman to take over as show-runner.  Personally, I suspect theDiscovery changes were more due to Goldsman leaving, as most of the scenes included in the new trailer were likely taken from the first five episodes of Season Two.  Goldsman was already gone, but Berg and Harberts weren’t booted from the show until early June when episode five was in the can.  Kurtzman takes over with episode six.

Anyway, this isn’t a blog trying to say that The Orville is better than Discovery or vice-versa…so please don’t start yelling at me in the comments!  Instead, I was simply noticing an interesting change to the approach of Discovery going into its second season, based on the trailer.

And truth to tell, I’ve often kinda thought that The Orville might have been a little too silly in places with some of the locker-room humor bordering on inappropriate and tasteless (at least to me).  Sometimes the awkward jokes from Season One that seemingly came out of nowhere felt like speed bumps on a freeway.

So in that way, maybe The Orville could benefit from moving slightly more in the direction of Discovery while keeping the banter but ditching some of the forced gags.  In the same way, I’ve said that Discovery needs a little more of The Orville magic, too, showing crew members chatting and joking around a little, loosening up from the stress-filled Starfleet dysfunction of Season One.  Yeah, the turbolift sneeze gag might be overshooting that mark a little bit, but I think both shows are heading in the right direction going into Season Two.