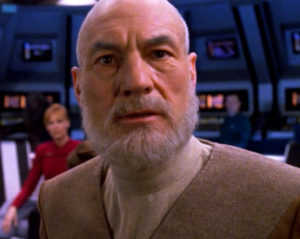 Yesterday, I began discussing the explosive news that hit Trek fandom like a warp core breach over this past weekend: SIR PATRICK STEWART will be returning to play Jean-Luc Picard in a brand new Star Trek television project.  It’s not known yet if this will be an ongoing series, a mini-series, or just a made-for-TV movie or pilot.  No scripts have been written, and indeed, there are no real details yet detailing whether this will be Captain Picard, Admiral Picard, Ambassador Picard, or just some bald guy who used to fight the Borg now running a small winery in eastern France.

But one thing is for sure: CBS is now committed to the project because it’s been officially announced to both Trekkies and the world at large.  Nearly all major entertainment media magazines were carrying the news on their websites within 24 hours.  It’d be tough for CBS to back out now.

But is this a good thing?

After all, in an interview on StarTrek.com back in 2010, Sir Patrick himself said of Next Gen: “I remain very proud of the work that we did, very proud of the series and the movies, but I do not wish to return to it.”  In a convention appearance around that same time where I saw him, Stewart explained that he felt he’d thoroughly examined every aspect of Picard creatively as a actor and was okay moving on.

Is CBS just desperately going back to a well that’s already been mostly tapped…rather than working to create something fresh and new?  Are they relying on Patrick Stewart as “stunt casting” to help draw in more viewers?

At least in my opinion, yes, this is all a good thing—a very good thing, in fact.  In the 24 hours between posting Part 1 of this blog and now, CBS TV Studios President David Stapf said in an interview, “My goal is that there should be a Star Trek something on all the time on All Access.”

Think about it: up until 2016, CBS had never produced a single minute of televised Star Trek.  The studio was a complete “virgin” going into season one of Discovery.  And whether you love the show, hate it, or are ambivalent, the fact is that CBS was bound to get at least a few things wrong—and they’re well aware of it.  Stapf went on to say about Discovery: “…and as we learned, we want to do it right.”

CBS knows there were missteps.  You can see that (as I mentioned yesterday) in the firings of show-runners Gretchen J. Berg and Aaron Harberts five episodes into season two…and the lighter, more comical tone that seems to have been injected into the series (almost reaching Orville levels with the turbolift “sneeze scene” at the end of the Discovery season two trailer).

The writers, producers, and actors, and probably even the suits at CBS are also well aware that fandom is split in their reaction to Discovery.  Some love it, and some loathe it so much that they actively campaign against it and argue vehemently with anyone who doesn’t share their rage.  CBS wanted an unbridled hit for Trek fans and also for the general public.  They know they didn’t get either.

So CBS is making course corrections…and not just to Discovery.  They’re setting “Picard Trek” 20 years after Star Trek: Nemesis.  This gives them a chance to go all “snazzy high-tech” with the sets and costumes and not have to worry as much about continuity and the such.  (Although I shudder to think what fans will do if they see Worf popping up looking like one of those Discovery Klingons!)

I also suspect CBS is aware, on some level, that they dropped the ball on celebrating and even acknowledging the 50th anniversary of Star Trek back in 2016.  CBS was relying on the momentum of just saying Discovery was in production carrying them forward with fans.  Ultimately, though, it was a missed opportunity.

Robert Meyer Burnett (editor of Prelude to Axanar and director of Free Enterprise) told me a few years ago: “Star Trek needs a Kevin Feige.”  Feige is the president of Marvel Studios.  Anything that happens at Marvel happens because Kevin Feige says, “Make it so.”  Feige’s decisions and strategies have led the studio to $16 billion in international box office revenue since 2007.

Star Trek didn’t have that at CBS.  Unlike at Paramount, where Executive Producer Rick Berman steered the franchise (after Gene Roddenberry’s death) through TNG, DS9, Voyager, and Enterprise; CBS just let Star Trek drift aimlessly through space.  Discovery co-creator Bryan Fuller might well have become the “Kevin Feige of Star Trek,” but he was fired while the new series was still early in production.

But earlier this summer, STAR TREK FINALLY GOT ITS KEVIN FEIGE!!

Alex Kurtzman, co-creator of Discovery and executive producer for season one, is now the Discovery show-runner.  Back in June, CBS announced a 5-year, $25 million deal with Kurtzman and his production company, Secret Hideout, to expand the Star Trek universe with multiple new television projects.  But Kurtzman also seems to have become the go-to guy for CBS to reference when talking about how “Star Trek is in good hands.”

In his interview, Stapf seemed to imply that CBS is now trusting Kurzman with the keys to the warp drive: “It’s more Secret Hideout and the rest of the Trek brain trust coming to us and saying, ‘we think this would be really cool, storywise, characterwise.'”  Throughout the interview, Stapf and EVP Original Content Julie McNamara were repeatedly saying Alex this and Alex that when talking about plans for the direction of Star Trek.

So it looks like Star Trek now has its Trek Czar!  (See what I did there?)

I’ll be honest: I was initially somewhat hesitant to get too excited over Kurtzman.  Sure, his production company had just gotten a $25 million deal to develop five or six new Trek shows.  But that could all be just so much hype.  Remember when CBS announced Nicholas Meyer’s deal to develop a new Trek show about Khan?  “I’ll believe it when I see it,” I thought.  Also, I wasn’t keen putting too much trust into someone who produced both Star Trek (2009) and Star Trek Into Darkness…two movies that, at least in my opinion, got Star Trek completely wrong.

But the fact remains that Kurtzman is, at heart, a Trekker (and I really blame J.J. Abrams anyway).  And I would much rather have a FAN being the Trek Czar than some clueless CBS executive.  Wouldn’t you?

Then I heard about the four “Short Treks” that are being planned leading up to season two of Discovery.  These will be self-contained 10-15 minute mini-episodes focusing on Saru, Tilly, and even Harry Mudd.  One of these shorts will even be written by Pulitzer Prize winning author Michael Chabon.

“Hmmm,” thought I, “that actually is pretty exciting!”  It’s different and original.  (In a way, these shorts are almost like fan films.)  And it’s perfectly suited for the All Access “format”—since All Access doesn’t require any format.  Content doesn’t need to be a certain length at all.  So if you’re gonna force us fans to pay to watch Star Trek (and yeah, they are), then at least use the streaming platform innovatively.

Then I watched this video from last weekend…

I’m told that no one at the Las Vegas convention was expecting to see Patrick Stewart.  He wasn’t even an announced guest!  This kind of “theatrical” surprise announcement by Kurtzman was reminiscent (to me, at least) of the way Steve Jobs used to present the newest Apple products.  Was this “OMG moment” Kurtzman’s idea?  It certainly wasn’t anything like the style that the CBS executives had been employing these past few years.  If it was Kurtzman’s idea, then sign me up for his fan club!

But it didn’t stop there.  As I learned more about this new Picard project, I discovered that it was all the brain child of writer Kirsten Beyer.  If you don’t know who that is, remember the Discovery episode”Si Vis Pacem, Para Bellum” where Saru, Burnham, and Tyler go down to that forest planet and Saru kinda freaks out?  Many fans (even ones who don’t like Discovery) have said they thought it  was the most Star Trek-ish episode of the series thus far.  Beyer is also the lead author of Pocket Books’ Voyager novel series, having written nearly a dozen of them, and functions as the coordinator for Discovery tie-in media, such as comic books and novels.

In other words, she’s not just a writer (and a good one); she’s a real fan.  And this fan suggested an idea that she is now getting the chance to develop and flesh out.  What a dream come true!  And one of the people she’s been fleshing it out with is the aforementioned Michael Chabon, also a major Trek fan and a damn good writer.

So, it this the turning point for Star Trek?  Is Kurtzman the Trek Czar we’ve been waiting for to finally give this franchise some direction again without letting the suits at CBS run roughshod all over him?

We can but hope!

But one thing is certain, CBS is now taking Star Trek much more seriously than they ever have before.  Yeah, things could still go horribly wrong.  The older Picard could end up being like King Lear, weak and senile, as he enters his twilight years.  Maybe a Shakespearean actor like Sir Patrick would appreciate the opportunity to explore that unseen aspect of the character, but will it make fans cringe to see a fading echo of the once vibrant Jean-Luc Picard descending into tragedy and madness?

But I’m not going to predict or expect the worst. Instead, I’m choosing to look at this all with optimism.  I remember just ten short years ago: when Star Trek: Enterprise had been cancelled prematurely, and Star Trek‘s prospects of returning to television seemed as remote as the Andromeda Galaxy.  Now look where we are!

I’ve never been one to accept the argument that “no Star Trek is better than bad Star Trek.”  No Star Trek means it’s dead, Jim.  For over a decade, we had no new Star Trek on any television set.  Now we not only have one series, but we’ll soon be getting a second, plus the Short Treks, and possibly even more beyond that.  If we’ve gotta pay for Star Trek, then better to get a LOT of Star Trek to make that six bucks a month worth it!

Star Trek has lived long…nearly 52 years.  Most TV shows fade away after that much time.  But despite some stumbles and missteps, Star Trek is most assuredly prospering right now.

To me, as a fan, there’s really good news.