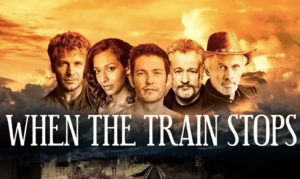 Right now, plans call for taking Train… to a number of film festivals, so it won’t be made available for free online anytime soon.  Afterward, the plan is to seek distribution on platforms such as Netflix, Hulu, Amazon, etc.  However, for a mere $20 donation, you can become a donor and be sent a link to download a copy for yourself.  Any contributions at this point go toward marketing the film and entering it at various festivals globally.

What makes this film so rewarding to watch is a captivating and stellar performance by Michael Forest as a U.S. Marshall transporting an escaped prisoner by train.  This role will most likely be Michael’s last, as the 89-year-young actor has decided to retire.  But what a way to take his final curtain call!

When the campaign passed its first stretch goal of $50,000, they released this special video tribute to Michael, marking the ending of a six-decade career with nearly 300 roles.  It’s really worth watching if you have a moment…

Learn more about When the Train Stops at:

4 thoughts on “Life after STAR TREK CONTINUES – cast members REUNITE for WHEN THE TRAIN STOPS!”