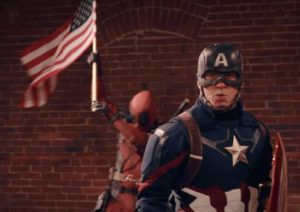 Set your time travel device of choice back to September of 2016 when a fellow by the name of MICHAEL S. PARKER took ownership of a gorgeous, film-accurate Deadpool costume.  But what to do with it?  That was the question!

The answer came from a voice in Michael’s head that sounded just like Deadpool himself, and it whispered: “Gaston.”  Michael had been a fan of the Disney animated feature Beauty and the Beast for decades, and he especially loved the song “Gaston.”  And suddenly the idea came to him: “No one [insert verb] like Deadpool…”  Oh, this had to happen!

The following month, the cast and crew of Star Trek Continues got together in San Francisco for a screening of the episode “Still Treads the Shadow.”  Michael was an associate producer on that episode, having made a sizable donation for its production.  (Two episodes later, Michael would appear in the 2-part STC finale “To Boldly Go” as a Romulan lieutenant on the enemy bridge.)

After the screening, Michael was having dinner with the director of the episode, JULIAN HIGGINS (who had also directed the STC episode “Come Not Between the Dragons“) and also some of the cast.  Michael had first met Julian back in August when Michael traveled to Georgia to watch the filming, and the two had hit it off.

After a sushi dinner, Michael told Julian his idea for a Deadpool musical version of “Gaston,” and Julian immediately jumped on board.  Julian’s roommate was PAUL BIANCHI, who wrote the teleplay for Star Trek Continues‘ second episode, “Lolani,” along with a dozen other TV episodes and shorts listed on IMDb.  Like Julian, Paul was totally gung-ho to write a Deadpool musical and had completed a full script parody of the song in about two and a half hours.

Of course, the thing about Deadpool is that he’s known for killing people—a LOT of people—often in pretty action-packed but gory ways.   In other words, this production was gonna need stuntmen…oodles and oodles of stuntmen!  Fortunately, Julian had another friend, BRIAN DANNER, a fight choreographer who runs a company called Sword Fights, Inc.  His team of stunt people specialize in fight training and stage combat…exactly what this video needed!

As weeks turned into months, the pieces just all seemed to fall into place.  In addition to stunt people, actors were also cast.  They quickly discovered that the person playing their bartender had an amazing baritone singing voice.  The actress cast to play Rogue was originally from Tennessee and had an authentic southern accent.  Julian just happened to have a severed head in his closet from another project that they could use for the shoot.  They found the perfect bar location in North Hollywood to film the scenes…all was going perfectly.

In the meantime, Michael was preparing for what would be a very demanding part.  Although a second costume was purchased to be worn by ADAM CRITCHLOW for all of the fighting stunts, this was still going to be a very physical performance.  So Michael worked out at the gym because, as he commented in an interview, “…the suit is not forgiving.”  Michael carefully analyzed the way Ryan Reynolds moves his body while in the Deadpool costume, which needs to convey with exaggerated physical movements what most actors can usually communicate through facial expressions (not an option in the full mask).

Michael, who has a background in music, also worked tirelessly to study Ryan Reynold’s voice inflections and his approach to speaking his lines.  After countless rehearsals to get things just right, fans listened to the finished musical and many weren’t certain whether or not that actually was Ryan Reynolds (no, folks, it really is Michael Parker).

With cast and crew chosen, costumes fitted, the song recorded, the fights and stunts all choreographed and planned out, the filming location dressed to look like a seedy bar, and even a stuffed unicorn chosen for Deadpool to hump, everything was ready for a 2-day shoot in early February of 2017…barely five months after Michael got his initial brainstorm!  A few weeks later, they did some pick-up shots for about six hours and shot a really fun 360-degree behind-the-scenes video…

Post production was completed in less than a month, and then the producers discovered an amazing coincidence.  Disney’s live-action remake of Beauty and the Beast (with Emma Watson) was scheduled to come out on March 17, 2017.   They’d been planning to release their parody musical in February, but instead they held it back until March 22, giving the Disney film five days to have its fun at the box office and then riding the Belle/Beast-mania wave when they unveiled their totally unexpected parody (almost like they’d always planned for the synchronicity, which they actually hadn’t)…

The video went viral almost immediately with a half million YouTube views in the first 48 hours and 4 million views after just two and a half weeks.  (It’a now up to 7.5 million.)

The video was also a hit with award shows.  Among its honors:

You might be wondering who paid for this video…or did everyone just work for free?  No, they didn’t work for free.  But as happens often with fan films and passion projects, nearly everyone charged their most minimal amounts.  Still, there were also fixed costs for costumes, props, make-up supplies, stunt rigging, equipment and location rental, etc.  IMDb reports the total budget was about $20,000, and Michael Parker paid for everything out of his own pocket.  Deadpool the Musical became the first official release from Michael’s production company, Zamurai Productions.

So what about their second release: Deadpool the Musical 2?  How did that sequel come to be, and how did they manage to make it so much more ambitious than the first: more songs, larger cast, way more costumes, way more stunts, more locations?  And did Michael pay for all of the second one the same way he paid for the first?  I wanted to know, so I decided to ask Michael himself…

EDITORIAL NOTE – I had intended to interview Michael Parker for a follow-up “part 2” interview about the second Deadpool music video. Michael agreed, and I sent him a number of questions to answer at his convenience.  After several weeks, I learned from Michael that he had suffered a personal loss in his family and had also gotten swamped at work.  Not knowing if/when he would have time to write up decent interview answers for me, Michael recommended that I publish the blog now, as is, rather than delay it.  If I do eventually receive Michael’s answers, I will add them as a “part 2” at some later date.