AXANAR has inspired several fans, including me, to “expand” that universe. Whether you consider it “Prime” or the “Axa-verse,” for some of us, it’s FUN to play in this particular sandbox. ALEXANDER RICHARDSON (the designer who created the console graphics on the USS Ares bridge set…along with many other graphics for Axanar Productions and Ares Studios) is currently working on full blueprints of the USS Ares. MARK PAYTON has written a multi-chapter Axanar novella titled The Inverness Revision.  And I myself wrote an Axanar short story “Why We Fight,” illustrated by the amazing MARK McCRARY.

But there’s one Axa-fan who has, in my opinion, topped us all. And yesterday was his birthday…Happy Birthday, TREY McELWAIN!  Trey loves Axanar so much that, back in the summer 2017, Trey released a four-page (including cover) Axanar mini-comic book story titled “Trial by Fire.” Not an artist himself, he paid his friend DANIEL FU to illustrate it…and it turned out awesome!

Not content to simply sit on his laurels, though, Trey set out on a much more ambitious undertaking: to make an entire Axanar comic book SERIES! This would be no small feat, and not at all cheap (as starving artists like to eat, and Trey—not exactly in the top 1%—was paying Daniel out of his own pocket, not crowd-funding).

Trey put up a website, Axanar Comics, and began posting pages there as they were completed. Initially, this was supposed to be one per month, but three pages were completed quickly, and instead of waiting, Trey posted them all at once. Within two months, the cover and six additional pages were released, finishing part one. That was last July.

Unfortunately, about that time, Trey suffered a herniated disc in his upper cervical/spinal column. The doctors and physical therapy bills ate up most of his and his wife’s disposable income for several months. So for the past eight months, no new story pages have been released. But actually, that was good news for me! Let me ‘splain…

Inspired by Trey, I decided to transform an Axanar fan film script that I’d written (and would certainly not be able to afford to shoot) into a short comic book story of my own. Turning the shooting script into a comic book script, I began working with Daniel Fu just as he was finishing up with part one of Trey’s “Arcanis IV” story. So for the next few months, Daniel and I collaborated, and he did an incredible job delivering a cover and four fantastic pages of artwork to me, leaving three page still to finish as the holidays approached.

Now recovered (financially and physically…mostly), Trey was ready after the New Year to kick his starship back into warp. And Daniel is back on track to deliver one page per month for Trey to publish as he continues his story. (In the meantime, Daniel is also squeezing in my remaining pages…although I’m in no real rush. When it’s ready, it’s ready.)

Meanwhile, Trey has quite an aggressive release schedule planned out! Take a look at what he sent me…

I mentioned that was a lot of work for Daniel, and at one page per month, this could take a decade or more to finish! Trey responded:

Recently, I have considered bringing on other artists in order to help me to get this timeline out a little quicker.  A couple of the “scripts” for a couple of the books in the timeline were written in more of a similar manner to the short story that you wrote, “Why We Fight,” an illustrated Axanar Short Story, illustrated by Mark McCrary.  The first of its kind I believe.

Speaking of Mark, he is one of the artists that has agreed to do one of the short stories with me, so that is very exciting!  I have followed Mark’s illustrated work for quite some time now.  I knew of the Star Trek online Fan Comic, “Save What From Heaven As The Breezes Blow” way before I knew of Axanar.  I was super-delighted that he did the illustrations for your short story. “Why We Fight” made me want to follow suit, and do something very similar.”

I found it amusing that Trey’s work on his original Axanar comic had inspired me to write “Why We Fight,” and now my short story was inspiring him to do something similar. That’s one of the great things about building castles in the Axanar sandbox!

Anyway, enough with the preamble. Let’s show you the latest page. You can find it at the bottom, as I’m including all of the completed pages released up to this point for those of you wanting to see the story so far… 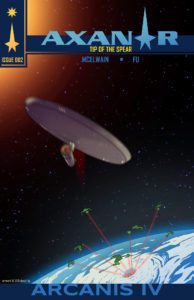 For the HI-DEF versions of these pages, make sure you go to the Axanar Comics Website to find them!
https://axanarcomics.wixsite.com/axanarcomics