Well, it looks like there isn’t a settlement yet in the AXANAR copyright infringement lawsuit.  And how do I know this?  Because I now have confirmation that the defense will be filing a motion for summary judgment with Judge Klausner of the Ninth Circuit Federal Court later on today.  (I don’t yet know if the plaintiffs are planning to do likewise, but if a settlement hasn’t been reached, then it’s a pretty sure bet.)

And how did I get confirmation that the defense will be filing their motion later today?  Because yesterday evening I was asked to sign this declaration: 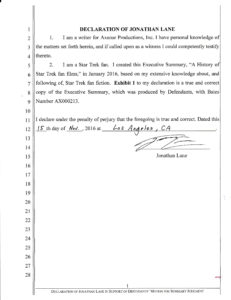 It will be part of what I am told by the Axanar defense team will be a VERY long filing.  There’s a philosophy in legal filings that it’s better to keep things short and sweet, and  J. Bradford McCullough had the following to say in this 2011 article “The Ten Commandments of Summary Judgment Practice“:

8.  Remember the beauty of brevity.

Less is generally more. Judges are busy and appreciate it when we get to the point. Do not say in 25 pages that which can be said in 15 – or 10.
Unfortunately, I know that that particular boat has sailed, as the Axanar filing will be anything but brief!  How do I know this?  Because one of the things they will be submitting is a 128-page “History of Star Trek Fan Films” that I prepared back in January.  Yep, 128 pages…single-spaced!

Since we’re kinda in the “calm before the storm” while we wait for the actual filing later on today, I’d like to take a moment to talk about this document I prepared, how and why I prepared it, and how it will likely be used in the defense of Alec Peters and  Axanar Productions…

Like many fan film followers, I first found out about the CBS/Paramount lawsuit during the morning of December 28 when The Hollywood Reporter featured an article about the studios suing a fan who made a Star Trek film of his own using donated money from other fans.  “Oh, crap!  Axanar is in serious trouble now!” I thought to myself.  I wanted to help…but how???

It was the week between Christmas and New Years, and my family was staying out in Palm Springs with my wife’s parents.  Jayden was happily playing with Mimi and Papa, Wendy was relaxing from (over)work, and I pretty much had little to do besides watching college football, taking the occasional walk, and sitting at my computer.

These were the days before I had Alec Peters on my iPhone contacts, although we did e-mail each other from time to time.  But back then, I didn’t want to bother him.  I knew how busy and frantic he must be, now at full red alert because of the lawsuit.  So I began working on my own to create a complete list of all Star Trek fan films.  After all, I’d already been writing the weekly “Fan Film Friday” blogs for the Axanar website over the past five months.  There was a good place to start.

At the time, I didn’t understand the parameters of the lawsuit as I do now, and so I confused copyright with trademark.  Trademarks have to be vigorously defended by the trademark holder or else they can be successfully challenged by violators.  I thought the same was true for copyrights (it isn’t) and that by allowing fan films to exist unchallenged for 50 years, CBS and Paramount wouldn’t be able to succeed in their infringement lawsuit.

So in my mind, in order to save Axanar, I now had to show just how many Star Trek fan films existed that were never challenged by any Star Trek copyright holder–from Paramount to Gulf+Western to Viacom to CBS.  As I said, I was wrong in my assumption about copyrights and non-enforcement.  The studios can choose to sue or not sue anyone they want and it doesn’t affect their ownership or ability to successfully claim infringement.  But my labors would nevetheless still end up being useful (or else my 128-page “magnum opus” would not be included in today’s filing).

So for the next few days of my vacation in the desert, I did endless research on Trek fan films.  I began with the most familiar ones: New Voyages, Continues, Renegades, and added to that list with Farragut, Exeter, Valiant, and so many others.  I jumped down a fan film rabbit hole, following suggested links on YouTube (the stuff that appears along the right column).  I looked up stuff on Wikipedia and other fan wikis and, of course, on Star Trek Reviewed.

And I didn’t just list the fan films.  In my mind, that wasn’t nearly enough.  I needed to explain their backgrounds, who made them, and most importantly, how much of the Star Trek intellectual property each one used.  Was there original music or not?  Were the uniforms taken directly from Star Trek or new designs?  Were the characters original or established?  And of course, was any crowd-funding done and how much was collected?

Now, you might be asking the obvious question: “Jonathan, aren’t you just tattling?”  That’s certainly a valid point, but the way I was thinking at the time was that all of these fan films are already out there and have been…some for many years.  There’s nothing “secret” in anything I’m writing about.  Many fan series even have their own websites and crowd-funding campaign pages.  And heck, Star Trek Reviewed has the most complete and amazing list of Trek fan films anywhere!  If CBS and Paramount really did want to initiate a crackdown on all Trek fan films, me NOT writing up my summary document would not have stopped them.  They still had plenty of places to go to get lists of fan films to go after if that’s what they wanted to do.

And in my head, I also thought, “The only way to really protect fan films is to make sure Axanar wins this case!  If the studios fail to shut down Axanar, then they’ll think twice before trying it again.”  I had to help make that happen, and this was the only way I could think of to do it.

I was back home, and it was mid-January.  I’d already compiled a list of almost 35 fan films, when I got the following Facebook IM from Alec Peters:

We need someone to do a comprehensive review of all Star Trek Fan Films for the lawyers.  Not reviews of the episodes, but the facts.  Names, dates, episodes, money raised, websites, etc.  Erin asked for it

From there, I was working double-time (triple time, even!).  I kept tracking down more and more fan films.  I’d send along new and longer versions of the ever-growing document to Axanar attorney Erin Ranahan as I continued to expand the list.  And to keep things organized, I put all the fan films into chronological order.  For the longer running fan series, I’d list them from the date of their first release and then say something like “2009-present.”  I included links to videos, links to fan film websites, links to crowd-funding campaign pages, and of course–being the graphic designer that I am–I even included an image for every fan film/series at the top of each page.  By the time I finally finished, we had 128 pages, and more than a hundred fan films and series covering over 250 hours (my estimate) of filmed, posted, unlicensed fan video Star Trek.

I organized it with one film fan/series per page.  Some pages were shorter than others, and a few of the more major productions got two or three or even four-page history write-ups.  I went all the way back in time to the earliest fan films that were made while TOS was still in first run (mostly kids in their Star Trek pajamas playing in the living room and filmed by their parents on Super 8).  At first, I wrote in a very dry, analytical way.  But eventually, I began putting even myself to sleep!  So I soon began to use my more whimsical writing style as I do here on this blog site.

In two cases, I actually said negative things about a particular series’ quality (or lack thereof)–not realizing that this document would someday go public.  I figured it would just be a handy reference guide for the attorneys.  When I learned yesterday that it had already been shared during discovery and would now be part of the summary judgment filing, I asked Erin if I could change or remove those two negative comments.  In the eleven months since I first wrote the document, I’ve cultivated a much deeper respect and appreciation for ALL fan films, even ones that aren’t as good as others.  And none of them deserves public ridicule in any way.

Unfortunately, once submitted for discovery, a document can’t be altered.  It can, however, contain redactions.  And so, if you take a look at the history and see black lines crossing out a couple of sentences and wonder, “What’s Jon hiding?”–well, I’m hiding my own unfair criticisms of two fan series that deserve to be appreciated on their own merits and not disrespected by me.  And trust me, I didn’t say anything particularly nasty or hurtful.  It’s just that any criticism is not warranted when simply creating an historical overview of fan films, and I didn’t want to sour fans on checking out those two series if they felt so inclined.

And what happens now?  Well, we’ll likely have the final filing up on FAN FILM FACTOR either tonight or tomorrow.  I’m guessing my fan film history document will be used to support a claim of non-willful (innocent) infringement, as the studios permitting this many fan films to exist over five decades would certainly have given Alec Peters the reasonable impression that his fan film would not anger the studios either.  And if that assumption of Alec’s can be proven, then the statutory damages per violation if he loses the case go down from $150,000 each to only $200.  So my 128-page document could literally end up saving Alec Peters $8.5 million!  I’d call that helpful.

In the meantime, you all now kinda know the “secret origin” of FAN FILM FACTOR.  I wasn’t able to discuss it previously because my document was considered (at the time) privileged and confidential.  But now that it’s going public, so can I.

So the way FAN FILM FACTOR began was when Alec first saw an early version of my document.  With such an immense collection of research on Trek fan film history, I had waaaaaaay too much for just a weekly blog on the Axanar website.  Alec said to me, “Jonathan, you really need a blog of your own.”  He asked Mike Bawden to help me set it up, and the rest is history…fan film history.  Heck, one day I might even turn it into a book.  At 128 pages, it’s almost that now!

I’ll try to provide an analysis of the motions for summary judgment once they’re filed, but please be patient.  They’re likely going to be VERY long and tedious to read trough, and my family and I will be traveling to the East Coast this weekend and staying through the Thanksgiving holiday.  I’ll post something if I can, but if I can’t, just know it’s because, instead of reading hundreds of pages of legal filings and blogging about them, I’m probably playing with my nephew and son and eating ridiculous amounts of turkey.  Gobble, gobble.