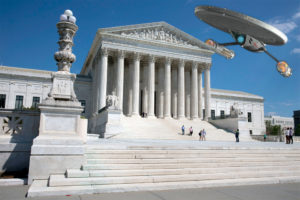 Imagine it’s about three or four years from now, and you’re watching the news.  Suddenly, you start hearing William Shatner’s voice, “Space, the Final Frontier…” as the news anchor says, “Star Trek fans are about to go where they’ve never gone before. The Supreme Court has just agreed to hear a case involving a 2014 Star Trek fan film called Axanar…”

So you think I’m trippin’, huh?  You think I’ve been smoking la weed a’ toka (now legal here in California, but still not my thing).  Or maybe you just think I have delusions of grandeur about Axanar and I’m completely out of touch with reality.

Well, possibly.  After all, the Supreme Court gets more than 7,000 petitions each year to hear cases…and accepts only about 100-150 of them.  And Supreme Court cases generally involve very important and complex issues of law that have national implications…especially if someone’s constitutional rights are being violated in some way.

So you probably don’t think that a copyright infringement lawsuit against a small Star Trek fan film could possibly rise to the level of having national implications.

But thanks to Judge R. Gary Klausner’s ruling last Wednesday during summary judgement that fair use is an invalid defense at this trial, the Axanar lawsuit is now very much a constitutional case with national implications…

Okay, get comfortable, ’cause we’ve got a LOT to go over today (and when is that NOT the case with this lawsuit???).  And it all began with me doing a little research for yesterday’s blog about appealing the case based on the fair use ruling by the judge.  I was wondering is that even allowed?  How common is it for a judge to take the decision of fair use away from a jury and rule on it himself?

That research led my to a fascinating article from the University of California, Davis School of Law’s Law Review (volume 44, issue 2 from 2010-2011): “Judges Playing Jury: Constitutional Conflicts in Deciding Fair Use on Summary Judgment.”  It was written by Professor of Law Ned Snow (currently at the University of South Carolina), and didn’t put me to sleep like I thought it would.  In fact, the more I read of it, the more I wanted to read…and it eventually convinced me that not only CAN the Axanar case go the the Supreme Court, it actually SHOULD…and is an opportunity to challenge a recent and disturbing 30-year trend in law that invalidates and ignores more than two centuries of legal precedent!

Wow, all this from a Star Trek fan film???  Yep.  But first I need to tell you what Professor Ned Snow said in his 70-page law article.  (I’ll try to be a little more brief…but no promises!)

We’ve discussed fair use many times before.  If you want a quick primer, just go back two days to this blog entry.  But what is the history of fair use?  Have judges typically decided its validity before trial, or has that traditionally been left up to juries?

It turns out the answer is juries…at least for the first two centuries of this nation.  I’ll quote from Professor Snow’s article:

Yep, fair use spent two hundred years being decided by juries, not judges!  I betcha didn’t even know fair use went back that far!  A version of fair use actually came from English Common Law, which greatly influenced our own legal procedures.  And the Founding Fathers were big on the concept of empowering juries, so they got to determine it during infringement trials in courts of law.

In fact, it turns out that the first time that a judge in the U.S. ever ruled on fair use himself during summary judgment didn’t come until as late as 1968!  And even then, Judge Wyatt called fair use a “difficult issue” and admitted that he had an “initial reluctance” to rule that there was, indeed, fair use in the case.  Nevertheless, he issued his ruling…in favor of the defendant, if you’re curious.

What followed in the 1970s and 80s was a period of rapid and mostly inconsistent transition from fair use being given exclusively to juries to rule on during to the decision being hijacked by judges before trial (ruling on the merits of fair use as a pure issue of law rather than a finding of fact).

Like a flock of geese taking off to the east and then suddenly all changing direction and heading west, so too was the shift of the federal courts from fair use being for juries to decide to being a matter for judges.  There was no discussion or debate, no new law passed by Congress.  The birds just all began, one by one, to fly in a different direction.

By the 1990s, the transition was complete.  Judges now rule on fair use as a matter of law almost exclusively, issuing orders from the bench at summary judgment just as Judge Klausner did last Wednesday.  And that brings us back to Axanar…

In yesterday’s blog, I explained how, if Alec Peters loses the copyright infringement lawsuit at trial, he has grounds for an appeal to the Ninth Circuit Court of Appeals in Pasadena, CA.  His attorneys can claim that, for two centuries, fair use was a question of fact weighed by juries, and Judge Klausner’s declaring the fair use defense invalid as a matter of law was a mistake ignoring legal precedent and tradition stretching back to the infancy of America itself.

Cry me a river, though, because there’s a good chance the appellate judges will respond with the legal equivalent of “Tough noogies!”  After all, even though 200 years is a pretty long time, the last 30 years have seen a pretty consistent agreement among all of the federal courts that fair use is a matter of law, not fact…and judges can rule the fair use defense invalid at summary judgment if they choose to.  Appeal denied.  Have a nice day.

At this point, there’s nowhere else for Alec Peters to go but up…to the Supreme Court.  But how does he get there?  Just saying, “The appeals court got it wrong!” ain’t likely gonna fly…not with another 6,999 cases competing for maybe 100 open slots on the high court’s docket.

So how do Alec Peters and his lawyers get the Supreme Court’s attention?

You’re probably aware that the Bill of Rights (written by future president James Madison) consists of the first ten amendments to the U.S. Constitution.  You probably can name a few.  Everyone knows the First: Freedom of Speech (it actually says a lot more than that.)  The Second Amendment: right to bear arms (as opposed to arming bears), that’s a biggie in he public awareness.  And then there’s that Fifth Amendment: the right to remain silent (and again, a whole lot more than just that).  If you’re American, you really should read all ten amendments…after all, they’re YOUR rights.

Anyway, who here knows about the Seventh Amendment?  Don’t be embarrassed; I had no idea either until I started researching all of this appeal stuff!  But here it is:

In suits at common law, where the value in controversy shall exceed twenty dollars, the right of trial by jury shall be preserved, and no fact tried by a jury, shall be otherwise re-examined in any court of the United States, than according to the rules of the common law.

Short form: every citizen has a right to a trial by jury…assuming there’s more than twenty bucks at stake!  (By the way, factoring in inflation, that’s about $500 today, but the amendment has never been changed, so it’s still technically $20.  I didn’t say the U.S. Constitution isn’t still a little wonky in places.)

And the reason that jury trials are so fundamental to our rights as Americans is because, well, let me let Professor Ned Snow tell you himself (because he’s a LOT smarter than I am!):

The jury right reflects the view that society trusts several citizens to decide a matter admitting discretionary judgment more than society trusts a single aristocratic judge.  For like any other position of power, the office of judge exposes its officer to subtle but weighty influences that may affect impartiality.  Influences attend the position of judge that are less likely to attend the position of juror. The right to a jury guards against those influences.  Influences on judges that the Seventh Amendment was intended to guard against apply as much in fair use today as they did in 1791.

So what the heck does this have to do with Axanar?  After all, Alec Peters will get his trial by jury.  Done deal.  His rights as an American citizen have been upheld, right?

Well, not so fast!

Okay, time for yet another cliff-hanger!

But because the second part of this blog is so critically important to explaining why the Axanar case has national, constitutional implications, I want you all to be bright-eyed and bushy-tailed when you start reading it.  And I’m guessing that, right now, your eyes are starting to glaze over.

So come back tomorrow for Part 2, where we look at why Axanar may be the only chance the Supreme Court has of righting a wrong that’s been going on for three decades.  And is it really that inappropriate for judges to decide fair use?  Why should juries get to have the final say?  And finally, does Alec Peters even want to take this case to the Supreme Court (it’s such a long haul)?  I asked him, and I’ll tell you what he said…

68 thoughts on “Could the AXANAR LAWSUIT go all the way to the SUPREME COURT? (Part 1)”