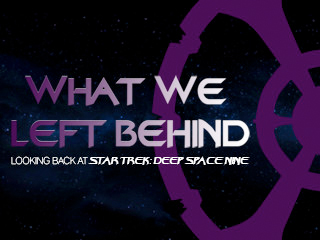 If you’re like me, whenever someone asks you, “What’s your favorite Star Trek series?” you don’t even hesitate before answering with a confident smile, “Deep Space Nine.”  And then you usually get one of the following three responses: 1) “Really?  I never got into that one and didn’t even watch most of the episodes…”; 2) “Are you kidding?  That show was so dark!  Next Gen/Voyager/TOS was sooooo much better!” (they never seem to say Enterprise); or 3) they immediately get it because they agree completely.

(And usually when we encounter a member of the first response group, we beg them to binge-watch the series in episode order!)

People like me find it inconceivable and frustrating that DS9 is so often seen as the “bastard stepchild” of Star Trek…the series that, instead of boldly going, boldly stayed in one place.  But that was the point.  By not having to constantly introduce and explain a new culture and/or alien threat or spatial anomaly each week, it left much more time to fully develop certain key races like the Bajorans, Cardassians, Ferengi, Kligons, Vorta, Jem’Hadar, and Founders.  And of course, it made room for so many more intriguing characters who got to develop slowly and compellingly over time.  And hey, if you just want to see space battles…just wait’ll those last three seasons!

Despite its critical success among reviewers and a growing appreciation from the fans, as the years have gone by, DS9 seemed to be fading from the Star Trek totem pole.  TOS and TNG each got remastered special edition DVD/Blu-ray sets with new VFX and all sorts of wonderful extras.  But with DS9 next on the list, no remastered addition was ever announced, and it seemed the love-fest was finally over.

Would Ds9 ever get the credit and recognition that it deserved?

Well, not from CBS or Paramount.  But as 50 years of fan films have proven, if you want something decent from Star Trek, sometimes you just have to do it yourself!

WHAT WE LEFT BEHIND isn’t a fan film in the strictest sense of the word.  It’s more of a fan documentary, and the “fan” is actually the executive producer of Deep Space Nine, IRA STEVEN BEHR.  But the point is that CBS wasn’t planning to make any documentary about DS9, and neither was Paramount.  So if Ira didn’t do it, who would?

Many in the cast were all too happy to help out–they really LOVED the show!–and there are interviews a’ plenty ready to be edited to together!  In fact, take a look at who’s already involved:

Directing this documentary is a man who is no stranger to Star Trek or Star Trek documentaries: ADAM NIMOY, son of the late Leonard “Spock” Nimoy.  Hot off the success of his critically-acclaimed FOR THE LOVE OF SPOCK biopic on the life and legacy of his famous father, Adam is now applying his new expertise in creating Trek documentaries to finally doing justice to Deep Space Nine…just in time for the 25th anniversary of that show’s debut back in 1993.

During the summer of 2015, Adam Nimoy raised $662,000 from Trek fans via Kickstarter, and most of this went toward licensing fees for clips from Star Trek.  Now he and Ira are doing the same for What We Left Behind.  They’ve set their donation goal much lower than that…only $150,000 to cover licensing of clips plus traveling for additional interviews, and of course, the time-consuming and critically important task of post-production.

Of course, that $150,000 is only a starting point.  With more money, they can get more clips, do more interviews, add-in more extras, and make an even better documentary.  And one of the things fans are most intrigued about seeing is a segment where the writers of the series reconvene in a meeting room and try to figure out ideas for an imagined EIGHTH season of Deep Space Nine.  What would have happened to Benjamin Sisko?  How would Garak rebuild Cardassia?  Could Odo really stay away from Kira?  What would Jake do without his father?  Would Ferenginar be ready for Grand Nagus Rom?  (Okay, forget the novels, kids.  This is a hypothetical, imaginary season eight!)

And it’s looking very much like they will have that chance to make the finished product even better because $150,000 was raised in LESS THAN A SINGLE DAY!!!  It’s now Day 2, and they have just crossed $170,000…and word is only just now beginning to spread!  How much will they raise in 30 days, I wonder??? 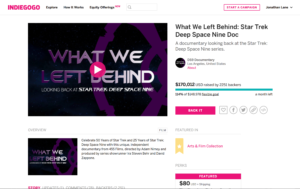 Now, you might be wondering how this all jibes with the fan film guidelines.  Well, technically, this isn’t a fan film; it’s a professional documentary created by the former executive producer of the television series.  They are also purchasing a license…at least for the clips that will be used.  So the fan film guideline rules about a $50,000 crowd-funding cap, a 15-minute time limit, no perks, no paying people, and no featuring anyone who worked on Star Trek professionally in the past (which would be, like, everyone!) won’t apply here.

By the way, one of the perks was a 10-minute phone conversation with Ira Behr for a $150 donation.  I grabbed one of the twenty slots available, and–if he’ll let me–I want to spend my ten minutes asking Ira about Star Trek fan films and does he think the door is now cracked open just a little for well-funded Trek fans with professional capabilities to license Star Trek…even if just in a very limited way?  We’ll see what he says.

In the meantime, you’ve still got 29 days to make a donation of your own…and yes, they have perks (apparently licensed ones)!  Here is a link to their Indiegogo page:

The pitch video alone is worth the price of admission…