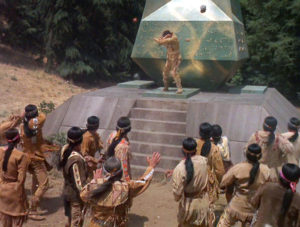 First I should mention (in a follow-up to our previous post) that the survey results are in.  I invited members of the SMALL ACCESS protest campaign to vote in an online Facebook poll: which ONE if the new fan film guidelines feels like it is the most problematic for fan filmmakers?  This would be the guideline that Project: SMALL ACCESS will focus on convincing CBS and Paramount to revisit and revise.  And there was a clear winner: Guideline #1.

However, Guideline #1 is actually a two-part guideline made up of the following:

#1a – The fan production must be less than 15 minutes for a single self-contained story, or no more than 2 segments, episodes or parts, not to exceed 30 minutes total…

#1b – …with no additional seasons, episodes, parts, sequels or remakes.

It’s possible for us to request a revision by CBS to one part of this guideline without necessarily changing the other part.  And so I divided Guideline #1 into two options, and together these were, by far, the highest vote-getters, taking more than 95% of the nearly 140 submitted responses.  So which one got the most votes?

With nearly THREE QUARTERS of the total votes cast, the “winner” was:

#1b – …with no additional seasons, episodes, parts, sequels or remakes.

Members wanted fan productions to be able to continue beyond just two 15-minute episodes.  And really, who can blame them?  Fan productions assemble casts, build sets, and create interesting characters for themselves to play.  Capping those character appearances at 30 minutes of maximum screen time would frustrate many fans who simply want their Vulcan-Trill-Ferengi-Klingon hybrid doctor/helmsman/security chief to be able play around on the bridge of the USS Whatever for more than just two 15-minute episodes.

Of course, we do need to acknowledge the very reasonable concern by CBS and Paramount: fan productions splitting a 2-hour feature-length film into eight 15-minute segments.  Without the “no series” guideline, this would be a very easy work-around to sneak a full-length movie through on a technicality.

But I believe I have a compromise to make both sides happy on this one, and I call it: THE ANIMATED SERIES OPTION.

I don’t mean to suggest that all fan films must suddenly be animated.  Instead, I’m referring to the animated Star Trek series from the 1970s.  Those episodes were each only a half hour long (24 minutes, actually), and divided into two acts separated by a commercial…in many ways just like the guidelines limit Star Trek fan films to two 15-minute parts.

But the animated episodes were also a continuing SERIES.  It was simply that each episode had a unique story with a beginning, middle, and end.  The next episode featured the same starship and the same crew but with a completely different plot.

Could that same approach work for fan films?  I would recommend a revision to the first guideline to read as follows (with a change to the second part):

This is the proposal that I would like to take to CBS and Paramount.  But it brings up an important issue that I need to discuss with the members of the SMALL ACCESS campaign.

When I first launched Project: SMALL ACCESS, the idea was NOT to boycott Star Trek—not Beyond, not Discovery, not anything.  Instead, I simply wanted members to watch Discovery in groups where there was a single “designated subscriber” to CBS All Access, which would decrease the studio’s potential subscription revenue…not eliminate it entirely.  It was a way to (hopefully) get their attention long enough for our voices to at least be heard.  In short, it was the “stick.”

But now we need to discuss the “carrot.”

It’s easy to shake our fists in the air and threaten like an angry mob, but are we willing to put our money where our virtual mouth is?  Let’s assume, just for the sake of argument, that CBS and Paramount find our proposal reasonable and agree to make the adjustment.  Then we need to keep up our end of the bargain.

So if f we were going to protest the guidelines by subscribing to All Access in groups or “collectives,” then if the guidelines get changed at all, then I think we should be willing to subscribe as individuals.

STOP TYPING THAT ANGRY COMMENT!!!  Hear me out first!

Obviously, many of us want more that just half of one guideline revised, so that isn’t necessarily going to be seen as a big “concession” by some of the most ardent opponents of the guidelines.  But it’s still something significant.  And as I said in Part 4 of this blog series, the more guidelines we try to pressure the studio(s) into revising at one time, the less likely we are to get anywhere.  So let’s start with one (or half of one) and see if we can get SOMEwhere.  And if we can…

THEN!  We have to hold up our end of the negotiation.  Without the carrot, the stick is meaningless.  If CBS and Paramount make this goodwill gesture, then we need to respond with our own gesture of good faith and subscribe to All Access…at least for one month to try it out.

And really, that’s all I’m asking for.  If we can get the studio(s) to revise this one half of one guideline, and if you live within the U.S. or Canada, subscribe for just ONE month.  Give Star Trek: Discovery a chance.  That’s OUR good faith gesture.  And if you don’t like the new series or feel that more guidelines still need to be changed, then cancel your subscription after that first month and go back to protesting.  Or maybe you might just end up liking Discovery.

And in the end, that’s what CBS is most hoping for: that fans will try out All Access, like Discovery, and remain subscribers.  So we’re actually offering a pretty attractive carrot—even if our members just subscribe for one month in exchange for one-half of one guideline—because it could turn into something more.

Unfortunately, lately SMALL ACCESS has become a nexus for CBS and Discovery bashing, which it was never intended to be.  There are folks in our group who are dead set against supporting CBS in any way or ever subscribing to All Access.  And if it turns out that most or even a good portion of our members are unwilling to subscribe to All Access for even one month—even if CBS agrees to revise our group-selected Guideline #1b—then there goes our carrot!

And so I am posting one more survey because I have to know: will members of SMALL ACCESS act in good faith and subscribe for a month if CBS revises Guideline #1b as I’ve proposed above?  If not, this could be the end of SMALL ACCESS because there wouldn’t be much sense trying to get the guidelines revised by simply griping about them and about Discovery all the time.  We’ve already been doing that for nearly a year, and it’s had no effect.

In my opinion, this is our one shot at being heard and making an impact…and the window of opportunity is rapidly closing.  Star Trek: Discovery will likely premiere in just a few more months.  CBS wants to maximize subscription totals for the shareholders.  Once that moment passes, I doubt we’ll get a second chance.

So what do you think?  Are you willing to pay $5.99 for one month to change the most troubling of all the guidelines?  Make your voice heard by voting here.

17 thoughts on “FAN FILM GUIDELINES: Reality Check (Part 6) – The CARROT and the STICK”