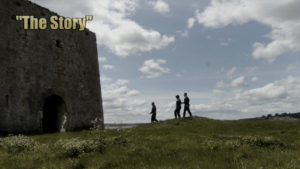 My favorite Scottish Trek fan series (well, the ONLY Scottish Trek fan series that I’m aware of) has finally reached an even dozen fan film releases.  This is even more amazing when you consider that STAR TREK: INTREPID released its very first fan production waaaaaaaay back in 2006 (a dozen years ago) but actually began working on that first episode as far back as 2003!  (And yeah, I’m working on a “History of Star Trek: Intrepid” blog with show-runner NICK J. COOK right now.  Look for it soon.)

Aside from the awesome accents (I love a good Scottish brogue), one of the best things about this series, making it stand out from so many American Trek fan films and series, is the wonderful scenery that Intrepid features whenever they shoot on location.  This latest episode, “The Story,” is no exception, with most of it filmed in what Nick Cook says is “…an old Limekiln in a place called Boddin Point.”  (Whatever a limekiln is!)  “It’s technically an unsafe building,” Nick continues, “because it’s quite badly eroded into the sea.  But we like to live dangerously.”

You can watch the previous eleven Intrepid episodes here on this YouTube page.

And now, please enjoy the latest offering from that magical place that brought the world the sports of both Golf and Curling, the Loch Ness Monster, and the first and best James Bond…

2 thoughts on “INTREPID releases their TWELFTH fan film: “THE STORY””