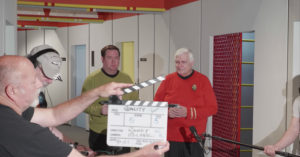 The TOS-era sets, originally constructed for the fan series STARSHIP FARRAGUT and STAR TREK CONTINUES, were purchased by Ray Tesi (show-runner for STARSHIP REPUBLIC) late last year from STC‘s VIC MIGNOGNA.  After checking with CBS Legal and receiving guidance, Ray has opened up the Kingsland. GA sets to any Star Trek fan film project that agrees to follow the fan film guidelines and first submits their script for review and approval.

Although I’ve published a couple of recent interviews with Ray Tesi, things do seem to be moving quite quickly forward with this amazing fan film resource.  So I had yet another brief chat with Ray, mainly curious about how Dreadnought Dominion got their project scheduled and filmed so quickly and how things are progressing with other fan productions at Stage 9.

Please note, I’ll also have an upcoming interview with GARY DAVIS and RANDY WREN of Dreadnought Dominion about “Reality Check” as well as other planned projects.

And speaking of “Reality Check,” before we start our brief interview today with Ray, I invite you to take a look at this unique, tongue-in-cheek fan film that cracks through the “fourth wall” and has some important things about why fans make these films in the first place…

And now, let’s hear what Ray has got to say today (yay!)…

JONATHAN – Hey there, stranger.  It’s been a while, hasn’t it?

RAY – About three weeks, I think!

JONATHAN – Well, I didn’t expect to see the first fan film from Stage 9 Studios out so quickly, dude?  So when did this shoot for “Reality Check” take place?

RAY – The group filmed “Reality Check” on Saturday, May 19, and also did some pre-production work on that previous Friday.

JONATHAN – That was pretty much the same time as I was I interviewing you about your announcement of opening up the TOS sets to fan films.  How did the folks at Dreadnought Dominion even know they could film there, let alone get a shoot scheduled?

RAY – Gary Davis and I had been talking about the studio and Dominion for months, so this was long in the works. About a month before the shoot, Gary submitted a final script and offered me a part in the production as the “faux director” behind the scenes. So I was looking forward to not only witnessing the first fan film shot in the new studio but actually BEING in “Reality Check”! Unfortunately, I had a family situation that was more immediate, so I was not able to be there at the shoot. But there are more opportunities on the way!

JONATHAN – So Ray, if you weren’t there for the filming, who unlocked the doors for them?  Who makes sure the sets are treated properly when you’re not there?

RAY – I have a great crew working for me in Kingsland who have worked on various iterations over the past 8 years in both construction and production. ROYAL WEAVER heads the group, as well as SAM ROOKS and SCOTT GRAINGER. They have been there through Starship Farragut, Star Trek Continues and now Stage 9. There are about four or five other players in the group, but Royal, Sam, and Scott champion the studio.

JONATHAN – If I might ask, did Dominion pay the cost for electricity while they were there?  If so, how much was their donation?

RAY – Early on, Gary offered other services to the studio by way of donating set pieces (including a new captain’s chair), and I reciprocated (in Dominion’s case) to exchange this work for studio time.  However, they were generous enough to contribute a donation to both the studio and to the studio personnel.

JONATHAN – Have any other fan productions booked time on your sets yet?

RAY – Dominion will be back in January, a production called USS Yolandi is scheduled for September 2019, and there are a number of other productions in the planning stage. Part of the studio rules is that a production submit a completed script prior to setting a film date, so I imagine they’re coming!

JONATHAN – Changing subjects slightly, I was a little worried about having those set pieces at Megacon in Orlando last month.  Did they survive the trip?  How did the convention weekend turn out?

Everything (and everyone) survived and Megacon was a rousing success! Royal and Scott have been through this before. In 2017, Vic Mignona had put the STC bridge pieces on display at Supercon in Ft. Lauderdale, so Royal and Scott knew exactly what to do and what to expect. I did not. But Scott championed the effort and spearheaded the breakdown and setup of the bridge pieces. It was a lot more work than I imagined, but it made its way to another galaxy!

RAY -Megacon was more a success than I imagined or could have hoped for!  And I realized something during the four days we were there. Many of us who are Trek fans have been to conventions, met actors, watched on TV and the movies, and some of us have been fortunate enough to visit sets and make our own fan films. But we forget that there are so many more fans who have not had that opportunity in their lives

It was incredible to see that an overwhelming number of people would come to our boooth and get overwhelmed. Some people wept, some were in awe, a few actually knelt down in front of the helm!  But everyone was gracious and appreciative. I shook a lot of hands, got way more hugs than I thought, and everyone thanked us. It was inspiring.

JONATHAN – Well, that is awesome!  I can’t wait to hear more news from Stage 9.  Keep us posted, Ray.