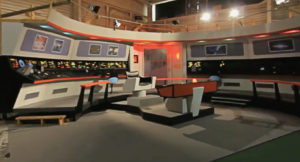 Back in February, the fan film community was ecstatic to hear that RAY TESI of Florida had purchased the TOS sets that had been previously used by the fan series STAR TREK CONTINUES and STARSHIP FARRAGUT.

Prior to that, fans had been very worried since these incredible sets—used for nearly two dozen fan productions—were costing VIC MIGNOGNA a reported $5,000/month in rent to house and maintain.  Nobody wanted the sets tossed into a dumpster, but with a price-tag of $60K per year and no way to monetize them because there’s already a licensed Star Trek Set Tour in upstate New York, it was unrealistically expensive to keep these sets around.

Enter Ray Tesi, who had funded and produced a fan film vignette called STARSHIP REPUBLIC “Serpent of Yesterday“back in 2017.  Ray bought the sets, and will be using his retirement savings to pay the rent (Ray tells the behind-the-scenes story in this audio interview).  Keeping the name STAGE 9 STUDIOS (previously used by Star Trek Continues for the Kingsland, GA facility), Ray has announced his intention to open the sets up to other fan filmmakers in much the same way that STARBASE STUDIOS had been doing since 2011.

There were, however, a couple of big unknowns.  The first was a reaction by JAMES CAWLEY reported on Trekzone Spotlight (at the 18:10 mark) that James was concerned that Ray’s offering the Stage 9 TOS sets for fan use would compete with James’ exclusive set tour license.  The second unknown was how CBS would react.  They are okay with Star Trek fan films as long as they follow the guidelines.  And so far, CBS has been okay with Starbase Studios offering their TOS sets in exchange for fan productions paying only for the electricity they use while shooting there.  But would CBS continue to look the other way for a second studio full of TOS sets?  Ray didn’t want to take a chance, so he contacted CBS directly.

This weekend, Ray has taken a few of the set pieces to MegaCon in Orlando, FL to display publicly and announce that Stage 9 Studios is now open to fan projects.  So what did CBS say?  And what are the logistics for fan films to use these sets going forward?

Time for another Fan Film Factor interview with Ray…!

RAY – Thanks, Jonathan.  Always fun to chat with you.

JONATHAN – Likewise.  So before we get to your contacting CBS, I want to ask you about taking some of the set pieces to MegaCon.  Isn’t that a little risky?  Which pieces are you taking?  Have the set pieces ever appeared at a convention before?  How did this little exhibition/excursion come to be?

RAY – Funny story. I had written three emails of inquiry to three area conventions asking for a table to promote Stage 9 Studios. MegaCon replied and, in their acceptance message, asked if I had any plans for photo ops. It hadn’t occurred to me to do that, and I remember thinking, “What a great idea!”

After a few failed thoughts on what to bring, Vic suggested the bridge display (captain’s chair, helm console, and the island platform they sit on) as he had displayed them the year before at Florida Supercon. While there’s a small risk with transporting them, a public display makes sense: it helps promote the studio and allows fans to see actual TOS set pieces.  And as far as I’m concerned, it’s all about the fans!

JONATHAN -Okay, just tell them to be CAREFUL!!!  <laughs>  Okay, on to CBS…whom did you contact, and what did they say?

RAY – I reached out to John Van Citters at CBS Licensing, and then I heard back from CBS Legal.  I received the reply I was both expecting and honestly hoping for. I was reminded that CBS Studios, Inc. owns rights to the original television series and has licensed the Star Trek Properties in connection with a wide range of products and services, and that any use of the sets must be non-commercial and not-for-profit.  That’s not a problem at all because it has always been my intention from day one not to attempt to make Stage 9 Studios a profitable venture in any way.

Also, CBS made clear they expect and require that all fan films produced here must adhere to their fan film guidelines.  That’s also a no-brainer for me, as I want to be completely respectful of Star Trek and of CBS’s IP and existing licensing agreements with others.  I have no problem making sure that the fan films that use the Stage 9 sets promise to comply with all of the guidelines. 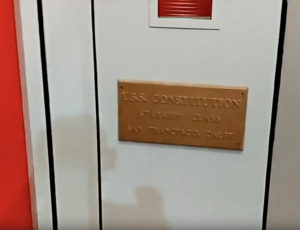 I’d like to mention that we’ve removed the plaque on the bridge that said “USS Enterprise.”  We did that because we believe that the stories of that starship and crew have been told, and told well.  It’s our way of showing our respect for CBS’s IP as much as we can while still having all of the sets.  Instead, we’ve currently hung a plaque that says “USS Constitution.”  However, we can also replace it with other plaques for Republic, Intrepid, Hood, Defiant, Excalibur, whatever fans want for their films.  We’re just leaving Enterprise for, shall I say, others to keep.

JONATHAN – So let’s imagine that I’m a fan producer, and I want to use your studio and TOS sets to film my project, say, on August 1 of this year. Whom do I contact, and what do I need to do before I can use them?

RAY – All information about using the studio for fan film production is posted on our home page: www.stage9studios.com. Folks can also feel free to contact me directly at ray@stage9studios.com.

In short, booking will be handled by Kent “Words” Edwards and Vance Major, both of whom have extensive experience with  Starbase Studios, which operated in a very similar way to how we want to handle things.  For example, in lieu of having people pay us set pricing to “rent” the studio and having us invoice them, Stage 9 will simply ask for a donation for the use of studio time, cleaning, prep, electricity, etc. that will go directly towards “keeping the lights on.” The goal is to make the studio accessible to anyone who wants to use it and not be restricted by cost.

Also, and very important for anyone wanting to film here, all potential Stage 9 Studios productions must first submit for our review a completed script that adheres to the CBS guidelines.

Oh, and you might want to wait until after the summer to book the studio.  There’s no air conditioning, and Georgia can get pretty hot in August!  Likely, we’ll try to schedule our studio bookings mainly during the cooler months. 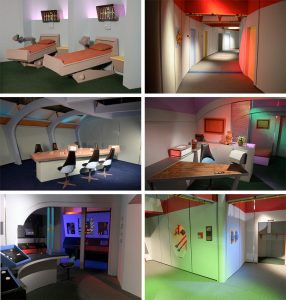 JONATHAN – Has anyone expressed interest in filming there yet?

RAY – Yes, which is surprising given that we have yet to make an official announcement. We have 6 or 8 inquiries, and we filmed a short the weekend of May 18-20. All good news!

JONATHAN – Wow, that’s pretty quick!  I guess you are filling a need in Star Trek fandom, Ray.  So will you be offering any add-on resources like studio lights, sound equipment, costumes/uniforms, or props…something that Starbase Studios did for the fan productions that filmed there?

RAY – Yes. The studio is fully functional in terms of recording equipment, should a production require it, as well as having an in-house green screen facility.

RAY – We also do have some add-ons like props and costumes which can be borrowed at no extra charge, although we would prefer the production supply their own costumes to allow for proper fit and wear-and-tear. All we ask is that the production’s cast and crew be respectful of the sets and supplies.

JONATHAN – Ah, I think you just read my mind, Ray!  My next question was about potential damage to the sets.  What happens if somebody who is filming at Stage 9 Studios breaks one or more of the set pieces?  Will there be a refundable security deposit?  Will you carry insurance, and if so, what kind?  And do you have people available to fix damage and/or simply maintain the sets going forward?

RAY – Yes to just about everything you just said!  We will indeed be asking for a refundable security deposit against damage and repair, and we have our own crew to maintain a careful eye on the use of the sets. We also carry full liability insurance for both film productions and for the general public to cover any injury.

In the event that any equipment is damaged, I’m happy to report that many of the people who have helped in the construction of the studio over the last six years have stayed on with Stage 9. They have proven themselves to be an invaluable resource and a bevy of information! I also have to say that their support and enthusiasm at keeping the studio open and intact has been an overwhelmingly positive byproduct for me.

JONATHAN – That is totally awesome.  So are you planning any improvements or expansions/extensions of the current sets?

RAY – Well, remember that there isn’t much space left to expand or construct anything too big.  But we’ve got a few things in mind, like building a brig and finishing up a shuttlecraft interior.  I’m also thinking about possibly building a view screen for the bridge.  Right now, there’s only five stations and the turbolift.  Any shots of the view screen that Star Trek Continues did were created with CGI.

I’ve also got a few things in mind that I’m not ready to talk about yet, but I made a walk-through video showing a lot of the work we’ve been doing to get the sets back in tip-top shape for filming…

JONATHAN – Great video!  Man, I need to get myself to Georgia!

JONATHAN – Oh, you’ll be hearing from me, Ray, count on it!  So I guess you’re still planning to complete your own Star Trek fan film, Starship Republic.   Where does that project stand at the moment?

RAY – Yes indeed!  A rewrite has been completed and is being evaluated.  It takes into account the original plot and circumstances of our vignette “Serpent of Yesterday,” and adds in a number of unexpected twists and turns.  We hope to be in the studio filming late this year.

JONATHAN – Please take lots of production photos so I can run them in a blog update.

JONATHAN – Okay, anything else you’d like to report before we wrap things up?

RAY – Yes. We’re planning on having an Open House event at the studio the weekend of October 6-7 (Columbus Day weekend). Much like Starbase Studios’ Promenade-a-con, fans will be able to visit the studio at no cost, wander through the sets, sit on the bridge, take selfies, and who knows what else! Fans can check out information about the event on our website, along with information about the Kingsland, GA area including transportation, food, lodging and nearby attractions.

We’d also like fans to know they can find us on social media, as well, at…