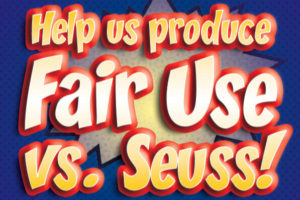 Have you ever given a few bucks to a street performer?  Maybe it was a guy juggling bowling balls while riding a 10-foot high unicycle…or a woman playing seven different musical instruments at the same time.  The reason you might drop a few coins or dollars into their hat is that these folks entertain you.  They’re talented, and they use those skills to bring some fun and joy into your day…and maybe show you something you probably don’t get to see very often (if ever).

What does any of this have to do with the proposed Oh, the Places You’ll Boldly Go! illustrated book mashing up Star Trek with Dr. Seuss?  As you probably know, an infringement lawsuit was filed by Dr. Seuss Enterprises (DSE) against creators DAVID GERROLD, TY TEMPLETON, and ComicMix, which intended to publish the book.  (To learn more about the lawsuit, read my latest update from a couple of weeks ago.)  Recently, ComicMix launched a GoFundMe campaign to raise money to help pay the costs for their legal defense.

Obviously, the goal of Oh, the Places You’ll Boldly Go! is to bring some joy and fun into YOUR day…entertainment for Trek fans that will certainly never happen if the verdict in this lawsuit goes against ComicMix and “Team Mash-up.”  But to make things even more entertaining, ComicMix’s own GLENN HAUMAN wrote the whole GoFundMe description ENTIRELY IN RHYME.  (Seriously, check it out…it’s pretty amazing!)

But Glenn’s not done rhyming yet…!

As many of you know, I’ve been very interested in this lawsuit, having written a series of blogs over the past year covering the fascinating, often-unexpected developments and rulings that have emerged.

So naturally, when I saw the new GoFundMe, I reached out to Glenn and asked for an interview.  Glenn has a very extensive pedigree as a Trek and sci-fi fan, having worked on Star Trek CD-ROMs and e-books for Simon and Schuster and co-authored the story “Redemption” with Lisa Sullivan for the Star Trek: New Frontiers anthology No Limits.  Oh, and Glenn also had the first-ever Klingon/Jewish wedding…so he’s no stranger to mash-ups!  (You can read about all of Glenn’s sci-fi/comic professional accomplishments here.)

Glenn agreed to the interview, and so I prepared a series of in-depth questions.  To my surprise (and delight), Glenn’s answers came back written—once again—entirely in rhyme!

Trust me, guys, that is NOT an easy thing to do (I’ve tried it).  In fact, it’s why I brought up street performers.  Whether or not you agree with the cause of protecting the new art form of the mash-up (something I thoroughly endorse!), I’d ask you to consider throwing a few bucks toward this GoFundMe if for no other reason than as a show of appreciation for the amount of work Glenn has put into writing up  these informative—and poetic!—interview answers…

JONATHAN – What is the current state of the lawsuit?  Are any motions by the parties are still awaiting the judge’s decisions/orders?

GLENN – Tom Petty said something that we took to heart,
cuz it’s true that “the waiting is the hardest part.”
We’re lining up witnesses that will rebut
the claims that Seuss made, and make ours clear cut.

We deposed Seuss’s president— a transcript I can’t see
on judge’s orders, it’s “Attorneys’ Eyes Only!”
As if DSE’s business faces grave risks
if exposed to me, David, Ty, or ComicMix.

Do we have other actions before the trial’s starting?
Sorry, that’s strategy we’re not imparting.

JONATHAN – Why is this particular case so important for people to pay attention to and, more importantly, to support both emotionally and (now) financially?

GLENN – People claim they want critiques, but only want praise—
and fair use protects us, as critiques abrase.
Thanks to copyright fair use, we all have the right
to comment, report, criticize, or make light
by citing their works—but some want to prevent
such usage by claiming we steal their content.

As it turns out, there’s just no precedent
about the expressions our mashups present.
Our case is a leading one, one which could stake
the boundaries of mashups you’re allowed to make.

In law, you don’t want to make bad first impressions—
and that’s why we HAVE to fight. Hence, no concessions.
If we lose, then ALL mashups may go through the thresher
and may be deemed infringement. (But hey, no pressure.)
Think! No more fan films, no visual arts
using any prior work—even small parts!
Even the lawyers here repping these clients
must admit artists stand on the shoulders of giants!

JONATHAN – ComicMix is currently trying to raise $25,000, with only 10% donated so far.  What happens if you don’t make your goal?  Does ComicMix have to give up and be found liable?  Do you go bankrupt trying to pay legal fees?

GLENN – It’s tough to say now, if we don’t make our goal,
how much deeper we have to go into the hole.
We scrape day by day, feeding our legal fund,
in the hopes in this area we’re not outgunned.
We’re a little surprised other businesses that
make their money from mashups haven’t dropped in the hat.
TeePublic, RedBubble, Funny Or Die,
Threadless, Ript, TeeFury—all of them, shy.
Do they think that they’re safe?  Do they think they’re immune
if deep-pocketed people don’t like their lampoon?

(We will say there’s a source of cash that looked inviting
But Seuss would claim that we were further inciting.)

JONATHAN – Why didn’t ComicMix simply try to purchase a license from DSE (and CBS) in the first place rather than risking a lawsuit?  (Sorry, gotta include some hardball questions, Glenn.)

GLENN – (The questions aren’t hard, it’s the rhyming that’s tricky—
it makes all my linguistic choices quite picky.)

Quite a reasonable question to put forth—and yet,
if we asked for a license, just what would we get?
We use no Seuss characters, plot’s been around
since Greeley told men to “Go west!” out of town.
They don’t own the meter, they don’t own the “font”
or art style, or anything else we would want.
We remind that for factor three, already pleaded,
the judge ruled that we used no more than was needed.
It seems like the privilege of not getting sued
is the license that DSE offers—quite rude.
To Dr. Seuss Enterprises, we’re unwashed—
they don’t want to license, they want our work squashed.
And this work is fair use! We don’t need permission!
We had creative license—and followed our vision.

JONATHAN – Considering that your original Kickstarter took in only $30,000 (before being shut down, and I’m assuming you got nothing), and you’re now looking for crowd-funding assistance to help fund your legal defense, haven’t you folks lost more money than you’re ever likely to make, even if you win?  Wouldn’t settling be easier, cheaper, and safer?

GLENN – Easier, cheaper, and safer sounds sensible,
but sometimes you have to stand up for a principle.
Why should we settle?  We’ve done nothing wrong.
Fair use was a thing before we came along.
And we don’t think that wealthy folks should use their money
to veto those parodies they don’t find funny.
Seuss does this a lot—I could mention a play
that they tried to shut down, it’s called “Who’s Holiday.“
The playwright fought back and he took them to court
and proceeded to use Seuss’s poor case as sport.
Seuss lost that case badly, on trial and appeal,
because New York courts wouldn’t fall for their spiel.
We hope for a similar outcome in ours,
well within judicial reason and powers.

JONATHAN – Do you regret saying the following in the Risks and Challenges section of your original Kickstarter?

“While we firmly believe that our parody, created with love and affection, fully falls within the boundary of fair use, there may be some people who believe that this might be in violation of their intellectual property rights. And we may have to spend time and money proving it to people in black robes. And we may even lose that.”

GLENN – Not at all, not a bit.  In the words of Jim Kirk,
“Risk is our business.”  We think that the work
is clearly fair use, and we think you’ll agree
as soon as a ruling allows you to see.

JONATHAN – I probably can’t ask you about your legal strategy, but couldn’t you avoid at least one of the trademark arrows by simply promising to change your typeface to something like this or similar…?

Or is it too late for that? (I ask because you haven’t actually published a book yet.)

GLENN – We sent final drafts early in our exchanges,
But they filed suit rather than ask for some changes.
“Clearly they don’t want to deal in good faith!
They’d rather suppress us!” At least, so we saith.
It seems that when it comes to matters parodic
DSE’s vision is really sclerotic.

Okay, following up on my previous comment, technically, aren’t you being sued for something you haven’t produced yet?  Isn’t that like getting a speeding ticket before you turn on your car engine?

GLENN – You noticed that too!  We’re not the only one
who sees Seuss is suing with no damage done.
As such, they’re claiming damage statutory,
an attack that we think is quite predatory.
We think that they’re making a bogus complaint
to justify such strong-armed prior restraint.

JONATHAN – And finally, what do you say to folks who call you “parasites” and tell you to “just create your own original IP” instead of stealing someone else’s?

GLENN – We’re not angry with them, we’ll live and let live
and remind them the judge ruled it transformative.
We wish we could show them the book (since it’s done)
And change their opinion to an informed one.
But sight unseen, their hot takes are made of
balloon juice… conjecture, and all speculative.
The judge, who HAS read it, found it creative.
It’s not parasitic… it’s more pollinative.

Glenn just put his all into a truly fantastic set of answers…
entertaining, informative, and downright inspired.
To me, this fellow should be truly admired!

If for no other reason than they’re trying their best,
to convince you they do pass that ol’ Fair Use test—
Can you look in your heart as they go to the mat,
And maybe, just maybe, toss a coin in their hat…?