Before you read today’s blog, you should really go back and look through this blog.  It tells the story, mainly in photos and short videos, behind the making of DECEPTION II, a sequel to the 2013 fan film Star Trek: Deception.  The first Deception told the story of two TNG-era Starfleet officers transporting a renegade Klingon prisoner in a lone runabout.  Writer/director/CGI master LEO TIERNEY constructed an actual runabout cockpit, giving this fan film an aura of realism that went along with excellent acting, lighting, sound, VFX, and other marks of quality.

The short eight-and-a-half minute  fan film became very popular, garnering tens of thousands of online views with little fanfare.  And shortly after its debut in mid-2013, Leo began discussing the production of a sequel.  However, the idea mostly languished until Leo briefly brought it up again on Facebook in 2015.  But even then, nothing much happened for nearly another year. 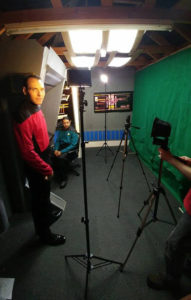 Leo began working in earnest on Deception II in 2016, and once again set out to construct actual physical (practical) sets—this time for both an Excelsior-class bridge and also for the bridge of a Klingon bird-of-prey.  And he constructed both…in a tiny garage!  This is where, if you haven’t already, you really, REALLY need to take a look at the blog I published back in February showing the amazing transformation of Leo’s garage into not one but two completely different sets…both using the exact same set pieces!  It’s one of the most fascinating blogs I’ve ever done.

There haven’t been many updates about Deception II since I published that blog, but ten months later, Leo finally released his long-awaited fan film last Friday.  And it looks simply amazing, especially considering the teeny-weeny size of the garage where the entire thing was filmed (see photo above).  Have a look for yourself…

I’ve been staying in touch with Leo Tierney over the months of post-production, awaiting the finished product.  As the premiere date approached, I conducted a little interview with my mate across the pond…

JONATHAN – So, Leo, where were you born, and where do you live now?

LEO – I was born in a small village in Bedfordshire, England, but I’m currently living up near Manchester at the moment.

JONATHAN – Did you study any aspect(s) of film-making in school?  Is that where you learned your skills?  Or did you pick them up elsewhere?

LEO – I studied Media while at college for about four years, where I learned as much as I could about filmmaking and made as many films as my spare time would allow…mainly VFX movies.  But I’ve always been fascinated with filmmaking and originally tried my hand at acting, spending a year studying Performing Arts before I moved onto Media, as I quickly found out I was far better behind the camera than in front!

I finished college about 11 years ago now and spent my time doing lots of different freelance and full time jobs since then, while continuing to learn more about filmmaking.

JONATHAN – What do you do for a living when you’re not making fan films?

LEO – I am currently a Senior Cinematics Artist at TTGames working on the latest Lego games…been there for about 6-ish years now.

JONATHAN – Cool!   So have you produced any films other than Deception I and II?

LEO – I have created quite a few smaller films in my time—nothing on the same scale as Deception II though…mainly short VFX tests that I would wrap a story around, and a couple of animated scenes too.

JONATHAN – So let’s talk briefly about the first Deception fan film.  Back in 2013, you made Deception I.  What made you suddenly decide to create a Star Trek fan film out of nowhere?  And why TNG-era?

LEO – At the time, there weren’t that many, if any, early-TNG fan films around.  And I realized that I had never created a Star Trek fan film before, even though I had a huge passion for filmmaking and Star Trek. I also had some spare time on my hands and wanted to test out using Kickstarter as a potential way to fund the project, which ended up working out pretty well!

JONATHAN – It took you nearly two years to even hint that you were starting work on Deception II, and another year until you found your “studio” (yeah, it’s a garage).  What happened between 2013 when you posted Deception to YouTube and 2016 when you finally started building your sets?

LEO – Has it really been that long…?

When I was finishing Deception I, as any filmmaker will say, I was constantly coming up with ideas for a possible sequel and how I could potentially improve upon the original.  So while I was working at a full-time job, I was also writing down a script and ideas for the film, as well as creating storyboards, pre-viz, and small models of the set to see how I much I could build…similar to the first film.  I was also securing actors, finding somewhere to film, and such.  So I guess I was pretty much in solid pre-production for about 3 years, while juggling normal life, such as moving house and work.

JONATHAN – What was it about Deception I specifically that made you feel so strongly that it needed a sequel? 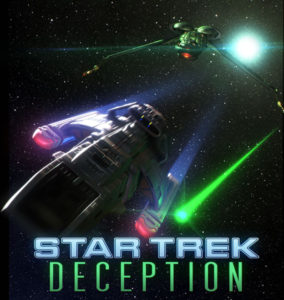 LEO – Well, I guess I was so amazed with how the original was received, and I felt I had an opportunity to carry on the story with these characters and see what happens…while also learning from what I might have done poorly previously and create something even better.  It also helped that I could point towards the original film when trying to pitch the idea to people and hopefully get them to join in the production.  It’s a lot easier to prove to people that you’re capable of creating a Star Trek film that people will watch when you’ve already done it beforehand!

JONATHAN – You had a successful Kickstarter back in 2013 where you raised £1,174 (about $1,500) from 75 backers.  One would think you’d have managed to raise significantly more after showing what you could do with just a little money.  So why did you decide NOT to crowd-fund Deception II?

LEO- I believe at the time when I was gearing up to start production, the Axanar lawsuit thing was going around, and I didn’t want to risk getting involved in all that corporate stuff…just in case.  So I made the decision to fund the entire film myself.  Apart from a couple of tools left over from Deception I and some very generous prop donations, I literally funded everything out of my own pocket.

JONATHAN – How did you find and choose your actors?  Were they familiar with Star Trek, or did you need to prepare them?

LEO – All of the actors are friends of mine that I have known from college or that I have worked with on jobs.  All of them have different amounts of acting experience and Star Trek knowledge.  Some would need to be told what a Romulan is, while others could tell you if your Klingonese translation was incorrect…which they did!

Luckily, everyone was a professional on this project and were very happy to dive into the characters, even if it meant putting their faith in my hands that it would all look good in the end…while they pranced around in front of a green screen!

JONATHAN – When last I did an update on Deception II, it was this past February.  You had filmed some scenes up through December and still had more to do.  What’s happened between then and now?

Next week, we get an answer to that question plus we learn about some of the biggest challenges Leo and his actors faced, what was the funniest thing that happened while filming, and how many hours Leo put into making a 15-minute fan film.  (Seriously, take a guess now and come back to see if you’re right!)  Oh, and will there be a Deception III?