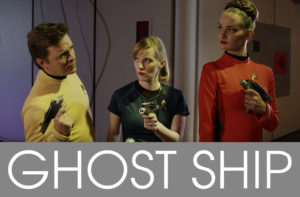 The vast majority of the fan film community had no idea that GHOST SHIP was coming (including me)!  But just a few weeks ago, on Halloween, the newest full-length Star Trek fan production from JOSHUA IRWIN and VICTORIA FOX debuted on YouTube.

Although shot mainly on the STAGE 9 STUDIOS starship sets previously used for Star Trek Continues and Starship Farragut, I learned from interviewing Josh and Victoria that some scenes were also filmed at the Arkansas sets originally known as Starbase Studios.  Their visual FX were done by Trekyards’ CGI genie SAMUEL COCKINGS, who will soon be releasing Temporal Anomaly and Convergence.  Even VANCE MAJOR makes a cameo as the character Erick Minard.  So these guys definitely got around the fan film world to make their project.

And what an impressive production it is!  A “Star Trek meets The Walking Dead” mash-up, of sorts, the film combines spooky zombie horror tropes with comedic moments and fun characters to create a wonderfully enjoyable space adventure.  And it follows the guidelines completely, including dividing the fan film into two less-than-15-minute segments.  The cast is made up of trained actors along with a crew of experienced film producers.  The result looks great, sounds great, and is written, directed, and edited at a noticeably high level.

That might be one of the reasons that the views for Ghost Ship have exploded on Youtube.  When I conducted our interview on Wednesday of last week, Josh and Victoria were excited to see their total views had climbed over 8,000.  Well, guess what?  As I write this 8 days later, they’ve gone viral with more than 105,000 views!

Before I get to the fan and interview, let me take a moment to mention that GHOST SHIP and a growing number of other Trek fan films would not be possible without the generosity of RAY TESI, present owner of the TOS  sets in of Kingsland, GA.  Ray makes these sets available for free (well, the cost of electricity used during the shoot) to any fan filmmaker following the guidelines.  But the $3,000/month rent is paid out of Ray’s own pocket.

Currently, there is an opportunity for fans to contribute a little bit each month (even a dollar makes a difference) through a PATREON.  Right now, fans are donating $163 of that $3,000 monthly expense, but there’s always room for more help from our community.  To donate, go to:

Pretty good fan film, huh?  Want to learn more about how it was made, how long it took to complete, and where to go to find a dozen convincing zombies in southern Georgia?  Take a listen to this really fun interview with writer/director Joshua Irwin and producer Victoria Fox…

9 thoughts on “GHOST SHIP appears out of nowhere! (audio interview with JOSHUA IRWIN and VICTORIA FOX)”