In Part 1, I looked at some of the striking similarities between the two franchises LOST IN SPACE and STAR TREK.  And then I shared how my seven-year-old son and I absolutely LOVED the first season of the new Netflix reboot of Lost in Space, while I personally have been mostly disappointed with the new Star Trek: Discovery on CBS All Access (which I don’t let my son watch).

Yesterday, I provided an overview of why Jayden and I enjoyed LiS so much.  It made us cheer.  We rooted for the characters and wanted to see them get out of trouble and win.  On the other hand, during the first season of Star Trek: Discovery, I found myself caring very little about any of the crew or nearly all of the other characters on that show.

But enough with the generalities!  It’s time to provide some specifics of what I think LiS is doing right that Discovery is failing to do.  So let’s dive right in…

END_OF_DOCUMENT_TOKEN_TO_BE_REPLACED 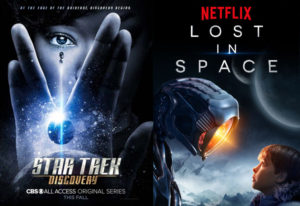 Like Star Trek, LOST IN SPACE recently returned to television after a long absence with a new series…available only through a paid subscription service.  Both shows are “darker” than their original versions, very expensive to make (about $8-$8.5 million per episode), and both are produced entirely in Canada (Star Trek: Discovery in Toronto and Lost in Space in British Columbia).

Both series debuted to very strong viewership numbers.  When the first two episodes of Discovery premiered on the CBS network, 9.6 million people watched.  When LiS debuted on Netflix, Nielsen estimated that 6 million people watched it in the first three days alone and that 1.2 million binge-watched all ten episodes during that time.  More viewers—such as myself and my 7-year-old son Jayden, watched LiS several weeks later over the course of many nights.

While it’s not known how many people are watching Discovery (CBS keeps those numbers locked up tighter than the gold in Fort Knox!), estimates are that about 300,000-500,000 subscribers view Discovery on All Access with more watching on Space TV in Canada and on Netflix in other countries around the world.  And despite mixed reviews from both critics and fans, both series have now been renewed for a second season.

So those are their main similarities.  But what about their differences?  And what is it about those differences that leaves me so much MORE enthusiastic about the new Lost in Space than I am about Star Trek: Discovery?