Like Star Trek, LOST IN SPACE recently returned to television after a long absence with a new series…available only through a paid subscription service.  Both shows are “darker” than their original versions, very expensive to make (about $8-$8.5 million per episode), and both are produced entirely in Canada (Star Trek: Discovery in Toronto and Lost in Space in British Columbia).

Both series debuted to very strong viewership numbers.  When the first two episodes of Discovery premiered on the CBS network, 9.6 million people watched.  When LiS debuted on Netflix, Nielsen estimated that 6 million people watched it in the first three days alone and that 1.2 million binge-watched all ten episodes during that time.  More viewers—such as myself and my 7-year-old son Jayden, watched LiS several weeks later over the course of many nights.

While it’s not known how many people are watching Discovery (CBS keeps those numbers locked up tighter than the gold in Fort Knox!), estimates are that about 300,000-500,000 subscribers view Discovery on All Access with more watching on Space TV in Canada and on Netflix in other countries around the world.  And despite mixed reviews from both critics and fans, both series have now been renewed for a second season.

So those are their main similarities.  But what about their differences?  And what is it about those differences that leaves me so much MORE enthusiastic about the new Lost in Space than I am about Star Trek: Discovery?

Amusingly, Star Trek and Lost in Space have been “rivals” ever since the 1960s.  In fact, legend has it that CBS bought Irvin Allen’s Lost in Space while rejecting Gene Roddenberry’s Star Trek just a few weeks later.  Apparently, CBS felt that the story of the marooned space family Robinson would be much more commercial than the missions of the starship Enterprise.  (Ironic that CBS now owns Star Trek and is enjoying the financial benefits of commercializing it 52 years later!)

Both original series were canceled after only three seasons, and both had their fair share of cringe-worthy moments.  Half a year before a sexy space babe in go-go boots surgically removed Spock’s brain, Dr. Zachary Smith was being attacked by a giant carrot who sounded a lot like Cyrano Jones (yes, that carrot is the late Stanley Adams)…

Both series lived on in reruns throughout the 1970s and later made the jump to the big screen, although Star Trek had MUCH more success at the box office.  Both franchises enjoyed comic book runs, merchandising, fan clubs, and saw many of their cast members appearing often at conventions.  And while no one would argue that Star Trek is well in the lead over Lost in Space in nearly every category of success imaginable, I now find myself looking forward much more to the second season of the new LiS than to the second season of Discovery.

So what did LiS do that Discovery didn’t?

The answer to that question has many facets.  First, of course, is the fact that LiS is a complete reboot, a totally new reality.  Although the character names and relationships are still the same (mom, dad, three kids…plus Dr. Smith and the Robot), the original destination is still Alpha Centauri, and there’s still a Jupiter 2 spacecraft and a “Chariot” land rover (both of which are totally awesome designs, by the way) —here come the SPOILERS!!!—this time the Jupiter 2 is just one of many landing craft that flee the colony ship Resolute after it is attacked by that  very same Robot (this time an alien-built machine).  Other colonists have also survived to reach the surface, which allows for a much more diverse and expansive cast. 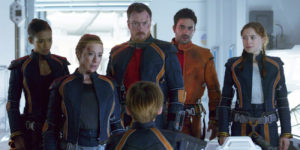 Discovery also went in ways that were noticeably different that its predecessors—notably the new look of the Klingons, unusual Starfleet uniforms, and technology that mostly doesn’t match what came before in televised Star Trek.  But instead of “starting over” in a new reality or timeline (like the J.J. Abrams reboot films did) Discovery’s writers and producers hold firmly to their assertion that this is all happening in the “Prime” Star Trek timeline, and that in another ten years, the starship Enterprise, the uniforms, the Klingons…everything will look just as it did during those original 79 episodes of TOS.

Is that why I like LiS more than Discovery…because LiS did a clean reboot and isn’t pretending to be something it’s not?  Perhaps a little, but no, that’s not my main issue.

Am I angry because I have to pay a separate $6/month to watch Discovery on CBS All Access, while I’m already paying for Netflix and can just watch LiS there along with so many other great sci-fi programs (Stranger Things, anyone)?  Again, a little.  I would definitely have preferred that the new Star Trek have simply been licensed to and produced by Netflix—as Marvel is doing with their Defenders superhero shows—rather than used to prop up an otherwise anemic line-up on All Access.  But again, not the main problem.

Here’s my BIG problem: Discovery has never made me stand up and cheer.  Discovery hasn’t put me on the edge of my seat.  The new Lost in Space has done just that…several times, in fact!

The whole reason I decided to write this blog is that last month, as my son and I were watching the season finale of LiS, and as the episode reached its exciting climax rescue (no major spoilers here, you’ll know it when you see it), Jayden jumped up and shouted, “OH, YEAH!  DID YOU SEE THAT, DADDY???  I WANT TO WATCH IT AGAIN!!!” 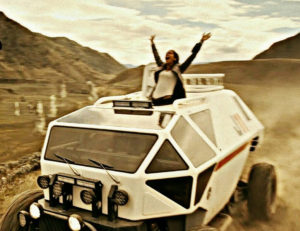 And we did.  And we cheered again.  We’d actually cheered a few other times during some earlier episodes, too.  The danger (Will Robinson!), the suspense—from the writers to the actors to the directors and producers—everyone pulls it off amazingly well.  This is a show about human beings surviving everything a hostile planet can throw at them—through strength, through intelligence, through bravery, through perseverance and faith, both individually and together…overcoming not just challenging circumstances but also self-doubt and weakness.  This is a show about what it means to be human (and it doesn’t need any long-winded speeches to do that).

My son and I found ourselves repeatedly rooting for the heroes of this show.  We literally feared for their survival.  And when they triumphed, cheated death, and lived to fight another day, yes, we cheered them.  But none of it would have worked at all if we didn’t…

…CARE about the characters.

I can honestly say that, were the USS Discovery to suddenly disappear into a black hole, I wouldn’t really miss anyone on the crew (no, not even Tilly).  The one guy I even cared about a little had his neck snapped by a Klingon sleeper agent.  So no, I’m not really emotionally invested in any of those characters.  I wouldn’t want to be friends with them or even serve on the same starship as that crew.  Gimme Kirk and company, Picard and company, Sisko and company, Archer and company (well, mostly)…heck, even strand me in the Delta Quadrant with Janeway and company.  Just don’t assign me to Discovery!

Granted, it’s not like everyone on the Jupiter 2 is perfect either!  I think the writers pretty much fumbled the ball with the character of Don West, who is a great pilot but is also smuggling contraband to Alpha Centauri.  Think Han Solo but less charming.   Dr. Smith is a mentally unstable, borderline-psychopathic, potential murderer.  I totally hate her.  On the other hand, I think I’m supposed to.  I’m probably supposed to hate the Mirror Universe Empress Georgiou, as well, but that character just makes me yawn.  I feel neither love nor hate nor anything for her…and that, my friends, is my main problem with Star Trek: Discovery.

Tomorrow in Part 2, I dive a little deeper in the specifics.   What I’ve said so far was mostly generalities, but those only get me so far.  If I’m really going to justify why I enjoy Lost in Space so much more than Star Trek: Discovery, I’m going to need to provide some more concrete details about what LiS is doing that Discovery isn’t.  And I shall!

20 thoughts on “Why can’t STAR TREK to be more like LOST IN SPACE?! (review editorial, part 1)”