In Part 1, I looked at some of the striking similarities between the two franchises LOST IN SPACE and STAR TREK.  And then I shared how my seven-year-old son and I absolutely LOVED the first season of the new Netflix reboot of Lost in Space, while I personally have been mostly disappointed with the new Star Trek: Discovery on CBS All Access (which I don’t let my son watch).

Yesterday, I provided an overview of why Jayden and I enjoyed LiS so much.  It made us cheer.  We rooted for the characters and wanted to see them get out of trouble and win.  On the other hand, during the first season of Star Trek: Discovery, I found myself caring very little about any of the crew or nearly all of the other characters on that show.

But enough with the generalities!  It’s time to provide some specifics of what I think LiS is doing right that Discovery is failing to do.  So let’s dive right in…

As I mentioned in a Fan Film Factor blog a few months ago, there’s a tendency in Discovery to “write to the beats” (a rush to get to a major character reveal or breakthrough) and then make a mad-dash to set up for the next beat, and the next, and the next. The characters aren’t given a chance to breathe, to react to what just happened, to reflect…and through that, to better let the audience connect with them and start caring.

One example I gave was the crew’s lack of reaction to discovering that their captain had been a psychotic megalomaniac who didn’t think twice about trying to kill them all.  With the exception of a perfectly innocent bowl of fortune cookies being atomized into oblivion, we didn’t see any reaction from the crew trying to process and deal with their feelings of betrayal, self-doubt, regret, and even embarrassment for having given this man their blind loyalty for so long.  Wouldn’t you be curious how the Germans were feeling after the defeat of Hitler? 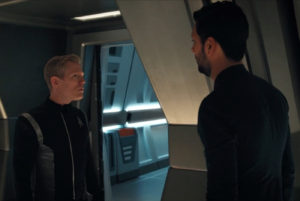 The second example was Paul Stamets’ reaction to the death of his lover, Dr. Hugh Culber. Again, what reaction? I’m sure Stamets mourned, but he did it entirely off screen! There was that one tense exchange with the now-VoQ-free Ash Tyler in the corridor, but aside from that, I have no idea how Paul is dealing with the loss of his pajama-and-toothbrush buddy.  Good television would have shown that.  Bad writing would simply be rushing to get to the season finale because we’ve got this really great last episode that takes place almost entirely in a brothel that needs to get written!

With Lost in Space, the show is all about the characters—their strengths and their flaws, their hopes and fears, their connections to others…their humanity.  And the writers give all of those things a chance to take root, struggle to grow, nearly shrivel and die, and ultimately bloom in triumph.  And because that gentle evolution is given time and room to develop, the audience can slowly and deeply bond with these characters.  Discovery rushes things so much that, as a viewer, I’ve never really connected with or even cared much about any of its characters. 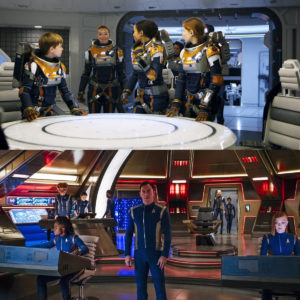 Another thing that I noticed about the way the LiS writers explore their characters is that they “mix and match” them often.  On Discovery…not so much.  Think about it.  Saru and Tilly got one significant scene together all season long.  Once Tyler came on board, he and Lorca had only a couple of scenes together one-on-one.  Saru and Stamets?  Stamets and Tilly?  Tyler and Tilly?  Unless Michael Burnham was also in the scene, most characters didn’t interact directly more than a few times…and usually only briefly before the episode would shift back into moving the main plot forward.

On LiS, however, because the characters behave differently with different people, I can describe them to you in so many rich and intimate ways that I can’t do with the Discovery crew…

Many of the various Star Trek series had this aspect, too.  Fans got treated to close friendships between characters like Data and Geordi, Bashir and O’Brien, Sisko and Dax, Kim and Paris, Seven and the Doctor, etc.  And not every relationship was buddy-buddy.  Look at Sisko and Dukat, Odo and Quark, Tuvok and Neelix…just to name a few.  But because viewers got to see these characters in so many combinations and situations, the writers could explore and discover numerous facets of their various relationships.

On Discovery, however, the characters feel mostly flat to me, two-dimensional.  Banter is minimal.  Close friendships are nearly nonexistent unless they involve Michael Burnham in some way (or the lost love between Stamets and Culber, VoQ and L’Rell, or Lorca and Cornwell).  And I realize that Discovery only had 15 episodes to develop these characters, but by episode 15 of Deep Space Nine or Voyager, for example, many of the best relationships had already been firmly established.  So small episode count is not an excuse.

Anyway, that’s what I think is missing from Discovery.  It doesn’t matter what the Klingons look like or how needlessly sparkly the Starfleet uniforms are.  When it comes right down to it, I simply don’t care about the crew of this starship.  I watch the show mainly out of loyalty to Star Trek and the momentum that’s left over from my many decades as an enthusiastic fan.

For the upcoming season two, I’m hoping that the writers of Discovery will find a way to make the show better…maybe by being more like Lost in Space.

In the meantime, I told my son three weeks ago that Lost in Space had just been renewed for a second season.  “YES!!!  I KNEW IT!!!” he shouted.  “How long until we get to watch it, Daddy???” Jayden urgently asked.  “Probably not for at least another year,” I replied. 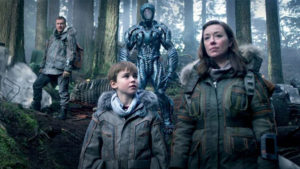 21 thoughts on “Why can’t STAR TREK to be more like LOST IN SPACE?! (review editorial, part 2)”