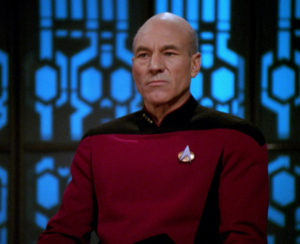 Earlier this week, someone played a practical joke on CARLOS PEDRAZA of axamonitor.com.  Many think it was ALEC PETERS or perhaps one of his associates (not me, people!), although it’s looking like a “he said/she said” situation.

In short, here’s what we know happened…

Axanar Productions is moving to a new studio in Atlanta.  Carlos Pedraza, for some reason, was pushing hard for any information he could find out about the new facility.  I was sent screen captures of the following two Facebook posts from Carlos, although there may have been more… 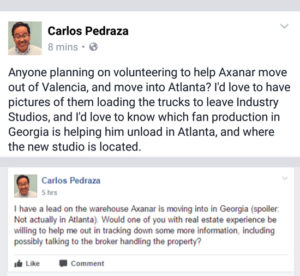 I’m not sure why it was so crucial for Carlos to get information about the new studio, but that’s not really important.  What is important is that, apparently, he found a “mole” willing to funnel him information from Alec Peters (despite Alec’s request to volunteers not to share information yet about the new facility).

I’ve since been told by a few detractors in comments posted to Fan Film Factor that the name of this mole is Brian Hartsfield, and on Wednesday at 1:46PM, he received an e-mail (allegedly) from Alec Peters saying the following…

END_OF_DOCUMENT_TOKEN_TO_BE_REPLACED 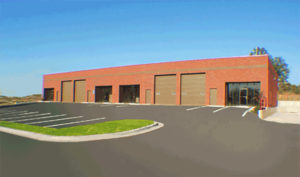 Yesterday, I was told by several folks to look at this posting from CARLOS PEDRAZA’s Axanamonitor.com blog site. In it, he had had the “scoop” on where the new AXANAR PRODUCTIONS studio would be located, how big it was, the amenities it offered and didn’t offer, and even photos of the outside and inside.

There was only one problem: that WASN’T the new studio.  It wasn’t the right building; it wasn’t even the right city!  Carlos listed the new location as Gainesville, GA: “…about 55 miles northeast of Atlanta, actually a bit closer to the South Carolina border than to Georgia’s capital.”

Now, I’m not sure where Carlos got his information from, but for the last two weeks, I’ve been preparing an interview with ALEC PETERS about the new Atlanta facility, and I already had a whole bunch of information and photos…and they didn’t match what Carlos had posted at all.  This seemed, to me at least, both curious and a bit troubling.  One of us had the wrong information…and I really hoped it wasn’t me!

So I contacted Alec.  I asked him if he’d made any last-minute changes to the location of the space that he’d be leasing.  He said no, he was still leasing the same place—the lease was signed, sealed, and delivered—and no, it was not the same one that Carlos was reporting on Axamonitor.com.

Then I asked Alec if he would mind moving up our interview so I could get the correct information disseminated before people started thinking that Axanar was moving into some dumpy building in an economically depressed town more than an hour away from Atlanta.

Originally, I was planning to publish my interview with Alec sometime next week when the moving trucks are supposed to arrive.  But I heard that Alec has a whole slew of local volunteers lined up to help unload the trucks and unpack things, and to be honest, I was worried that some of the volunteers might get confused and think they’d accidentally shown up at the wrong building…as the one in Carlos’ photo isn’t even the right color!

Anyway, Alec agreed to expedite his answers to my interview questions, and I just received them. So here is the CORRECT information about the new facility in Atlanta…