There can be spoilers…just for one blog!

I just finished watching the sixth and final SHORT TREKS of the second round of mini-episodes (do we call them “seasons”?). The shortest of all of the Short Treks thus far, the episode runs only 6 minutes and 47 seconds before the closing credits roll. But it’s time well-utilized!

It’s hard to know what to say first. In these editorial review blogs, I try not to just parrot what all of the other reviewers are saying because…what’s the point? Most reviewers are offering a summary of the episode. If you want that (and don’t mind the spoilers), then check out this review for a short summary or this review for a much more detailed recounting.

Many reviewers are concentrating on the kick-in-the-gut feel of the attack on Mars, and that was very obvious. This incident is going to be a paradigm shift for the Federation …just as the December 7, 1941 Japanese surprise attack on Pearl Harbor and the terrorist destruction of the World Trade Center on September 11, 2001 were for the United States and the world. Nothing would ever be the same again. After “Children of Mars,” the date that will live in infamy will be April 5—First Contact Day—and the culprits won’t be a foreign Pacific power or Middle Eastern extremists but these mysterious “Synths” (whatever they are).

A few folks are complaining that the starships at Utopia Planitia look more like movie-era or even Discovery-era designs rather than 24th century vessels. And yeah, the VFX guys probably kept things cheap and used the models they had on hand. Others complained that it was never really explained why these two girls initially hated each other (was it all just over a shoulder bump?), although I don’t think that was important for us to know. The impact of the story wasn’t why they were fighting so much as what made them stop.

So no, I’m not going to rehash any of that. Instead I am going to say something totally provocative and controversial:

I think GENE RODDENBERRY would have hated “Children of Mars” being presented as Star Trek.

And even more controversial:

I also think he would have been dead wrong!

END_OF_DOCUMENT_TOKEN_TO_BE_REPLACED

SP-SP-SP-SPOILERS…TURN AWAY OR FACE THE STRAIN!

This past Thursday, CBS All Access released (at least for viewers in the United States) the final two SHORT TREKS for 2019. You can read my reviews of the previous three episodes—“Q&A”, “The Trouble with Edward”, and “Ask Not”—to see that they’ve been a little uneven in quality (at least in my opinion) but generally worth the 8 to 15 minutes of time invested to watch them. Also, there’s one more Short Treks episode scheduled for release on January 9: a STAR TREK: PICARD prequel titled “Children of Mars.”

The final two Short Treks of this year marked Star Trek‘s first return to animation since the animated series aired its final episode 45 years ago on October 12, 1974. (Of course, I’m not counting animated Star Trek fan films, although if you’d like to see some really good ones, might I suggest Star Trek: Aurora, Stalled Trek, and Stone Trek.)

The two new Short Treks—“Ephraim and Dot” and “The Girl Who Made the Stars” were REALLY short—-just under nine minutes and just under eighth minutes respectively. This isn’t surprising, though, as animation is costly to produce both in terms of budget and time. Unlike live action, an extra four minutes for either episode could literally have increased the production budget by nearly 50%.

So what did I think?

Before I answer this question, let me tell you what my nine-year-old son Jayden—a lover of TOS and a current watcher of TNG—thought. This is actually a rather profound question. I have and continue to refuse to show STAR TREK: DISCOVERY to Jayden (with the F-bombs, the Klingon rape scenes, and generally not-for-a-9-year-old content) until he’s much older. In comparison, we LOVED watching the new Lost In Space together on Netflix (season two is just 10 days away!) and are currently enjoying The Mandalorian. As a Trekkie, it was frustrating not to be able to share the new series with my son.

But these two new Short Treks were 100% child-friendly. So having the opportunity to say to Jayden, “Hey, come over here and watch this and tell me what you think…” about the new Star Trek is a new and exciting experience for me.

So what did Jayden think…?

END_OF_DOCUMENT_TOKEN_TO_BE_REPLACED

WARNING! The reading of this blog WITHOUT first watching “Ask Not” WILL ruin an amazing experience for you!

It only took seven minutes and forty-five seconds.

Actually, it took even less time than that. Without the traditional SHORT TREKS opening title sequence, this latest offering of CBS’s series of mini-episodes dropped me immediately into the action. What followed was a whirlwind of masterfully delivered, impactful lines between two very strong characters. One was Captain Christopher Pike, and ANSON MOUNT could be taking a nap in a hammock and I’d still be mesmerized. So imagine what this amazing actor can do when the dialog is flying fast and furious…and lives are at stake.

The other is a brand new character, Cadet Thira Sidhu (played perfectly by Amrit Kaur), a young engineering cadet facing an impossible decision: does she follow Starfleet protocol or trust Pike? The answer is surprising, to say the least! It’s also the culmination of a tense, non-stop five-minute sequence that doesn’t leave the viewer any time or opportunity to ask “Hey, what’s really going on here?” And that was a very, very good thing!

This is where I start spoiling the episode, folks. Seriously, if you haven’t watched it yet, stop reading now, subscribe to All Access for 10 minutes, and watch “Ask Not.” Or if you’re in a country that hasn’t gotten the second series of Short Treks yet, bookmark this blog and come back to it in January. It’s not time-sensitive.

Okay, I warned ya. If you read further, the irreparable damage is all on you…

END_OF_DOCUMENT_TOKEN_TO_BE_REPLACED

I’m not sure I can forgive the creators of SHORT TREKS for eternally inserting a connection in my head between actor H. JON BENJAMIN and tribbles. I will never again be able to watch an episode of Bob’s Burgers or another ARBY’s commercial without wondering if those small, furry creatures somehow made it into their food menus. And if I’m ARBY’s, I am not happy right now.

But all kidding aside, I really wish this episode had put all kidding aside…or at least a good deal of it (tribbles do invite comedy, after all). But they didn’t. Short Treks is an experimental medium for CBS, and they’re to be admired for at least trying some new things. But as a fan, I felt the jokes landed as flat as a tribble falling off a desk and dying (something the episode actually mentioned!). And it does make me a little more wary about what kind of content we’ll be seeing from the upcoming new LOWER DECKS animated Star Trek series. If this is the level of humor we’re in for, well, I might be writing a bunch more critical blog reviews. Time will tell.

As with my review yesterday of the first of this season’s Shorts Treks, “Q&A,” I had a bit of a love/hate relationship with this episode…although sadly tipping more into the latter emotion this time out. For anyone who hasn’t had a chance to see the episode and wants to know what the heck I’ll be talking about, here’s an excellent review that includes a summary…along with some of the same annoying points that I’ll be kvetching about.

First, however, I’ll list the positives. I loved seeing Anson Mount‘s Captain Pike, even for just a few seconds. I also found it cool to glimpse a Trill. And it was nice to see the costume department finally getting a chance to create some Starfleet uniforms without the weird single collar.

Um, what else, what else? Let’s see…well, the lighting was lovely. The music was good. The acting was quite decent. And the tribble vacuum cleaner was a nice touch. Oh, and I did like them showing how your generic detractor of just about anything might be created, even two and a half centuries in the future…

But yeah, aside from that, this episode was hard to love….

END_OF_DOCUMENT_TOKEN_TO_BE_REPLACED

On October 5 and five days later on October 10, CBS released the newest two 15-minute episodes of SHORT TREKS to All Access subscribers in America (sorry, rest of the world): “Q and A” and “The Trouble with Edward”…or as I like to call them: the latest two fan films from CBS.

CBS was actually rather quiet about marketing the debut of these two Short Treks, releasing the first on the same Saturday they announced it would be available (during a presentation at New York Comic Con) and the second during Thursday Night Football later that week. In fact, the rest of the Short Treks will also be premiering during Thursday Night Football (as will STAR TREK: PICARD) because that’s when the majority of All Access subscribers are watching (don’t ask me how I know that). Here’s the schedule for the remaining new Short Treks:

Because CBS is targeting the sports viewers of All Access with these “15-minute commercials” more than they are the hard core fans, many folks weren’t even aware that Short Treks had already debuted. In fact, I took an informal poll on the Fan Film Forum Facebook group and discovered that 40% of our responding members had no idea any new Short Treks were available….

But since these two episodes have, indeed, been released, how about we do a good ol’ editorial review? Or rather, let’s make it a two-parter since there were two Short Treks…

END_OF_DOCUMENT_TOKEN_TO_BE_REPLACED 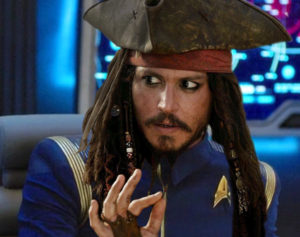 Have video pirates lost their enthusiasm for the new SHORT TREKS mini-episodes being released by CBS…and possibly for new Star Trek in general?  If so, then it’s a sorta good news/bad news situation for CBS.  The good news is that video piracy hurts the bottom line for CBS.  So if folks are downloading Discovery and Short Treks without paying a subscription fee (to either All Access or Netflix), that’s potentially money out of CBS’ pocket.  So less piracy is a GOOD thing, right?

It all began early last month while I was having dinner with a friend (who shall remain nameless) who illegally downloads Star Trek: Discovery and Short Treks.  For the record, I personally do NOT do this, and I subscribed to CBS All Access from October 2017 through February 2018.  Here’s my e-mail receipt from them… 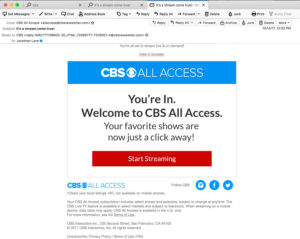 So just to be clear, I am NOT endorsing video piracy in any way.  This blog is simply looking at an existing trend from a journalistic perspective.  Video piracy (or any kind of digital piracy) is illegal and should not be attempted by anyone reading my blogs.

And now that that’s out of the way, back to my story…