Can you believe that TREKYARDS has been going on for nearly FIVE years??? Do you even know what Trekyards is? You don’t? Oh, man…are you missing out!

Trekyards is a Youtube channel with more than sixteen million views and 50,000 subscribers watching over two-thousand videos! STUART FOLEY (from Canada) and SAMUEL COCKINGS (from Great Britain) release new shows almost daily spotlighting the various ships and vessels from all eras of Star Trek and all genres of sci-fi…plus they do interviews and provide reviews of new episodes, old episodes, toys and collectibles…you name it, they talk about it with two different accents and often with other people from the Trek community (some of them famous)!

Of course, the vast majority of their shows are transatlantic, with the two hosts separated by space and time (well, timezones). But every so often, these two fellows meet in person. And while the universe doesn’t suddenly implode in some timey-whimey vortex of infinite impossibility, it does set one or the other (or both) back a decent amount for international air travel and lodging. In fact, the last time Stuart and Samuel got together for a Trekyards show, it was two years ago.

But over the next twelve months, Stuart and Samuel have FOUR different, special trips planned. But they need the help of supporters to make those events possible for them, and so they’ve set up an Indiegogo campaign to raise $12,000…

So where are they planning to travel to, and what will they be doing there?

END_OF_DOCUMENT_TOKEN_TO_BE_REPLACED

One of the fan productions I’m most looking forward to at the moment is MARK NACCARATO’s project focusing on the battles and strategies of THE ROMULAN WAR with Earth. Presented as a war documentary (similar to Prelude to Axanar), Mark’s stories will pick up where Star Trek: Enterprise frustratingly left off: just BEFORE the ware between the Coalition of Planets and the Romulan Star Empire began.

Leading up to the planned May 2019 premiere of the full fan film, Mark has released a series of short “enhanced” audio dramas called WAR STORIES. They typically present personal logs or subspace correspondence made by someone involved in the war, usually recorded by a trained voice actor reading the script. (I say “usually” because I am definitely not a trained actor, but I recorded one myself!) The releases, while available in audio format for listening only, are ALSO available on YouTube with added VFX and other graphics to look like Starfleet archival footage. They’re REALLY cool.

For anyone who hasn’t seen and heard these War Stories releases yet, you can view them all on this YouTube playlist. They are only 17 and a half minutes total, so it’s not even that much of a time investment. In fact, anyone who says you can’t tell a decent fan film story in 15 minutes or less NEEDS to watch these four productions, as they each do it in under five minutes! (Well, one is a two-parter.)

This is one of the few fan projects set in the NX-era. Another is the series of amazing and powerful short films produced by AARON VANDERKLEY in Australia. If you haven’t watched them yet, you should check them out.

Now Mark Naccarato and Aaron Vanderkley have joined forces for the latest War Stories production, “The Fighting Fourth.” So that’s America and Australia teaming up for the first time. BUT! Let’s also add in a third continent—Europe—as Britain’s own SAMUEL COCKINGS, the hardest-working Trekpert in geek fandom, has lent his talents with some amazing CGI animation. Just take a look at this trailer…

“The Fighting Fourth” will be released first to donors very soon. So if you’d like to see it early, contribute a buck or three to the still-active Indiegogo campaign (now funding post-production costs).

END_OF_DOCUMENT_TOKEN_TO_BE_REPLACED

For SAMUEL COCKINGS, the Harry Potter of CGI, it has truly been a long road getting from there to here. “There” was 2013 when he launched a Kickstarter to fund his fan film project, STAR TREK: TEMPORAL ANOMALY. A month later, he’d raised £1,741 (about $2,700) with 27 backers. Compared to some of the Trek fan films at the time, this was a “humble” amount, but it was enough to assemble half a dozen actors, get them into Stafleet uniforms, and film them in front of green screens for a nearly hour-long fan video movie.

And then five years happened.

To be fair to Samuel, he was doing anything BUT procrastinating during that time. His skills and resources were constantly expanding, and his abilities to create a better and better looking fan film around that green screen footage were growing by the day!

Early last year, however, just as he was finally planning to debut his long-awaited fan film, Samuel released a trailer that included footage of Picard, Riker, Worf, Troi, etc.—who would be in a short 90-second “prologue” to the film—and got the attention of CBS (and not in a good way). But rather than shut him down completely, CBS worked with Samuel to find a way that he could release his fan film and not have to toss all of his hard work. So…kudos to CBS for finally taking a chill pill.

Those CBS changes have required nearly ten months to complete, but now Temporal Anomaly is nearly ready to premiere later this month. And when it does, I’ve got a great audio interview with His Royal Trekness that you’re all gonna enjoy listening to.

But right now, in anticipation of the impending release of five and a half years of work and dedication, Samuel has posted a special video which takes a look back at the journey…including footage of himself from 2013 and his initial Kickstarter campaign plus comparisons of shots and CGI from back then with what we’ll see in just a couple more weeks. 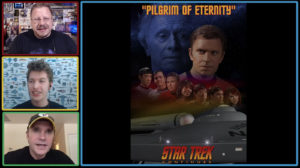 TREKYARDS is a force of nature in Star Trek fandom.  So is STAR TREK CONTINUES.  Put the two of them together, and there’s something really special in store for Trekkers!

Trekyards, for those who don’t know, is the brainchild of STUART FOLEY and SAMUEL COCKINGS.  Together, these two uber-fans have produced more than 500 webshow videos spotlighting ships from Trek and other sci-fi franchises, interviewing actors and production people from Star Trek, doing video podcasts, and filling the Internet with enough smart, funny, and fascinating content to eat up as much of your free time as you desire!

Star Trek Continues, as you undoubtedly know, was a cutting edge fan series that presented the final two years of the USS Enterprise‘s 5-year mission under James T. Kirk.  Using professional actors and technical crew, featuring noted sci-fi celebrities as guest stars, and displaying industry-level production quality on exact recreations of the TOS sets, STC set a standard of excellence seldom if ever matched in the realm of Trek fan films.

Although STC has completed its 11-episode run, fans still cherish this labor of love and the careful attention to detail that went into it.  And while STC has released a few special features here and there focussing on things like the music scoring, editing, and VFX—and Fan Film Factor published this exhaustively-researched complete history of STC—there hasn’t been a real “deep dive” into all of the  behind-the-scenes production secrets of this amazing series.

Until now, that is!

Trekyards is introducing a new webshow series spotlighting Star Trek Continues, hoping to cover EVERY fascinating detail of this beloved fan project with insight from those who produced it.  Up first, in a 20-minute interview about their first episode, “Pilgrim of Eternity,” Captain Kirk himself, VIC MIGNOGANA, talks about finding and convincing retired actor Michael Forest to reprise his role of Apollo, Vic’s feelings about other Trek fan series, and what gravity has to do with the color of the walls on the set!