PACIFIC 201 was initially crowd-funded with a $26K Kickstarter way back in September of 2015. The following year, an Indiegogo campaign raised about $32K more. So armed with more than $58K, Harrisburg, PA-based show-runner ERIC HENRY set off to make a fan film…and not just any fan film.

Pacific 201 is set in the year 2200, four decades after the Romulan War, and Earth is still hesitant to trust the galaxy.  The desire to explore space faded after the first few years of the NX program—helped along by the Xindi and Romulans—and was replaced with a fear that seeking out new life and new civilizations would result in them shooting at us.

But now Earth is just beginning to shake off its post-traumatic stress, and the starship Pacific NCC-201 is the first vessel in decades to head out with UESPA scientists aboard alongside Starfleet military.  Can humanity conquer its fears and truly embrace its destiny among the stars?

This push/pull of paranoia vs. positivity is put on display in one of my all-time favorite fan vignettes, which Eric released back in late 2016. (You can watch it here.) In this short film, the first officer of the USS Pacific is grilled by a talk show host who is anything but fair and balanced when it comes to restarting the exploration of space. The following summer, another Pacific 201 short vignette was released, featuring the new captain. (You can watch that here.)

All this time, the “coming soon” dates were coming and going with no Pacific 201. Most recently, in 2018, a series of images were released along with a promised release date of spring 2019. We’re now a year beyond that, and still no fan film. BUT!!! For the first time since 2018, new content from Pacific 201 has been released in the form of this intriguing new trailer…

In the meantime, I thought it might be a good time to check in with Eric Henry on what’s been taking so long, what still needs to be done, and whether there will be any sequels to Pacific 201 (once the first film comes out, that is!). Let’s hear what Eric has to say…

END_OF_DOCUMENT_TOKEN_TO_BE_REPLACED 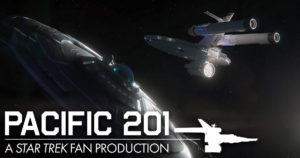 Yesterday, I shared the exciting news that the long-awaited PACIFIC 201 may not be awaited much longer.  A new teaser promises a release in the spring of 2019!

Pacific 201 was initially crowd-funded with a Kickstarter back in 2015, with an Indiegogo campaign the following year, giving show-runner ERIC HENRY more than $50,000 to make his fan film.  The principle photography wrapped up last year, and Eric has been deep into post production since then.

During that time, Eric has released some very nice-looking still imagery of his cast (the crew of the starship Pacific NCC-201), his sets, green screen, uniforms, patches, ship designs, and even a few visual FX.  In some of the images, you can even see ways in which Eric has digitally “extended” the sets with things like adding ceilings (which were not initially part of the sets that were constructed).

Yesterday I told you about Pacific 201.  Today, I’m gonna show you.

END_OF_DOCUMENT_TOKEN_TO_BE_REPLACED 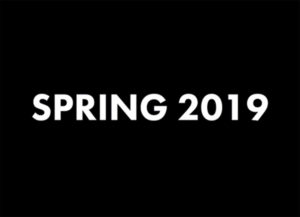 Fans have been waiting YEARS for this announcement!  Back in 2015, this eagerly anticipated Star Trek fan film held a very successful Kickstarter campaign, followed up by a separate Indiegogo campaign that raised additional funding for the production.  I donated to this project myself and have been an active and enthusiastic supporter of it for years.

Nestled between the end of the Romulan War and the start of Captain Kirk’s historic 5-year-mission, this fan production was described as tackling an “entirely unseen era of Star Trek history.”  New Starfleet vessels were designed in CGI, bridging the gap between the NX-01 Enterprise tech and the design of the starships like the Constitution-class.  The visual FX looked amazing!

Sets were built, costumes made, and scenes were even shot.  In fact, a short teaser was released to give a taste of what would be seen in the final production.  The VFX looked fantastic, and even though the brief 3-minute “vignette” mainly showed two characters talking to each other in front of a green screen-composited background, fans still got even more excited to see the finished project.

Donors were initially expecting this promising fan film to be completed and released in 2016, but circumstances intervened and made that impossible.  Eventually, the biggest challenge became trimming what was to be a feature-length Star Trek fan film down to just two 15-minute episodes…showing just the barest bones of the full story.

Unfortunately, money began to run out, many perks were not fulfilled because the final film wasn’t completed, and eventually there weren’t enough funds left to pay to store the sets in the studio where they had been built.  This meant moving them elsewhere and delayed things even more.

The planned 2016 debut was pushed back to 2017 and then 2018.  Some donors began to fear that the final film would never be completed.  But now, finally, there comes a definitive announcement from the show-runner that the completed production will be ready next year in spring 2019!

You’ve probably already guessed what fan project I’m talking about.  If you haven’t, here’s another hint.  The show-runner (who also wrote the script) has a four-letter first name that starts with a vowel and ends with the letter “c”.  His last name is two syllables and is really just another first name.

Aw, you know who I’m talking about by now!

END_OF_DOCUMENT_TOKEN_TO_BE_REPLACED

The long-awaited fan film PACIFIC 201 has nearly completed principle photography, but there have been some unexpected delays and challenges that have pushed things back and strained the project’ available funding.  Now on the cusp of finishing the filming of all the scripted scenes, the production is faced with the cost of moving their sets out of the warehouse that was being leased and into a new facility.  Moving will require $1,000…and the funds are needed quickly.

Pacific 201 still has an active Indiegogo page up, with $30,685 as I type this.  If you can spare anything—even just a little—it’ll make a BIG difference…

With physical sets and well-designed costumes, profession actors, and some awesome visual effects, Pacific 201 will be the first fan film (or any Star Trek film, for that matter) to cover the period smack dab in between the end of the Enterprise NX-01 era and the beginning of the Enterprise NCC-1701 era.

The time of Pacific 201 is the turn of the 23rd century, 40 years after the founding of the United Federation of Planets.  It’s a critical period for Earth, still reeling from the horrors of the Romulan War but just beginning to emerge from fear and paranoia with a tentative first step back into the exploring of strange new worlds.

Last week, I told you about the new crowd-funded independent  Deep Space Nine documentary WHAT WE LEFT BEHIND, which set a goal of $150K and is about to cross the $300K threshold in less than a week…and that’s fantastic!  But there’s another VERY deserving crowd-funded fan project whose donation total isn’t climbing nearly as quickly…and that’s a shame.

PACIFIC 201 promises to be one of the most original, most intriguing, and (dare I say it?) most ENGAGING Star Trek fan films to come along in quite a while.  The first fan film (or any Star Trek film, for that matter) to cover the period smack dab in the middle between the end of Enterprise and the beginning of TOS, the time period of Pacific 201 is the turn of the 23rd century, 40 years after the founding of the United Federation of Planets.  It’s a critical period for Earth, still reeling from the horrors of the Romulan War but just beginning to emerge from fear and paranoia with a tentative first step back into the exploring of strange new worlds.

With physical sets and well-designed costumes, real actors, and some awesome visual effects, Pacific 201 looks like it could easily justify the $50K crowd-funding limit set forth the in new guidelines.  So far, their Indiegogo campaign stands at “only” $27,327.  They can raise another $23K, people…and we can all help them get there!  I just now put another $25 into the project, doubling my previous donation from last November.  Can you match me?

If everyone who reads this blog will match my $25 donation, show-runner Eric Henry will easily make his $50K goal to keep his studio open and finish production.  But hey, even $10 from each reader translate to $10K.

And if you want to see what what you’ll be getting for your money (since perks are now a no-no), here’s their latest teaser video:

Fans have been waiting  for PACIFIC 201 with an eagerness and anticipation that has only been matched a few times in fan film history. Renegades, Horizon, and Axanar (to name a small few) were also sensations long before they had very much to actually show on YouTube.  And when they finally released full trailers, well, fans went wild.

For the last year or so, fans have been teased with a glimpse of what Pacific 201 will be.  The year is 2200, forty years after the Romulan War, and Earth is still hesitant to trust the galaxy.  The desire to explore space faded during the first few years of the NX program, helped along by the Xindi and Romulans, and was replaced with fear and trepidation about seeking out new life and new civilizations.  But now Earth is just beginning to shake off its post-traumatic paranoia, and the starship Pacific NCC-201 is the first vessel in decades to head out with scientists aboard alongside Starfleet military.  Can humanity conquer its fears and truly embrace its destiny among the stars?

Pacific 201 raised $26,000 during a Kickstarter back in 2015.  And then it raised another $26,000 in an Indiegogo campaign from early this past summer.  That campaign had a goal of only $20,000, and having topped the goal, it is still active as an “in demand” status…meaning Pacific 201 can continue to collect donations.

This fan production was originally set to film in a warehouse facility being donated to them for free.  But sadly, that offer is no longer available.  They’ve acquired use of a new facility, but it will now cost them to film there.  So Pacific 201 is endeavoring to raise additional funds through their Indiegogo page.  Trust me, you’re gonna want to go there and make a donation after you watch their new teaser video below…